How about Equal Time for the Truth? 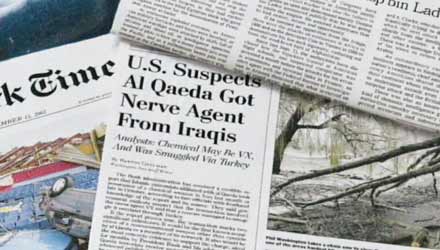 Mark Twain said: “A lie can travel halfway around the world while the truth is still putting on its shoes.” Ironically, he didn’t. The quotation should correctly be attributed to Jonathan Swift. The lie remains in high orbit.

Even when the truth comes to light, it gets nothing close to the wide distribution of the original disinformation. Liberal and conservative historians agree that the Tonkin Gulf incident, as described to Congress by an LBJ out to lie the country into invading Vietnam, never happened; how many Americans know that? Despite the absence of evidence, 40% of Americans believe the 2020 presidential election was stolen. Corporate media promoted the outlandish theory that Russia bombed its own natural gas pipeline and now admit there’s no way that’s true; even well-read and well-informed news consumers can be forgiven for having missed the blink-and-you’ll-miss-it retractions.

Can we fight the “psyopcracy,” a media environment saturated by sophisticated psychological operations that create an alternative reality designed to expand U.S. influence overseas and stifle dissent in the U.S.?

The challenge is enormous. Political partisans prefer news content that confirms their pre-existing biases. And corporate media outlets, having long abandoned oppositional coverage of the political class in favor of access journalism, are happy to help. Corporate bosses save expenses by allowing reporters not to have to check things out as long as those things are uttered by an official, wearing a suit. Why not dish out (free) government propaganda?

We may not be able to win the fight for journalistic integrity. But we should define what winning, or at least, starting to win, might look like.

In states like Utah, Michigan and Wisconsin newspapers, broadcast outlets and other journalistic organizations that publish a libelous story can dodge a defamation lawsuit by quickly issuing a retraction of equal or greater prominence than the offending article. The correction should amount to the same or a greater number of words or broadcast time, feature a headline of equal or greater size, appear in a similar font of equal or bigger size, and be placed at least as prominently as the original, mistaken piece. If the defamatory material appeared on the front page, a page 33 retraction is deemed inadequate.

Dictating similar remedies on the federal level would not pass constitutional muster. But the following thought exercise is useful when, considering the standards that ought to be voluntarily adhered to by media organizations. Imagine, if you can, in this day of spin and bluster, that media outlets who publish misinformation and disinformation — specifically, those that do so intentionally, after having been made aware of serious doubts about the material — were required to give equal prominent to the corrections after they got a story wrong.

Though I empathize and sympathize with individual victims of libel, my concern here is major-league fraud, perpetrated against readers and news consumers, in some instances so severe that they can provoke international conflict.

What if we lived in a world where all the journalistic enterprises that distributed George W. Bush’s lies about Saddam Hussein’s purported weapons of mass destruction and supposed ties to Al Qaeda had been required to run the same number of stories, at the same word count, at equal levels of prominence, about the fact that Bush and his minions had lied the country into a war that killed a million Iraqis and destroyed America’s reputation around the world? Countering Bush’s propaganda with an equal flow of anti-Bush truth might have prompted voters not to reelect him in 2004.

Instead, half of Republican voters still believed, 12 years after the invasion in 2015, that the US had found WMDs in Iraq. It did not. If you don’t think delusions like that have widespread, political, implications, or that some of those Republicans might have become Democrats if they knew the truth about George W. Bush, I have a war I’d like to sell you.

Some journalists might worry about a chilling effect. What if a newspaper was more reluctant, more cautious to go with a story that they weren’t totally sure about? What if they were required to take an extra day or two to verify their assertions? What, if, in such cases, rather than endlessly repeating the same narrative, they published it fewer times? It’s hard to see how any of these consequences would pose a threat to a vibrant and free press.

Of course, the truth deserves more than equal time with lies. People who fall for the lies can easily miss, subsequent truthful, retractions.

Ted Rall
http://rall.com
Ted Rall is a syndicated political cartoonist for Andrews McMeel Syndication, WhoWhatWhy.org and Counterpoint. He is a frequent contributor to The Wall Street Journal, a graphic novelist and author of many books of art and prose, and an occasional war correspondent. He is, recently, the author of the graphic novel "The Stringer."
You must be logged in to post a comment.