SYNDICATED COLUMN: Still Trust Them? Now the Government Is Tracking You So It Can Steal Your Car 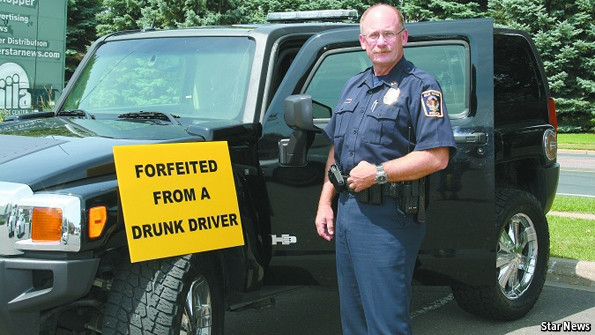 According to federal government documents released under the Freedom of Information Act, federal and local law enforcement agencies are using incredibly sneaky technology to track you as you drive the nation’s streets and highways. Their goal? Stealing your car.

This latest scandal — a mash-up of privacy violations on a wide NSA-like scale, corrupt asset forfeiture programs that make a mockery of the U.S. as a nation that respects private property rights, and brazen targeting of lawful gun owners — is a perfect political storm, an outrage that ought to bring liberals, libertarians and conservatives together in an alliance of freedom-loving people against an out-of-control government.

Given the collective shrug elicited by the Edward Snowden revelations, however, expecting a big reaction may be unrealistic.

In the shell of a nut: the ACLU has learned that the DEA and local police departments are scanning every motorist’s license plate as they drive down American streets. The NYPD and LAPD have each already collected hundreds of millions of time- and place-tagged license plate scans. One private security corporation sells its composite list of 2 billion scans to any police department or government agency that wants it. The Department of Homeland Security is teaming up with Immigration and Customs Enforcement to build and maintain a national database of license plate data to be shared with other parts of the U.S. security state apparatus.

They want your cash.

“Asset forfeiture” programs have become big business for law enforcement. Relying on dubious interpretations of the Constitution’s prohibition against unreasonable search and seizure, American police agencies are taking in billions of dollars a year from people they arrest. “Since 2008, thousands of local and state police agencies have made more than 55,000 seizures of cash and property worth $3 billion under a civil asset forfeiture program at the Justice Department called Equitable Sharing,” according to The Washington Post.

If you think they’re confiscating the mounds of coke and machine guns they find in a drug kingpin’s trunk, think again. Pulled over for DUI? They take your car, sell it at auction and pocket the proceeds, or keep it for the cops’ own use. That’s on top of whatever jail time and fine the judge hands you if you get convicted.

Even if you’re found not guilty, they keep your car. And/or your cash. And/or jewelry. Anything valuable. Anything they want.

“No criminal charges are necessary for such seizures, and under federal and state laws, authorities may keep most or all seized assets even in the absence of formal charges. Countless innocent Americans have been victimized by what critics call legalized government theft,” according to The Wall Street Journal. “Police have made cash seizures worth almost $2.5 billion from motorists and others without search warrants or indictments since the terrorist attacks of Sept. 11, 2001,” says the Post. “Police spent the seizure proceeds with little oversight, in some cases buying luxury cars, high-powered weapons and military-grade gear such as armored cars.”

Talk about un-American: these renegade robber-cops are traitors.

Police have been so pleased with the money and other goodies they nab through asset forfeiture programs that they send officers to seminars that teach them how to maximize their take. Some victims have complained, and successfully proven in court, that they were targeted and entrapped by police whose motivation to detain and arrest them was solely to steal their possessions — but it’s expensive and time-consuming.

Among the money-making schemes cooked up by greedy cops was a 2009 plan by the DEA to “work closely” with officials of the ATF (Bureau of Alcohol, Tobacco, Firearms and Explosives) “in attacking the guns going to [redacted by government censors] and the gun shows, to include programs/operation with LPRs [license plate readers] at the gun shows.”

But the DEA and ATF didn’t care about gun violence. “One internal email acknowledged that the tracking program’s primary purpose is civil asset forfeiture,” the Journal reports. They planned to set-up checkpoints around gun shows, search attendees’ cars using the pretext of a traffic stop, and arrest drivers on whatever charge they can come up with — some legit, others ginned up, in some cases no indictment at all — as an excuse to take their money and their cars. Which, even if they beat the rap, the cops get to keep.

The UK Guardian reports: “According to DEA documents, the primary goal of the program was to seize cars, cash and other assets belonging to criminals. However, the [license plate reader] database’s expansion ‘throughout the United States,’ as one email put it, also widened law enforcers’ capacity for asset forfeiture.”

“It’s deeply concerning and creepy,” lawyer Clark Neily of the libertarian Institute for Justice told the newspaper. “We’re Americans. We drive a lot.”

It is also disgusting, cause for the immediate firing of every “law enforcement” official who has overseen an asset forfeiture program, and a perfect illustration of why only an idiot would trust the government.

(Ted Rall, syndicated writer and cartoonist for The Los Angeles Times, is the author of the new critically-acclaimed book “After We Kill You, We Will Welcome You Back As Honored Guests: Unembedded in Afghanistan.” Subscribe to Ted Rall at Beacon.)

This came out of a conversation with fellow cartoonist Matt Bors about how Americans who sat on their asses when Bush stole the election(s) are applauding Iranians who take to the streets in the same situation.