The Left Must Continue to Avoid the Ukraine Trap 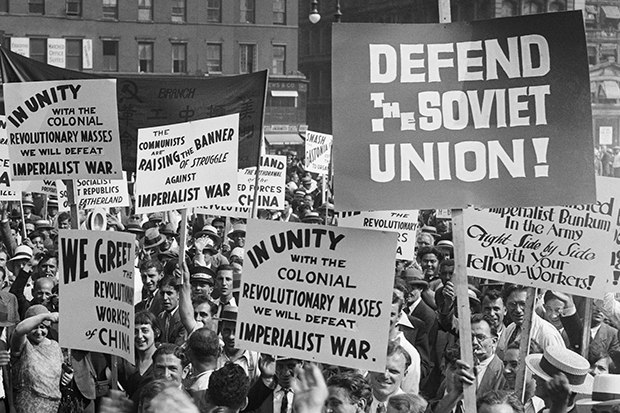 “Find a way to be against the war in Ukraine, please.” That was the subject line of one of my recent hate emails. “If you look through Mr. Rall’s cartoons for the past month, there isn’t a single one condemning Russia’s invasion of Ukraine,” an anonymous online commentor chided. “There’s plenty of ones based around whataboutism condemning us for condemning them but not a single one that just comes right out and says what Russia is doing now is wrong.”

The Right—in the U.S. that includes Republicans, Democrats and corporate media—has set a clever trap for the antiwar Left. The rhetoric in this essay’s first paragraph is an example. If the Left were to support Russia’s invasion of Ukraine, the Right would portray us as Russia-loving hypocrites who only oppose wars when the United States starts them. If the Left backed Ukraine, they’d be joining an unholy alliance with a government installed in a CIA-backed coup, that pointlessly provoked Russia by asking to join NATO and is so tolerant of neo-Nazism that it allows soldiers wearing Nazi insignia in its military and is seems to be trying to set some sort of record for building statues to World War II Nazi collaborators and anti-Semites. Plus they’d be helping the Right distract people from the murderous sins of American imperialism, which are ongoing.

Stuck between these two unappetizing prospects, the Left has wisely chosen not to pick sides. Instead, we are pointing out that militarily-aggressive America is too hypocritical to criticize Russia—a stance the Right describes as “whataboutism.”

So the Right is trying to force us to choose sides.

Free speech used to include the right not to speak. No more. New York’s Metropolitan Opera, wallowing in cheap post-9/11-style neo-McCarthyism, fired star soprano Anna Netrebko, a Russian national, because she refused to condemn Russian President Vladimir Putin, and replaced her with a Ukrainian. This was after she criticized the invasion. A Canadian concert canceled an appearance by pianist Alexander Malofeev because the program’s artistic director claimed he could not “in good conscience present a concert by any Russian artist at this moment unless they are prepared to speak out publicly against this war.”

Cancel those who refuse to regurgitate the words we stuff down their throats! Cancel them all!

I refuse to be told what to think and what to say, particularly by the Right. That goes double when the matter involves a complicated foreign policy crisis. I need time to dig into the facts, double- and triple-check and consider where I stand. Whether a hard sell emanates from a realtor, car salesperson or editorial writer at a newspaper, anyone who tries to bully me into a quick decision in their favor gets my freezing-cold shoulder. Threats and ultimata get nowhere fast.

To the extent that anyone should care about Ukraine, they’re in good hands with the Right, which is covering up Ukraine’s neo-Nazis and their ethnic cleansing of the Roma, sending them billions of dollars in cash and weapons and risking thermonuclear war by threatening regime change against Russia. Ukraine doesn’t need the Left too.

We on the Left do not owe anything but ferocious opposition to the political and media establishment that gave us the Afghanistan and Iraq wars. These are the same scum who legalized torture, kneecapped Bernie Sanders and insist that only rich people should be allowed to see a doctor. The Right never helps us, or our overseas allies. If they want to festoon social media and office buildings with Ukrainian flags, let them do it without us.

Any leftist who publicly expresses support for Ukraine and/or criticizes Russia in the current media environment, awash in imperialist propaganda at a fever pitch, is a rube, a dupe, an idiot. A leftist who takes even a second of attention away from the U.S.-created famine in Afghanistan gives aid and comfort to gangster capitalists and allows the butchers of Guantánamo and Fallujah and the Salt Pit to get off scot-free. Jumping on the Ukraine war bandwagon would be the height of tactical foolishness and a betrayal of the fundamental values of the Left.

For the Left, change has to begin here at home.

American leftists are citizens of the wealthiest nation on earth, its biggest and most aggressive military power, backer of the most important currency and, since 1945, so influential that it unilaterally decides whether a place is to be internationally recognized as a nation-state and whether or not its government is legitimate. Whether directly in countries like Vietnam, Panama and Bosnia or by proxy in conflict as in Syria, Yemen and Somalia, the United States has been a key player in almost every major war in the world for decades. The total death count attributable to U.S. forces and proxies in illegal and unjustifiable wars is incalculable, but it numbers in many millions.

The United States starts and prolongs more wars of choice than any other country. Leftists who live in the United States therefore have a special responsibility to work to destroy our country’s cult of militarism.

This is not to say that the Left cannot or should not have opinions about distant conflicts and foreign policy dilemmas on the other side of the planet. It’s a matter of priorities — when you live in a country as powerful and influential as the United States, it makes more sense for the domestic Left to marshal its resources to protest and campaign against America’s own actions as an empire than to worry about, say, China possibly invading Taiwan.

At this writing the United States is backing Saudi Arabia in its brutal campaign in Yemen. The reprehensible torture and detention camp at Guantánamo Bay remains open. Palestinians in Gaza continue to suffer under occupation by Israel, a staunch U.S. ally. Afghans are starving to death in large part because the United States refuses to release Afghan government money to the new Taliban government. These atrocities are directly attributable to the United States.

The more we think and talk about Ukraine, the less we work on our own country, which we have a much better chance of changing.

Rallies and protests directed at your own country, from inside your own country, are infinitely more effective than those that take place overseas. Millions of people marched against invading Iraq in 2003 all over the world. Even though the Bush administration ultimately went to war, the Americans who stood up against their own government right here got far more attention in Washington. The Right’s warmongers didn’t care what the French or the Japanese thought, and why should they?

Conversely, there were hardly any major protests against the invasion and occupation of Afghanistan in the United States, though there were many overseas. The Afghan war probably would have ended sooner if we Americans had demonstrated in a sustained way.

The Left is concerned about many issues. So one of our biggest enemies is distraction. As the 1950s civil-rights song goes, keep your eye on the prize! Police violence, veterans committing suicide, healthcare, the income gap, climate change, homelessness, and a Congress that spends billions of dollars on weapons for Ukraine while kids go into debt to attend college are problems that no one but the Left is going to care about, much less try to fix. Russia’s actions in Ukraine are a big fat distraction on the other side of the planet at a time when we have a lot to do right here at home.