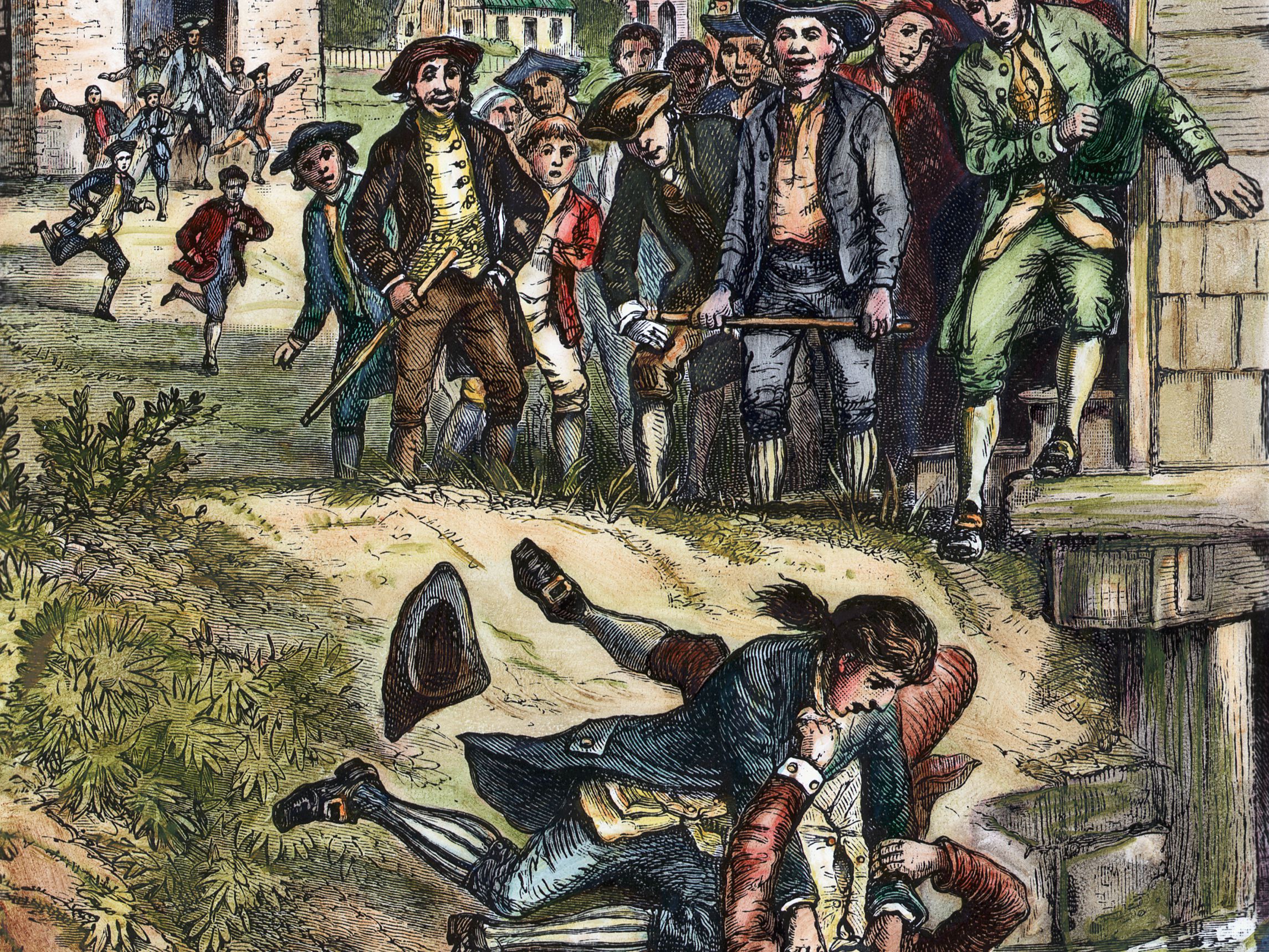 In line with other surveys taken in the run-up to the anniversary of the January 6, 2021 Capitol Hill riot, a new NPR/Ipsos poll finds that 32% of Republicans and 22% of Democrats say that political violence is sometimes justified. The media is going nuts—as usual.

Fearful expressions that we might lose our democracy to an act of terrorism, coup attempt, assassination or another form of brute force have been a staple of official propaganda for years. A December 2021 study published in the Proceedings of the National Academy of Science notes: “Since 2016 we counted 2,863 mentions of political violence on news television, more than 630 news stories about political violence, and over 10 million Tweets on the topic of the January 6th riot alone.”

Politicians of all stripes constantly state that, as Trump commented after the 2017 Unite the Right march in Charlottesville, political violence “has no place in America.”

These rote declarations are completely divorced from reality.

Contrary to the wishful thinking of many commentators, the United States of America is not Switzerland. From the Shay’s and Whiskey rebellions to the Civil War and the urban uprisings of the 1960s to the 2014 Bundy standoff, there is nothing new about the fact that, in many Americans’ minds, violence sometimes does solve things. We are a restive people frequently divided by great questions that go unresolved for long periods of time. On occasion such a clash results in a refusal to peacefully acquiesce to accept government authority.

Our republic rests upon a paradox. We teach schoolchildren that in the late 18th century the personal assessment of some colonists that the British government was unjust followed by their decision to take up arms was not merely justified, but noble and heroic. In the 21st century, however, any analogous judgment that this government is corrupt and unresponsive to their needs is beyond the pale—and an armed revolt would be the act of treasonous maniacs.

One is reminded of Qin Shi Huang, the emperor who brutally conquered six rival kingdoms, killed more than a million enemy soldiers, declared himself emperor of unified China and only then self-servingly recast himself as a great lover of peace. Revolution that installs me is good; revolution against me is bad.

Like many other independent states the United States was born in the blood and fire of a violent uprising. Washington, Jefferson and the other Founders were insurrectionists, separatists, traitors to the crown and — considering their considerable wealth, power and privileges—ingrates to boot. “Violence never wins,” Vice President Mike Pence said on January 6th—speaking near a rotunda that displays sculptures of men who won a new country by unleashing political violence against the regime of George III.

Adding to our national cognitive dissonance over the legitimacy of political violence is the problem of the Confederacy—the biggest armed rebellion in our history and one for which no one was ever held legally accountable. Signaling that Southern secession might not really have been that wrong after all, the victorious North opted not to prosecute Confederate President Jefferson Davis for fear that he would be able to prove the legality of southern secession at trial. In 1868 President Andrew Johnson expanded on Lincoln’s plans and issued amnesties and pardons for all former Confederate soldiers, officers and political leaders willing to swear allegiance to the U.S.

Until last year’s Black Lives Matter protests (which included the successful deployment of violence alongside nonviolent protests) prompted officials in cities like [deleted “New Orleans and” 1/9/22—in fact, New Orleans removed their statues in 2017]  Richmond, Virginia to remove Confederate statues, the general attitude of white Americans on both sides of the Mason-Dixon line toward the insurrectionist South was one of forgiveness and bemused tolerance. Congress restored and President Gerald Ford approved the restoration of Confederate General Robert E. Lee’s citizenship, which had not been approved during his lifetime due to a paperwork mix-up, in 1975. President Jimmy Carter did the same for Davis in 1978. Tolerance for cultural expressions of white Southern “heritage” endured until recently; the startling stars-and-bars artwork painted on the orange Dodge Charger used in the 1980s TV comedy “The Dukes of Hazzard” only received pushback in 2020, when Amazon considered pulling the show’s archives from its streaming service.

To sum up the official line: the American Revolution was a fully-justified, admirable use of political violence (24,000 dead British soldiers) that created the best country ever. The Southern secession that attempted to cut the best country ever in half, a conflict fought mainly over slavery—resulting in the deaths of 620,000 people, 2% of the country’s population—was forgivable.

Political violence now, on the other hand, is not now nor ever will be, morally or legally permissible.

This is logically contradictory on its face. For a country almost constantly involved in military action throughout the last two centuries, many times in efforts to replace the governments of other countries, which uses assassination drones to murder political adversaries abroad and deploys the police to arrest and brutalize street protesters, to argue that political violence is inherently illegitimate is ridiculous.

It would make more sense to embrace a realistic stance closer to Jefferson’s famous reaction to Shay’s rebellion that “the tree of liberty must be refreshed from time to time with the blood of patriots and tyrants.” Preceding that line in his 1787 letter is a thoughtful musing followed by proto-realpolitik: “What country can preserve its liberties if their rulers are not warned from time to time that their people preserve the spirit of resistance? Let them take arms. The remedy is to set them right as to facts, pardon and pacify them.”