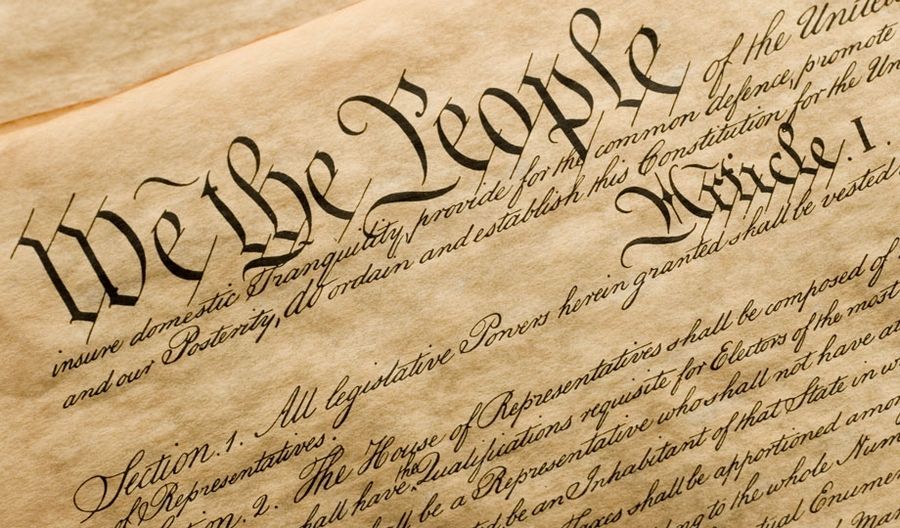 From the electoral college to gun rights to the hilariously archaic right to refuse to quarter troops in your home and the $20 threshold for a civil jury trial, the U.S. Constitution contains many head-scratching relics of an America we wouldn’t recognize. Living in the age of the musket, James Madison might not be so quick to argue for legalizing the AR-15, assuming that a well-regulated state militia was still a thing.

A work of genius the U.S. Constitution is not. It is almost impossible to amend—it is in fact the hardest to amend in the world. The immutability of the document is highlighted by the inability of the world’s most powerful democracy to enshrine a right as basic as gender equality, a principle that the vast majority of other countries, even dictatorships and authoritarian regimes, have managed to include (at least in theory) in their founding charters.

We haven’t successfully amended the Constitution in half a century—and barely then. Which is really weird. “Most liberal democracies—including the nice, stable ones in Western Europe—amend their constitutions with great frequency,” University of Chicago law professor Eric Posner pointed out in 2014: “Germany amends its Basic Law almost once per year, and France a bit more than once every two years. Indeed, most states in the U.S. amend their constitutions every couple of years.”

Because Americans are saturated from birth to death by “living document” propaganda about the eternal majestic genius of the Founding Fathers, the constitution is treated like a sacred stone tablet personally engraved by God rather than what it is, a 234-year-old train wreck. From progressive Democrats to right-wing Republicans there is no thought, much less political will, to suggest that this relic might be altered to better serve 21st century Americans.

We may not see its flaws, but everyone else does. As recently as 1987, most countries’ basic legal charters were directly or indirectly inspired by the American constitution. Not any more. “Among the world’s democracies,” a 2012 NYU law review study found, “constitutional similarity to the United States has clearly gone into free fall.” When a new country like East Timor or South Sudan emerges on the world stage now, their legal experts look for guidance to the more modern constitutions like those of Canada, India, South Africa and New Zealand. The right to travel, the presumption of innocence and entitlement to food, education and healthcare—standard rights around the globe—are absent from the U.S. Constitution. The climate crisis should prompt consideration of a constitutional right of nature, as several countries have.

If we we’re a vibrant democracy, we should act like one. We ought to ask ourselves: if we were writing a Constitution today from scratch, what would it look like?

But probably not. It’s far likelier that popular opinion would prevail and that we’d choose our leaders the same way most of the world does. A 55%-to-43% majority of Americans told a January 2021 Pew poll that they would prefer the president to be elected by popular vote.

Lefties’ complaints about the not-guilty verdict in the recently-concluded Kyle Rittenhouse trial prompted me to start thinking about the question of what a 2021 Constitutional Convention would come up with. Legal experts weren’t surprised that Rittenhouse got away with killing two men and wounding a third. By every credible account, the jury followed Wisconsin law.

“America today: you can break the law, carry around weapons built for a military, shoot and kill people, and get away with it,” said California Governor Gavin Newsom. Well, yes. Not because the jury messed up. Because they followed the law.

Which means the law is the problem.

If you don’t think the law should allow a 17-year-old kid to take an AR-15 military-style assault rifle to a riot, play junior vigilante supercop and wind up shooting three people, I agree. The root of that craziness, however, is not to yell vague complaints about “the state of America”—it’s to repeal or amend the antiquated Second Amendment.

The constitutional right to keep and bear arms is a uniquely American oddity. Only two other nations besides the U.S. have one—Mexico and Guatemala. And those two countries’ gun laws are nowhere as liberal as ours. Mexico bans the sale or possession of automatic or semi-automatic firearms entirely; there’s only one gun shop in the whole country, on a heavily-guarded army base in Mexico City. Guatemalans can buy semi-automatic weapons, handguns, rifles and shotguns but only with a permit that is hard to get. And ammunition is rationed.

A brand-new United States freshly liberated from the yoke of British colonialism probably wouldn’t draft a Second Amendment as we know it. We’re no longer a rural society, 95% of Americans don’t hunt and guns have gotten bigger and scarier.

One of three Americans own a gun, so guns would probably remain legal. But there would be regulations limiting firepower and some sort of licensing regime. Following endless mass shootings, Americans currently favor stronger gun-control laws by a 64%-to-28% margin, according to an April 2021 Politico poll. “Almost half — 46%— said that limiting gun ownership was more important than protecting the Second Amendment, while 44% said that gun ownership rights were a higher priority,” reported The Hill. If gun rights made it into our new constitution, odds are that such a provision would be far weaker than what we have now.

But the Second Amendment, and all the rest, remains impervious to change. Which itself won’t change until we start asking ourselves: why?