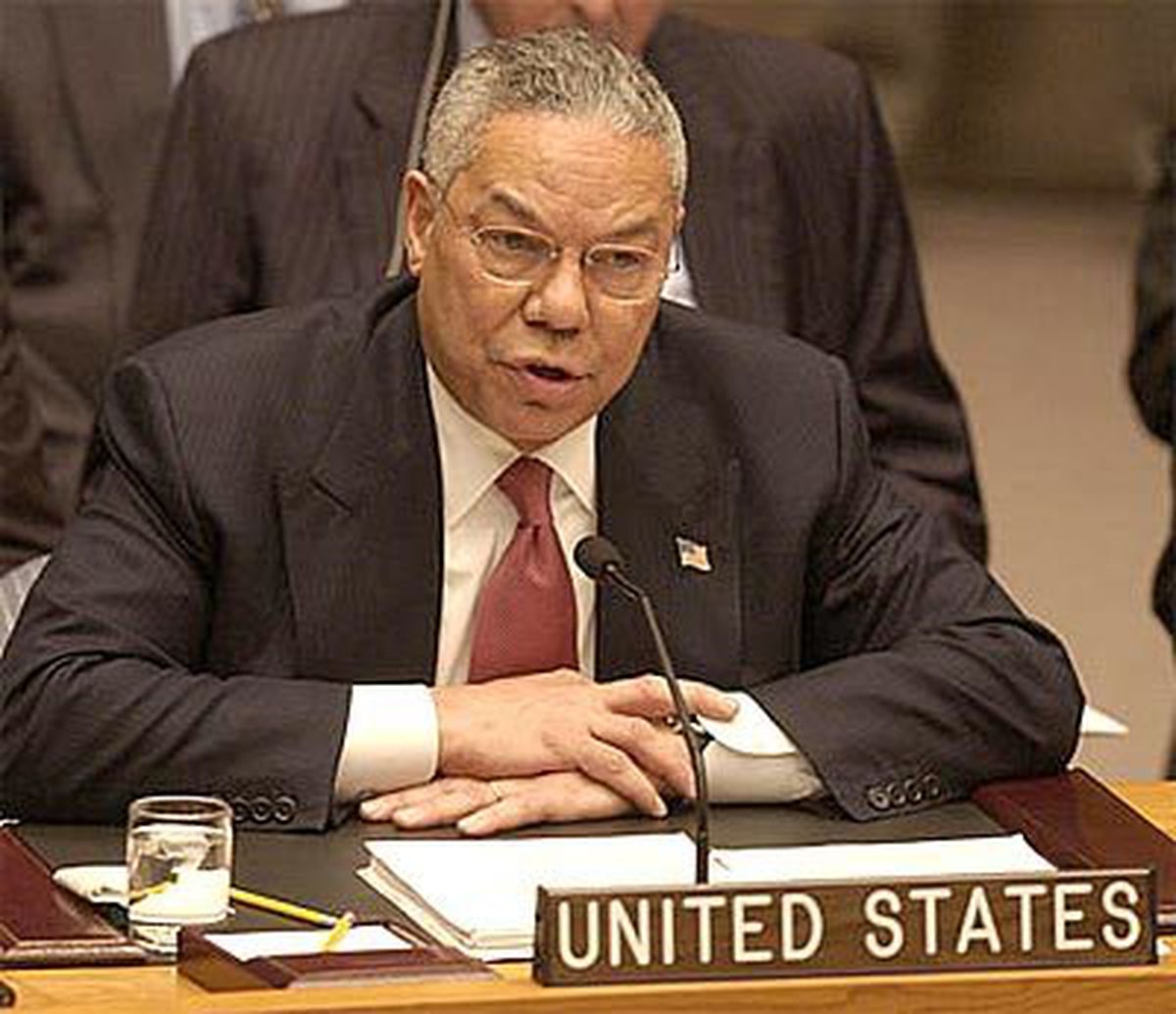 If Colin Powell’s life has meaning, it is as a cautionary tale about the perils of going along to get along.

Rarely has history offered such a stark example of a human being offered a clear existential choice between right and wrong. Hardly ever has so much hung in the balance for humanity and for an individual’s soul, as when then-secretary of state Colin Powell spoke to the United Nations to make the case for war.

It would be impossible to overstate the import of Powell’s February 2003 speech, in which he claimed that the United States had amassed a stockpile of evidence that proved that Iraq had retained chemical and biological weapons of mass destruction in violation of its commitments under the 1991 Gulf War ceasefire. Iraq’s government, Powell argued forcefully, presented such a clear and present danger to its neighbors that the international community—led by the U.S.—had a right, even a duty, to remove it with an invasion. President George W. Bush and his co-conspirators had spent the better part of the previous year working to convince Americans to support a second war against Iraq over WMDs. Polls showed that voters remained unconvinced.

Possibly in preparation for a 2004 White House run—hard to imagine in these polarized times, but the ex-general had long been considered a top presidential prospect by both major political parties—the even-tempered Powell had previously distanced himself from his fellow cabinet members, dominated as they were by neoconservative hotheads, throughout the first two years of his term. Powell’s credibility towered over everyone else in American politics to an extent rarely seen before and certainly never since.

When you join a gang, you’re required to prove your loyalty. “You’ve got high poll ratings,” Vice President Dick Cheney told Powell as he ordered him to support the push for war. “You can afford to lose a few points.”

Which is why Bush and Cheney sent him to the U.N. They knew that Powell alone could close the deal with a public made recalcitrant by historical precedent: the U.S. had never before launched a full-out war without a pretext that made some sort of sense. And Where the president had failed the prestigious Powell succeeded brilliantly, with the American public as well as with key allies like Great Britain and Australia. Seconds after he stopped talking, TV talking heads told us what we already knew: the fate of a million Iraqis was sealed. We were going to war.

There is an alternative universe in which Powell takes to the podium and tells the truth: there was no credible evidence that Iraq still had WMDs. I have often imagined the stressed-out secretary of state, music swelling Hollywood-style, beginning to read the litany of lies about anthrax, chemical decontamination trucks, falsified Iraqi death certificates and cooperation between Saddam and Al Qaeda—an alliance that not only was not true but could not have been true—before tearing up his prepared remarks. The statesman stares into the camera and speaks the words that would have saved a million lives, assured his place in history as a Profile in Courage™ and gotten him elected president by a landslide: “They told me to come out and lie to you. I will not. I swore to protect the Constitution of the United States, not the President of the United States, so help me God, and there is no evidence that Iraq has weapons of mass destruction.”

Powell fed the rube narrative in his 2012 memoir. “I am mad mostly at myself for not having smelled the problem. My instincts failed me,” he wrote, referring to the intelligence report he used for his U.N. speech that contained false evidence of supposed Iraqi WMDs. Powell never apologized.

Actually, Powell’s instincts were on point. His conscience went missing.

He knew it was all a lie.

The weekend before his speech, Powell exploded in frustration as he read the manufactured intel reports he had been given by the Bushies. “I’m not reading this. This is bullshit!” he shouted, throwing the cherry-picked documents in the air. Then he picked himself up, took a deep breath and went out and lied the world into a war that would forever soil America’s reputation.

Weakness was baked into Powell’s personality early on. As a young officer serving in Vietnam Powell played a minor but telling role in covering up a soldier’s report about war crimes and other atrocities committed by U.S. troops during the same period as the My Lai massacre. Rather than investigate the allegations, which were accurate, Powell smeared the whistleblower as a coward. The whistleblower’s career faltered as Powell’s soared.

Powell’s memoir made clear that he understood the gravity of his shilling for the Iraq War. “It was by no means my first, but it was one of my most momentous failures, the one with the widest-ranging impact,” he wrote. “The event will earn a prominent paragraph in my obituary.”