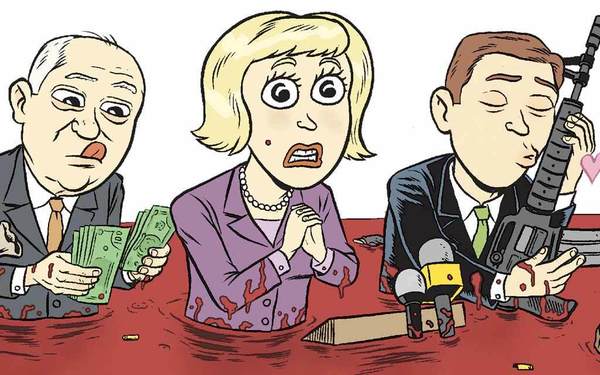 The news that Matt Bors is quitting political cartooning (though he will continue to work as a comics editor and cartoon in other formats) is a sad statement about the state of editorial journalism. In his mid-30s, a great draftsman who has received some of the profession’s top prizes, including a Pulitzer finalistship, Bors represented a possible future for American political cartooning. The fact that he decided drawing political cartoons was no longer worth his time — it’s not hard to guess that, like the rest of us, he watched his cartooning paycheck dwindle away to almost nothing — reflects poorly on the hundreds of editors at newspapers, magazines and websites who, day after day, choose not to run political cartoons at all, much less hire a staff political cartoonist to add to their stables of writers. Many of these editors are going to wake up someday, realize that editorial cartooning is dead and gone, and wonder what happened. They should look themselves in the mirror.

I was editor of acquisitions and development at United Media from 2006 to 2009. I signed Bors for syndication, we became friends, went to Afghanistan together in 2010. Things got fucked up between us when the LA Times targeted me for career termination in 2015. I miss talking to him about comics and politics. He is a smart guy.

Because he’s smart I’m sure he will go onto many bigger and better things. But I have to marvel at the fact that no editor at a newspaper, magazine or website ever called him to offer him enough money to keep a guy this smart and talented and passionate drawing political cartoons. That’s weird and one of the thousands of terrible decisions and non-decisions that have nearly destroyed journalism in this country.