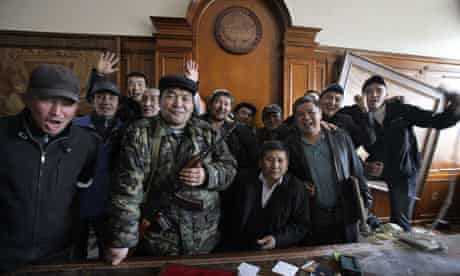 Terrified political leaders watched the police who were assigned to protect them melt away. They fled as an angry mob of hooligans, riled up by sketchy allegations of rigged elections, stormed up the stairs of the government building that hosted the debates and deliberations of their venerable democracy. The rioters, reactionary right-wingers from the nation’s rural hinterlands, rampaged through the corridors of power, smashing windows, vandalizing offices and looting files and furniture.

Political elites deplored the physical appearance and comportment of the protesters. “I’d like to believe and hope that the actions of a mob high on narcotic substances will not totally destabilize this republic,” remarked a top official of a neighboring country.

This scene didn’t take place at the Capitol. It occurred at the “White House,” the seat of parliament and the presidential staff in Bishkek, the capital of Kyrgyzstan.

In March 2005, the mob got its way. President Askar Akayev, the only leader of a former Soviet republic in Central Asia to have been democratically elected, fled into exile. The Tulip Revolution, as Western news media approvingly dubbed the coup, prompted the all-but-total collapse of the country’s economy and politics into chaos so intense that parts of the country have become a failed state where currency has stopped circulating. When I entered via Tajikistan in 2009, the illiterate border guards didn’t even have a stamp in order to mark my passport.

Those Kyrgyz mobs of Muslim young men from the conservative Ferghana Valley didn’t materialize by chance in 2005. They were trained and funded by you and me.

Scores of CIA agents permanently stationed in southern Kyrgyzstan trained a bunch of hicks to overthrow a northern-based secular government that had annoyed the Bush Administration. The Akayev regime’s real sin? Not fixing an election. It was their demand for higher rent payments from the U.S. to use Bishkek’s airport as a base for bombing runs into Afghanistan.

“It would have been absolutely impossible for [the overthrow of Akayev] to have happened without that help [from the U.S.],” said Edil Baisolov, who led an NGO financed by the U.S. government. Freedom House, a CIA cover operation masquerading as an NGO, published anti-Akayev newspapers. The U.S. Congress allocated $12 million a year under the Freedom Support Act toward undermining Central Asia’s sole democracy.

“Hundreds of thousands more filter into pro-democracy programs in the country from other United States government-financed institutions like the National Endowment for Democracy. That does not include the money for the Freedom House printing press or Kyrgyz-language service of Radio Free Europe/Radio Liberty, a pro-democracy broadcaster,” reported The New York Times. Bakiyev, the president who took over after the coup forced Akayev to flee, was himself trained in the U.S.

American media outlets loved the Kyrgyz insurrection. They grouped it with other CIA-backed “color revolutions” against the governments of Ukraine and Georgia, spinning the overthrow of Akayev, an intellectual physicist, as the liberation of the people from an authoritarian despot.

So please excuse me if I don’t shed geysers of tears over the traumas endured by the pampered lobbyist-fattened members of the House of Representatives and the U.S. Senate while idiots wearing horned Viking masks desecrated the hallowed hallways of the Capitol.

What happened on January 6th is infinitely less than chickens coming home to roost. A few hours of mayhem is but a tiny taste of the far greater violence and misery those 535 men and women vote to inflict on countries around the world. According to one study, the United States interfered overtly or covertly in the free elections of 81 foreign countries between 1946 and 2000. The U.S. tried to overthrow the president of Venezuela in 2002, invaded Afghanistan and Iraq where it replaced the local governments with puppet regimes, set off a war within the Palestinian Authority by trying to get rid of Hamas in 2006, and is currently trying to destroy Yemen, Syria, Iran and Libya, which thanks to the U.S. has become a failed state. This is by necessity a truncated list.

Here is true American exceptionalism. Our Congress throws billions of dollars a year at regime change operations around the globe but, with the exception of events like the 9/11 attacks, nothing happens here. Blowback is infrequent, relatively small-scale and never directly impacts the people who are responsible, i.e. the political class. Given that one of the few things Democrats and Republicans still agree upon is to finance the cash-bloated military, I don’t see that changing.

It would be nice, however, for the members of Congress who finance and arm the rampaging mobs that illegally overthrow the sovereign governments of other countries to take it on the chin when the same thing kind of, sort of, almost happens to them.