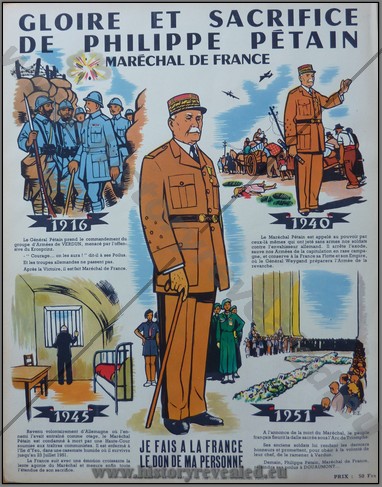 Not long ago, there was a country whose people were suffering a devastating moral, political and economic crisis. Before the crash they were certain of their place in the world; theirs was, even in the opinion of their adversaries, an exceptionally prosperous, powerful and politically vibrant civilization whose culture had disproportionate influence around the planet.

Then everything collapsed. Just like that, seemingly out of nowhere, they were laid low, lost, no hope in sight.

No one was sure why. But there was no shortage of scapegoats. The left blamed the right, the right blamed the left, and everyone wondered whether it was simply a meta case of nothing good lasts forever.

Before the collapse this nation had been a military and economic colossus, a superpower possessing one of the world’s biggest navies and one of its strongest armies. It controlled a vast empire. What had happened was unthinkable. Yet there it was.

This was France in 1940. In just six weeks, Germany—itself defeated and humiliated by France 20 years earlier—had invaded and subjugated this proudest of peoples. How, the French asked themselves, could they have been so unprepared? Why had their much-vaunted democracy, first in the West, failed?

In their time of need this desperate people turned to the leadership of a revered father figure, an elder statesman. His advanced age and halting manner worried some. (He was probably suffering from Alzheimer’s.) The leader “is good for three or four hours a day… but when he is tired, especially in the evening, you can get him to sign what you want without him realizing,” one of his ministers said at the time.

The old man’s politics included unwholesome dalliances with reactionaries. But he had a long record of service to the nation. His patriotism was unquestioned. He claimed not to have sought power; he had stepped up, he reassured the people, to protect and guide them through a terrible time. “I make France,” Marshal Philippe Pétain told the French after ordering the army to surrender, “the gift of my person.”

France should have returned that gift.

Some wondered whether, at age 84, Pétain was too old to understand that he was being used. Playing on his name, critics called him “maréchal péteux”—senile. The Marshal had certainly lost a lot of sharpness since World War I when he led the miraculous victory at the Battle of Verdun—“on les aura!” he had cried to his dispirited troops, deliberately echoing Joan of Arc—that many believed to have turned the tide of what had felt like a doomed war.

It is more likely that the Hero of Verdun, a vain and reactionary man who had always been stubbornly resistant to suggestions he might be on a wrong course, felt vindicated by the catastrophe. In his view, and he was hardly alone, louche liberalism had led France to a sorry fate. It was his fate to salvage the mess and keep the Germans at bay—and his opportunity to create a cult of personality under a pathetic sub-dictatorship.

As the rot of his brain proceeded, Pétain became apathetic and withdrawn, leaving the outright fascists in his puppet administration to collaborate with the Nazis enthusiastically. His government protected no one. It deported tens of thousands of Jews to Nazi death camps, tortured and shot members of the communist-led Resistance and turned over so much cash and food to the Reich that France soon had the highest hunger rate in occupied Europe. Today Pétain’s name is synonymous with weakness and treason.

Unless Trumpian legal challenges to mail-in ballots don’t trigger a 12th Amendment scenario, polls indicate that desperate Americans are about to turn to a father figure with visibly diminished mental capacity to lead them out of a deep crisis whose causes and nature they have not yet internalized.

While it is undeniable that Donald Trump’s initial non-response to the COVID-19 pandemic and his bizarre refusal to embrace basic medical protocols increased the economic costs and killed more patients, the fundamental causes of the crisis were structural: predatory corporate capitalism that long predated his presidency, a for-profit healthcare system without a social safety net, poor diet and obesity, staggering disparity of wealth, previous administrations’ outsourcing the manufacture of vital supplies such as masks, too much power vested in local and state governments.

I do not expect President Joe Biden to sell us out to foreign enemies. He will not fill his cabinet with proto-fascists, as did Pétain. Like Pétain, however, he has neither the vigor nor the vision nor  the political orientation required to get us through the coronavirus crisis or to correct the systemic flaws that made a terrible problem unnecessarily worse. When he was called upon to defend Anita Hill and block the confirmation of Clarence Thomas to the Supreme Court but enabled him instead, when he ought to have taken a stand for African-American men systemically condemned to draconian prison terms but joined the racist jail-them-all crowd, when he had doubts about the Obama Administration’s decisions to destroy Libya and Syria and remained silent—whenever he was required to stand tall and speak up—Biden failed the test of leadership. And that was when he was a more lucid, younger man.

Not unlike Pétain, Biden seems unable to work more than a few hours a day.

If Biden wins, only three things can save us from this crisis. If he dies or is incapacitated and President Kamala Harris turns out to listen to better angels she didn’t reveal as DA, we may have a shot at recovery. If Biden’s cabinet turns out to be a remarkable collection of Best and Brightest and he serves as their figurehead, we could muddle through. If the American people rise up and overthrow this corrupt and moribund government and replace it with one that serves our needs, and we somehow manage to avoid the despotism that often follows revolution, we might emerge better than ever.

I am not optimistic.