If Biden Loses, This Will Be Why 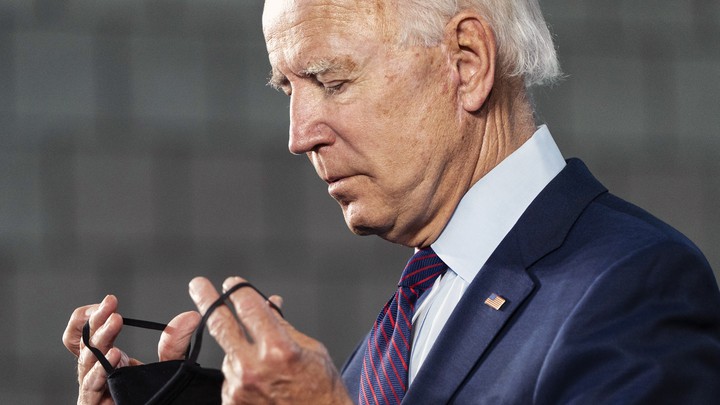 It would be a stretch to say that Joe Biden is in trouble. He is ahead in the polls, including in states where Donald Trump won last time. Unlike Trump, who is nearly broke, Biden’s campaign is raking in corporate donations.

Of course, Democrats couldn’t have asked for a weaker incumbent. Nearly 200,000 Americans dead of COVID-19 after the president downplayed the threat and failed to provide relief, tens of millions of people newly unemployed months away from the election, polls showing that a record number of voters believe the country is headed in the wrong direction, supplemental unemployment benefits expired with no sign that they will ever be renewed. Almost any other candidate would be poised to trounce Trump by double-digit landslide of historical proportions.

The two crazy old white men with bad hair are in a dead heat in key battleground states like Florida. As one would expect during a normal year—when the president had not just killed a bunch of voters and made a bunch of others jobless—the race is tightening. Biden is still ahead by seven points nationally but that’s not significantly better than Hillary Clinton was doing at the same point in time. A worried Bernie Sanders has been advising Biden to nix his vague rightward pivot and articulate stronger stances on bread-and-butter issues.

More than any other single factor, I am focused on the enthusiasm gap. Anyone who counts yard signs and bumperstickers can see that Trump’s supporters are fired up while Biden’s are dutifully going through the motions, motivated primarily by their desire to unseat the incumbent.

Like most elections in recent years, 2020 isn’t about swaying swing voters on the fence. It’s a turnout game. Whoever gets more of their baked-in supporters to the polls wins. Not only are Biden’s supporters not all that into him, more of them are scared of the coronavirus than Trump’s people—and that could make all the difference when they decide whether or not to leave their homes on Election Day.

Then there’s the debates. Biden could exceed expectations. But those expectations are there for a reason. Biden has never been a good debater; he was awful during the primaries. He is well past his expiration date. He is easily rattled (“lying dog-faced pony soldier”) and Trump is a master rattler. Debates could destroy Biden.

Setting aside the almost inevitable constitutional crisis caused by the system’s inability to deliver and process an expected 80 million mail-in ballots, there is a real chance Donald Trump could straight out win.

At this point, there are still several things that Biden could do to maintain and even expand his lead over the president. If I were advising him, I would tell him to do the following:

Nail Down the Base. The progressive Democrats who supported Bernie Sanders and Elizabeth Warren during the primaries are not, contrary to statements by the old liberal centrists, “purity ponies” determined to punish the Democratic Party because their preferred candidate didn’t win. They are driven by policy—and so far the Biden campaign has refused to throw them any red meat. Democrats can truly unify the party in November by getting Biden to campaign on at least one major issue dear to progressives, like Medicare For All, the Green New Deal, or swearing off wars of choice. It would be smart to add in some minor promises with symbolic residence, like prosecuting CIA torturers, Closing Gitmo, eliminating drones, refusing to prosecute Julian Assange and allowing Edward Snowden to come home. Progressives don’t need the whole cow. But you do have to throw them a bone, or risk losing them the way Hillary did in 2016.

Weasel Out Of the Debate. If he followed this advice, I would be even more determined not to vote for him. Denying voters the right to watch candidates answer questions about themselves and their stances is profoundly undemocratic. Still, ethics aside, debating can only help Trump. If I were Biden, I’d refuse to prove to the country what every honest person who has been paying attention knows: he is suffering from dementia.

Announce an Agenda for the First 100 Days. Biden likes to compare himself to FDR. Like FDR, he should announce his agenda for his first 100 days in office. That way, should he win, Republicans won’t be able to argue that he didn’t earn a mandate for specific changes. During this time of medical and socioeconomic crisis, Americans crave specific solutions to their problems. While it is true that staying vague frustrates the writers of GOP attack ads, it also feeds the suspicion that Biden, like Obama, is all hat and no cattle when it comes to trying to legislate big changes.

Personnel Is Policy so Appoint Personnel Now. Progressives were let down in a big way by the choice of right-wing prosecutor Kamala Harris as Biden’s vice president. Biden supporters’ most frequently uttered talking point is that he would appoint better qualified cabinet members than Trump has, but keeping losers like Lawrence “Women Can’t Do Math” Summers among his closest advisors and compiling a foreign policy team so full of neoconservatives that only Dick Cheney is missing doesn’t inspire confidence. Writing a blank check doesn’t make sense anymore. Let’s see some of those cabinet appointments now, before we vote.

Campaign in Person. Last but not least and probably most controversially, Biden needs to hit the road like COVID-19 never happened. Elections are job interviews and Donald Trump seems to want the gig. Biden doesn’t. He needs to appear in public, distance socially, no mask, heavy schedule of in-person appearances. Most Americans venture out in public every single day these days and manage not to contract COVID-19. Surely Biden’s handlers can figure out how to do the same for their candidate.