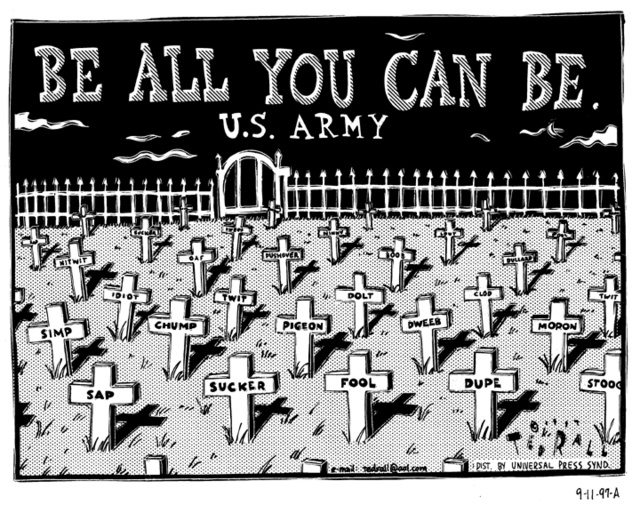 Jeffrey Goldberg wrote an article for The Atlantic that could harm Donald Trump’s chance to win re-election. Setting aside the controversial content of the remarks attributed to the president, it is important to note that this is an atrocious example of journalism.

You could almost call it “fake news.”

And corporate media is taking it at face value.

You may think Trump is a turd—I do. You may want him to lose the election—I do. (I also want Biden to lose, but that’s another column.) You may believe that Trump probably said what Goldberg reports—I think there’s a good chance. But everyone who cares about journalism ought to be deeply disturbed by the nonexistent sourcing for this story and its widespread acceptance by media organizations that ought to know better.

It’s easy to see why Democratic-leaning media corporations jumped all over Goldberg’s piece: it hurts the president and it reinforces militarism. But they’re degrading journalistic standards to manipulate an election.

According to Goldberg, four anonymous sources told him that Trump called American marines who died in World War I “losers” and repeatedly questioned why anyone smart would join the military or be willing to risk their life by fighting in one of America’s wars.

Anonymous sources have their place. I have used them. But basing a news story entirely on accounts of people who are unwilling to go on the record is journalistically perilous and ethically dubious. There are exceptions, as when a Mafia source fears physical retribution.

There is no such claim here. Most media organizations’ ethical guidelines are clear: news without attribution is not news. It is gossip.

The Los Angeles Times, a publication my readers know that I hold in low regard, nevertheless takes a stance against anonymous sources. “When we use anonymous sources, it should be to convey important information to our readers. We should not use such sources to publish material that is trivial, obvious or self-serving,” the paper’s ethical standards say. “An unnamed source should have a compelling reason for insisting on anonymity, such as fear of retaliation, and we should state those reasons when they are relevant to what we publish.”

Likewise, writing that strips statements of necessary context is anti-ethical. Trump, writes Goldberg, “expressed contempt for the war record of the late Senator John McCain, who spent more than five years as a prisoner of the North Vietnamese. ‘He’s not a war hero,’ Trump said in 2015 while running for the Republican nomination for president. ‘I like people who weren’t captured.’” He goes on to note that Trump wanted to deny McCain the honor of lowering flags to half-mast after McCain died.

Goldberg frames Trump’s comments as part of a general bias against the military and portrays his attacks as unprovoked. Truth is, long before Trump made those comments he had been engaged in a well-documented, long-running feud with the Arizona senator. McCain based his political career on his military service and the five years he spent as a POW in Vietnam. McCain was Trump’s enemy, and there is considerable evidence that McCain—known for a sharp tongue—started the war of words. Trump gave back in kind.

“Nor did he set his campaign back by attacking the parents of Humayun Khan, an Army captain who was killed in Iraq in 2004,” Goldberg continues in another context-free passage. Khan’s father famously spoke against Trump at the 2016 Democratic National Convention. “You have sacrificed nothing and no one,” Khan said. In Trumpian terms, Khan started it. But Goldberg’s omission makes it look like Trump attacked a fallen soldier out of the blue.

Goldberg does this a third time: “When lashing out at critics, Trump often reaches for illogical and corrosive insults, and members of the Bush family have publicly opposed him.” Both sides have insulted each other; as far as the record shows, Trump is usually running offense, not defense—but Goldberg falsely portrays the enmity as a one-way street.

One of the praiseworthy aspects of this president is his relatively restrained approach to military interventionism, coupled with his willingness to directly engage adversaries like North Korea and the Taliban in Afghanistan, the latter which recently signed a peace agreement with the United States. It is logical for Trump, who is skeptical of illegal wars of choice like Afghanistan and Iraq, to question why people would volunteer to fight and possibly die in such a pointless conflict. For Goldberg, militarism is a state religion. Questioning it is intolerable.

Goldberg’s piece, the tone of which reads like the pro-war hysteria following 9/11, reflects the aggressively militaristic neoliberalism of the Democratic Party in 2020.

Goldberg references Trump’s 2017 visit to Arlington cemetery with then-Secretary of Homeland Security John Kelly. “A first lieutenant in the Marine Corps, Robert Kelly was killed in 2010 in Afghanistan … Trump, while standing by Robert Kelly’s grave, turned directly to his father and said, ‘I don’t get it. What was in it for them?’ Kelly (who declined to comment for this story) initially believed, people close to him said, that Trump was making a ham-handed reference to the selflessness of America’s all-volunteer force. But later he came to realize that Trump simply does not understand non-transactional life choices.”

Joining the military, of course, is hardly a non-transactional decision. Soldiers get paid. They get medals. They get free college. They are revered and thanked for their service. Military service gives you a leg up when you run for political office.

Moreover, Trump’s question is one Americans should be asking more often. Why would a 29-year-old man volunteer to travel to Afghanistan in order to kill the locals? No one in that country threatened the United States. No one there did us any harm. Afghans don’t want us there. Why did Robert Kelly go?

Goldberg seems obsessed with Trump’s description of fallen soldiers as suckers. “His capacious definition of sucker includes those who lose their lives in service to their country, as well as those who are taken prisoner, or are wounded in battle,” Goldberg writes. But is he wrong?

LBJ suckered us into Vietnam with the Tonkin Gulf incident, which historians of all stripes accept was a lie.

George H.W. Bush suckered us into the first Gulf War with a tale of Iraqi soldiers rampaging through a Kuwaiti hospital and pulling babies out of incubators. Another lie.

After 9/11 George W. Bush suckered us into Afghanistan by saying Osama bin Laden was there—he was not.

Of course Bush lied about Iraq having weapons of mass destruction. More suckering. (At the time, Goldberg spread the lie that Saddam Hussein was allied with his enemy Al Qaeda.)

Assuming that anything in Goldberg’s piece was true, Trump was right.