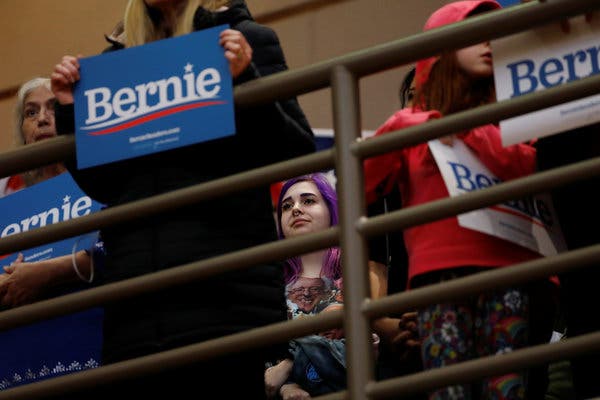 To the extent that they ever did, the editorial boards at corporate-owned media outlets no longer seem to be helping the candidates they support. But I think it goes further than that. In a Democratic Party increasingly dominated by insurgent progressives, authenticity (or the perception thereof) is a politician’s most valuable asset. The approval of “mainstream” establishment entities has become a curse. The imprimatur of an officialdom widely seen as hopelessly corrupt dilutes a candidate’s reputation for authenticity, independence and the voters’ belief that he or she will stand up for we the people over the powers that be.

Much to the frustration of ruling elites, Bernie Sanders keeps gaining support despite repeated attempts to sandbag him. It began, of course, with a well-documented campaign by the Democratic National Committee to cheat Sanders out of a fair shot at the nomination in 2016. Though less brazen, the sympathies of the DNC, still dominated by Hillary Clinton allies, remain evident in the current cycle. As in 2016, Democratic-aligned media outlets rarely mention Sanders other than to frame him as an elderly fringe wacko. The “Bernie Blackout,” featuring graphics of TV polls where Sanders’ name had been excised, became so ridiculously obvious that it got its own Reddit.

The last few weeks have been especially instructive. There was the infamous sandbagging of Bernie Sanders at the hands of a CNN moderator. “Have you stopped beating your wife?” became, seconds after Sanders issued a categorical denial, “why did you tell Elizabeth Warren that you did not believe that a woman could win the election?,” a statement that wouldn’t be sexist if he said it and that runs counter to everything he has said and done over the last 40 years.

Next came the bizarre New York Times two-fer endorsement of Warren and Klobuchar, which included the demonstrably false claims that Bernie Sanders is hard to work with in the Senate and refuses to compromise. This was quickly followed by the news that Hillary Clinton, the nation’s least popular political figure, told a Hulu documentarian that “nobody likes” Sanders, the most popular, and that he’s a “career politician.” As opposed to herself and her husband?

In the bubble-wrapped imaginations of ruling elites like Clinton and the editors of the New York Times, the hoi polloi care deeply about what they say and think. They think we take their lead.

Reality is quite opposite.

It’s not that we don’t listen. We do. We pay attention to what Those In Charge say and what they want us to do—so that we can do the exact opposite.

Contempt for our “leaders” is one of the key reasons Donald Trump won the presidency. “To the extent that people are using Trump as a way of venting about their general unhappiness, trust is irrelevant,” Stanford University political scientist Morris Fiorina observed during the summer of 2016. “They’re just trying to send a message that they’re tired of being taken for granted and screwed by both sides.”

People wanted to send another message, albeit a childish one, to the elites: we hate you. 14% of Americans have a “great deal” of confidence in the news media. Congress’ approval rating is 27%. Last time Gallup bothered to check, Hillary was at 38%.

Americans’ disdain for their masters was placed in sharp relief by polls that showed that many Trump voters would have voted for Bernie Sanders had he been the Democratic nominee and that one out of ten Bernie Sanders’ primary supporters ended up voting for Donald Trump in the general election. Trump and Sanders were the change candidates in a change year. And 2020 is even changier.

Many on the left, me included, have held doubts about Bernie Sanders. We worry that he isn’t far left enough, especially on foreign policy. After all, he’s OK with drone assassinations, was pretty much silent about the Israeli invasion of Gaza, praised the illegal assassination of Osama bin Laden that denied justice to 9/11 victims, and has not proposed specific numbers by which he would cut the Pentagon budget.

Even on domestic issues, Sanders’ forte, he is weaker than we would like. The $15-an-hour minimum wage he is pushing for now would have been OK when he started working on it years ago, but due to inflation $20 or $25 an hour would make more sense now. By global standards, Sanders is no radical. He’s a garden-variety liberal—the Democratic Party under FDR.

Fortunately for him, reactionary goons like the New York Times remind us that whatever his shortcomings Sanders is still the best game in this very right-wing town, the farthest left Democrat to have presented himself for our consideration in the last 40 years.

If Hillary Clinton and CNN and MSNBC hate Bernie so much, maybe he’s all right.

It is increasingly likely that Bernie Sanders will become the Democratic nominee and perhaps President of the United States. If and when that happens, when this “democratic socialist” takes the oath of office, he ought to give a shout-out to the clueless enemies who made his victory possible.