The Media Is down in the Gutter with Trump 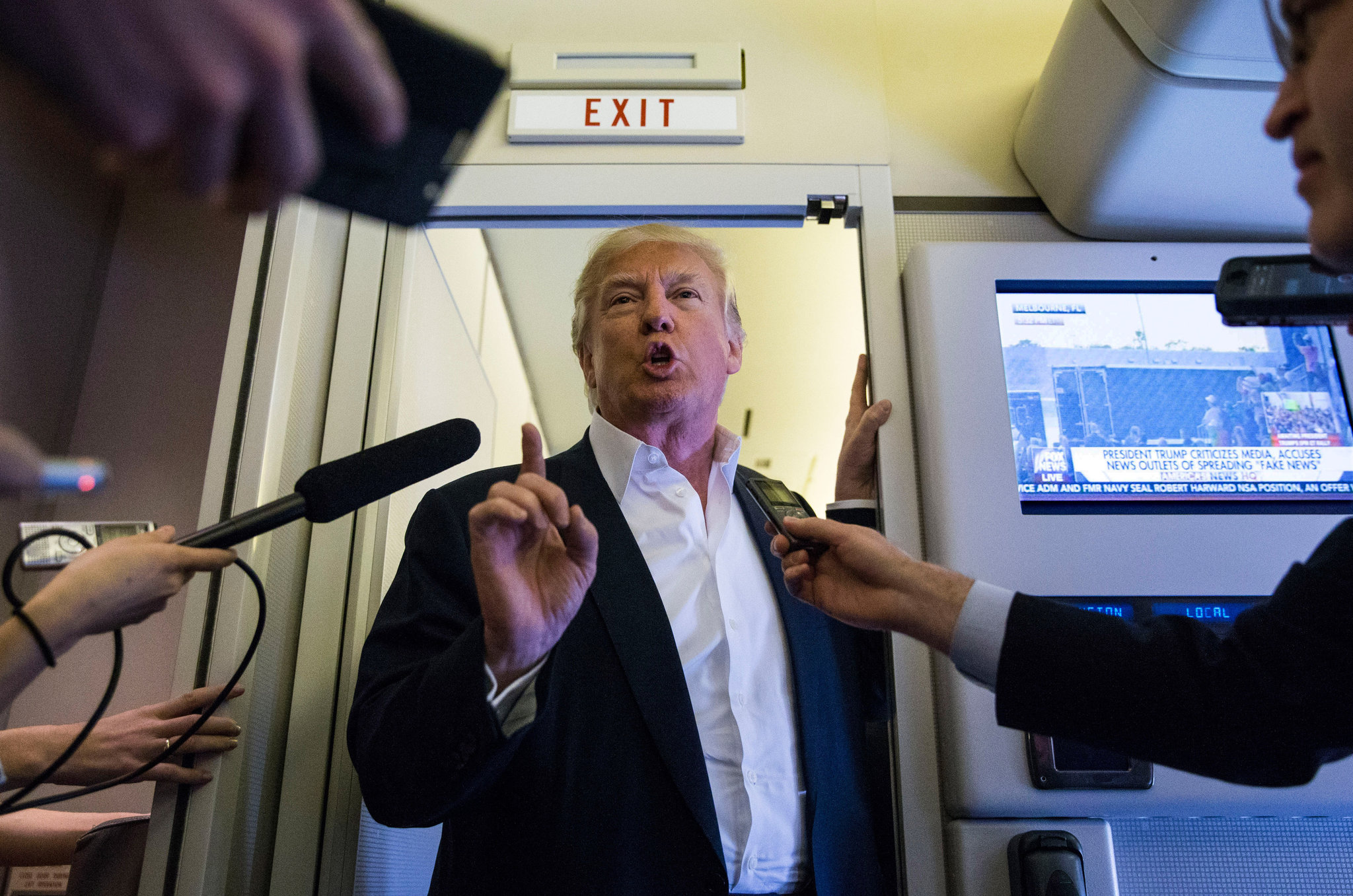 How you respond to an attack defines you. Keep your cool, remain civil and others will respect the way you handle yourself, even if they disagree with you. Lower yourself to your assailant’s level and—at best—spectators will dismiss your dispute as a he-said-she-said between two jerks.

So much has been written about Donald Trump’s debasement of rhetorical norms and his gleeful contempt for truth that there is no need to cite examples or quote studies that count the prolificacy of his lies. Trump’s attacks on journalists—“fake news,” mocking a disabled reporter’s body movements—are contemptible. They undermine citizens’ trust in news media, a serious menace to democracy and civil society.

Less noticed is how major news organizations, incensed by the president’s trolling, have debased themselves to Trump’s moral level.

American journalism used to adhere to strict standards. Though impossible to achieve, objectivity was paramount. At bare minimum, reporters were expected to project an appearance of political neutrality.

Truth only derived from facts—verifiable facts. Not conjecture and never wishful thinking. Sources who wanted to be quoted had to go on the record. Anonymous sources could flesh out background but could not be the entire basis for a story.

From the start of Trump’s run for president—before the start—Democratic-leaning media outlets abandoned their own long-cherished standards to declare war on him. Every day during the 2016 campaign The New York Times led its coverage with its forecast of Hillary Clinton’s supposed odds of defeating Trump. Setting aside the fact of the Times’ embarrassing wrongness—the day before Election Day they gave Clinton an 85% chance of winning—it cited odds rather than polls. Maximizing a sense of Clintonian inevitability was intended to demoralize Republicans so they wouldn’t turn out to vote. The two figures might suggest the same thing. But 85-15 odds look worse than a 51-49 poll.

It’s downright truthy. And when truthiness goes sideways it makes you look really, really dumb. 51-49 could go either way. 85-15, not so much.

The impeachment battle marks a new low in partisanship among media outlets.

After Trump’s surprise-to-those-who’d-never-been-to-the-Rust-Belt win, outlets like the Times declared themselves members of a so-called “Resistance.” Opinion columnists like Charles M. Blow pledged never to “normalize” Trumpism; what this has meant, ironically, is that Blow’s essays amount to rote recitations on the same topic: normally, about the argument that Trump sucks. Which he does. There are, however, other issues to write about, such as the fact that we are all doomed. It would be nice to hear Blow’s opinions about taxes, militarism and abortion.

Next came years—years!—of Robert Muellerpalooza. Russia, corporate media outlets said repeatedly, had “meddled” in the 2016 election. Vladimir Putin installed Trump; Hillary Clinton’s snubbing of her party’s 72%-progressive base had nothing to do with the loss of the most qualified person blah blah blah to an inductee in the WWE Hall of Fame.

Whatever happened to the journalistic chestnut: if your mother says she loves you, check it out? Russiagate wasn’t a news report. It was religious faith. Russia fixed the election because we, the media, say so, we say so because we were told to say so by politicians, who were told to say so by CIA people, whose job is to lie and keep secrets. No one checked out anything.

What we knew and still know is that a Russia-based troll farm spent either $100,000 or $200,000 on Facebook ads to generate clickbait. Most of those ads were apolitical. Many were pro-Clinton. The company has no ties to the Russian government. It was a $6.8 billion election; $200,000 couldn’t have and didn’t move the needle.

Anonymous Congressional sources told reporters that anonymous intelligence agents told them that there was more. The Mueller Report implies as much. But no one went on the record. No original or verifiable copies of documentary evidence has been leaked. The report’s numerous citations are devoid of supporting material. By pre-Trump journalistic standards Russiagate wasn’t a story any experienced editor would print.

It was barely an idea for a story.

Speaking of impeachment, mainstream media gatekeepers are so eager to see Trump removed from office that they’re violating another cardinal rule of journalism: if it’s news, print it. The identity of the CIA “whistleblower” (scare quotes because actual whistleblowers reveal truths that hurt their bosses) who triggered impeachment over Trump’s menacing phone call to the president of Ukraine has been known in Washington, and elsewhere if you know where to look, for months.

Federal law prohibits the government from revealing his identity, and rightly so. But it has leaked. It’s out. It’s news. Nothing in the law or journalistic custom prevents a media organization from publishing it. News outlets felt no compulsion to similarly protect the identity of Chelsea Manning or Edward Snowden. So why aren’t newspapers and broadcast networks talking about it?

“I’m not convinced his identity is important at this point, or at least important enough to put him at any risk, or to unmask someone who doesn’t want to be identified,” New York Times editor Dean Baquet said. So much for the people’s right to know. Why should subscribers buy a newspaper that doesn’t print the news?

There is a because-Trump change in media ethics that I welcome. What’s suspect is the timing.

Trump is the first president to get called out for his lies right in the news section. Great! Imagine how many lives could have been saved by a headline like “Bush Repeats Debunked Falsehood That Iraq Has WMDs.” A headline like “Slurring Sanders’ Numerous Female Supporters as ‘Bros,’ Hillary Clinton Lies About Medicare-for-All” could have nominated and elected Bernie and saved many Americans from medical bankruptcy.

But all presidents lie. Why pick on Trump? His lies are (perhaps) more numerous. But they’re no bigger than his predecessors (see Iraq WMDs, above). Yet discussion of former presidents remains respectful and slavish as ever.

I say, give coverage of Obama and other ex-presidents the same tone and treatment as the current occupant of the White House gets from the news media:

“Jimmy Carter, First Democratic President to Not Even Bother to Propose an Anti-Poverty Program, Dead at TK”