The First Thing We Do, Let’s Fire All the Cops 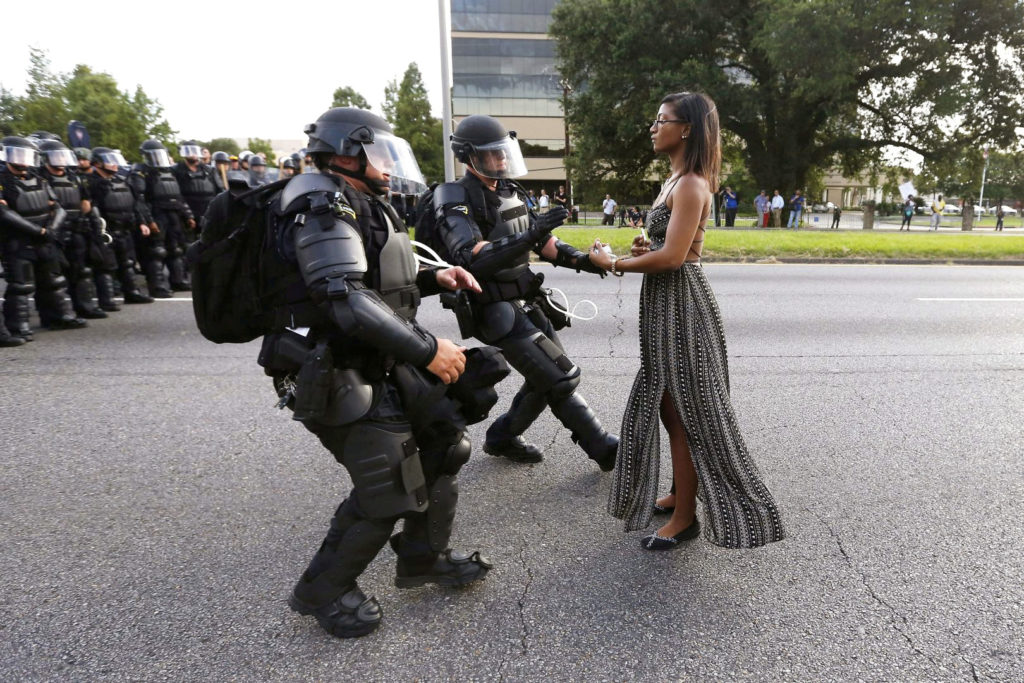 In the latest shooting of an innocent civilian by a trigger-happy police officer, a white Fort Worth cop blew away a 28-year-old African-American woman through her bedroom window as she played a video game with her eight-year-old nephew. Atatiana Jefferson’s neighbor had called a nonemergency police number to request that they check on her because her doors were wide open.

“The officer did not announce that he was a police officer prior to shooting,” a spokesman said. Instead, he shouted through the window before killing Jefferson: “Put your hands up! Show me your hands!”

This atrocity followed the recent conviction of a white officer in Dallas who claimed that she had entered the wrong apartment in her building before mistakenly shooting an African-American man. Botham Jean, 26, was eating ice cream in his own home, clearly not hers, when he was killed.

Police shot and killed 689 people so far this year in the U.S. Blacks are 2.5 times more likely to be shot to death by police officers than whites. Many victims were unarmed.

Is it any surprise that only half of the public has confidence in Officer Not So Friendly? Public perception is worse among minorities and young people.

It’s not a major political campaign issue but it ought to be: domestic policing in the United States needs to be reinvented from the ground up.

“From their earliest days in the [police] academy, would-be officers are told that their prime objective, the proverbial ‘first rule of law enforcement,’ is to go home at the end of every shift,” Seth Stoughton noted in the Harvard Law Review. Policing experts call this me-first approach the Warrior mentality. “Officers learn to treat every individual they interact with as an armed threat and every situation as a deadly force encounter in the making.”

In the real world, America’s streets are not a war zone. 95% of police officers go through their entire career without ever having to fire their weapon. But many cops are military veterans—and vets are 23% more likely than non-vets to draw and shoot.

Increasingly concerned about police shootings and the eroding of trust between cops and the people, some leaders are trying to promote a Guardian mentality instead. “The Guardian mindset prioritizes service over crime-fighting, and it values the dynamics of short-term encounters as a way to create long-term relationships,” writes Stoughton. “As a result, it instructs officers that their interactions with community members must be more than legally justified, they must also be empowering, fair, respectful, and considerate. The Guardian mindset emphasizes communication over commands, cooperation over compliance, and legitimacy over authority.”

The priority for cops shouldn’t be that they get to go home at the end of every shift. They should make sure that the people they interact with are safe.

This is common sense. It’s also an uphill battle.

The militarization of domestic civilian policing is no longer a concern about a phenomenon in development. It is here. Police departments throughout the United States have acquired tanks, armored personnel carriers, automatic weapons and other military hardware transferred from the wars in Afghanistan and Iraq. SWAT teams, which originated in the military-style LAPD, are everywhere. Even little towns like Mt. Orab, Ohio (pop. 2,701) and Middleburg, Pennsylvania (pop. 1,363) have a SWAT outfit ready to take on bands of heavily-armed goons in case a 1980s action movie inexplicably comes to life there.

For Americans of a certain age, cops no longer dress or look like cops. The police carry stun grenades and semiautomatic pistols and rifles and wear Kevlar vests. They’re bulked up, obviously on steroids and certainly no stranger to the weight room. Their hair is cropped short, military style. They’re scary and they mean to be.

There’s a reason they look like that. One out of five police officers is a military veteran. Police brass love vets. So even cops recruited from the civilian population learn to emulate that military look and swagger.

Federal programs encourage and even mandate preferential treatment of vets by police departments when looking for recruits. But this is exactly the wrong direction. Trained to have an authoritarian approach to interactions with civilians and frequently the victims of PTSD, veterans who become policemen are more likely to resort to force, less interested in deescalation and more likely to mentally deteriorate and even to commit suicide while on duty.

As of this writing this story is still developing, but I would not be surprised to learn that the 35-year-old officer involved in the Fort Worth shooting was a vet.

Police officers have the power of life and death over us. They have discretion to harm us through less dramatic interactions like issuing us traffic infractions that can cost us thousands of dollars. The potential for abuse or poor judgment requires that police officers be selected from among those members of our society who are least interested in pushing around their fellow citizens. Aggressiveness should be considered a negative quality in police recruiting.

As with any position in which the holder is vested with power, the paradox is that those who most want the job are those who should least be permitted to hold it. It should almost be a reverse draft: the less you want to be a cop, the better qualified you are for the job.

I would fire every single police officer in the United States and suggest that if they want to come back they reapply for their positions under completely different guidelines. I would take away guns from most policemen – they simply don’t need them – and replace semiautomatic pistols with traditional revolvers as the standard sidearm. No more military gear, no more bulletproof vests. Return the tanks to the Pentagon. And I would put an end to recruiting from the military.