Progressives to Democrats: We Are Watching the Way You Mistreat “the Squad” 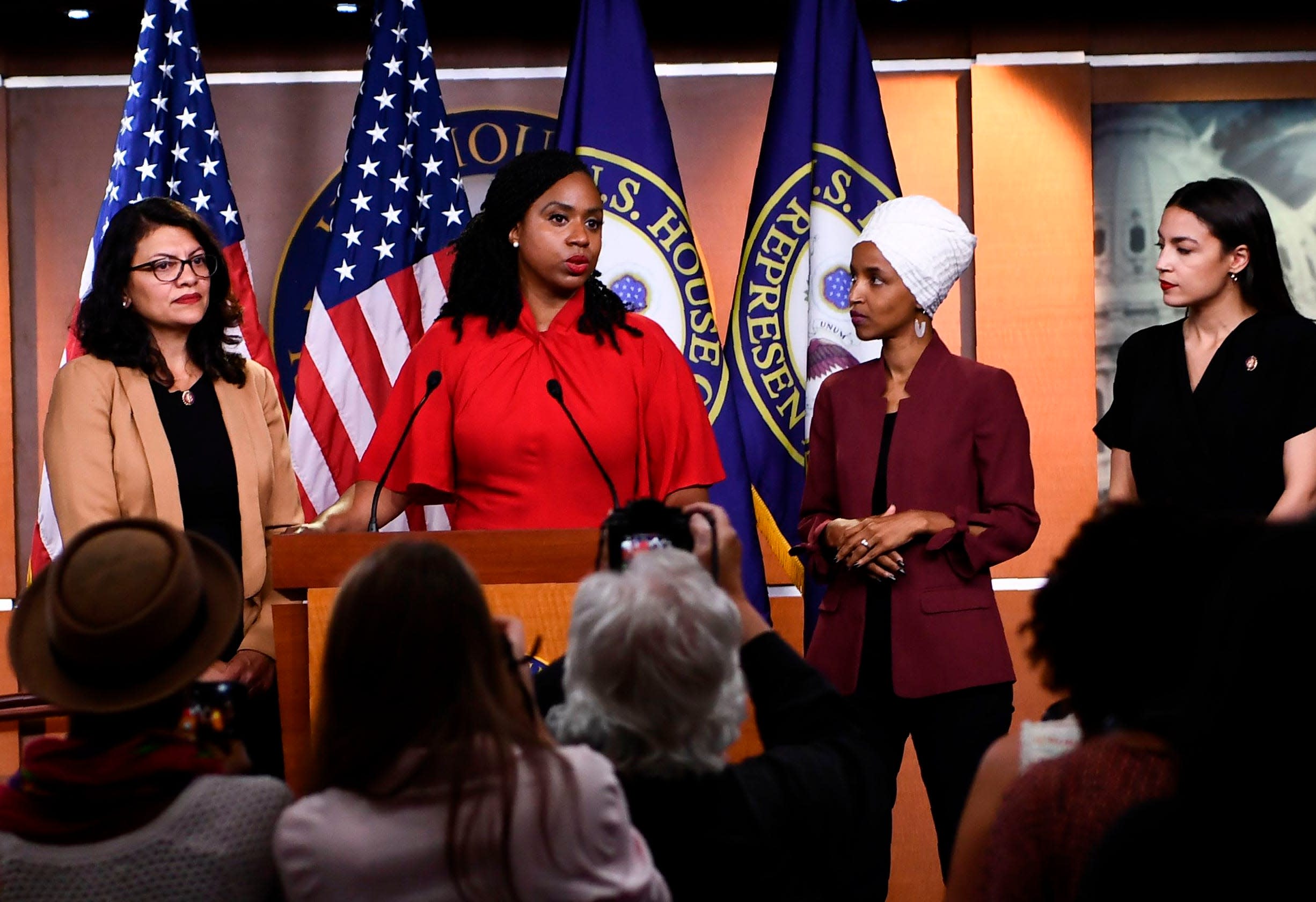 Strictly speaking, Nancy Pelosi is right. Led by Alexandria Ocasio-Cortez of New York, the four Congressional freshmen known as the Squad are, by Beltway standards, relatively powerless—just four votes, as the speaker said. They chair no committees and head no broad coalitions that can be counted upon to cast yeas and nays at their command. Yet they are important—and not merely due to their formidable social media following.

Building on Bernie Sanders’ outsider progressive legacy in the Senate and his two surprisingly successful presidential campaigns AOC, Ilhan Omar, Ayanna Pressley and Rashida Tlaib are a symbol of the progressive challenge to a Democratic Party still controlled by Third Way/DLC/Clintonista/Rahm Emanuel corporatist right-wingers despite the fact that 72% of its voters are self-identified progressives.

Progressive voters are watching. Is there room for them inside the Democratic Party? The signs are hardly encouraging.

Left populist Democrats are still seething with disgust from 2016 when a DNC then chaired by Clinton hack Debbie Wasserman Schultz stacked superdelegates in favor of Clinton against Sanders, was accused of laundering money for the Clinton campaign, “forgot” to send party officials to count delegates and caucus goers in pro-Sanders counties and quashed pro-Sanders delegates’ speeches at the national convention.

During the fall campaign right-wing Democrats let progressives know in no uncertain terms that they didn’t need or want their support. Hillary Clinton announced a pivot from right to righter to appeal to anti-Trump Republicans. (There weren’t many of those.) She never considered Bernie for vice president or a cabinet position.

No one likes to be where they’re not wanted. So many progressives stayed home on election day that Trump won.

Rather than accept responsibility for their losing strategy, however, DNC corporatists blamed the progressives they’d treated like crap. Two months after Trump took office, they installed one of their own, Tom Perez, as DNC chairman. “Leading Democrats think Bernie Sanders’s wing of the party will come back into the fold — even without their choice of DNC chair,” Jeff Stein wrote in Vox.

Democrats won the 2018 midterms, taking back the House. The Squad rode that wave. These young women were young, unabashedly left, exciting. How would the establishment treat them?

Pelosi should have expressed her annoyance at the Squad’s votes against a border patrol funding bill—imagine the audacity, they wanted increased protection of children and families—privately. Instead, like an idiot, she vented to Maureen Dowd of The New York Times that the Squad was impotent aside from “their public whatever and their Twitter world.” An ever-opportunistic President Trump leapt into the intraparty fray with a troll tweet pretending to defend Pelosi and calling for the Squad to be deported to, in the case of the three members who were born in the U.S….where? No one, Trump least of all, knows.

Eager to slap a Band-Aid on her deeply divided party, Pelosi engineered the passage of a toothless resolution to censure Trump’s racist remarks. As I said last week in The Wall Street Journal, it was too little too late. “It’s [now] possible,” I wrote, “to imagine a not-so-distant future in which progressive voters leave the Democrats to form a new party—or stop voting entirely.”

A series of tweets by CNN’s Jake Tapper revealed that the moderates still don’t get it. “House Democrats appeared unified in their votes this week but I’ve spent the day talking to a bunch of them and many are extremely frustrated,” Tapper said. “Other House Democrats are conflicted about having to defend the Squad given things they’ve said and done. House Dems cited: talk of supporting challengers to incumbent Dems in primaries, AOC’s use of the term ‘concentration camps,’ anti-Semitic comments by Tlaib & Omar.” (According to dictionaries, AOC is right. Neither Tlaib nor Omar are on record saying anything anti-Semitic.)

Tapper continued: “Others noted that this week the House Democratic Caucus stood by a group that is not perceived as standing by them…We were there for them; they should stop attacking us.”

Only in the vacuum-packed chambers of our do-nothing Congress does a consequence-free resolution pass as being “there for them.” Pelosi, Schumer and other Democratic leaders should have notified Trump that he must resign at once, that there would be no more business of any kind, including budgetary, passed in Washington until he leaves office. Repeatedly demanding that House members be “sent back” “where they came from” is intolerable—yet centrist Democrats continue to tolerate it.

Human beings are social animals. We feel comfortable when we feel welcomed and run away when we’re greeted with indifference or disdain. I remember joining Mensa at age 12. I was excited to attend my first meeting. But when I walked in, it was a cocktail party. Everyone was old. No one talked to me so I left and never went back. We were all smart but that wasn’t enough to make me want to hang out.

Progressives and liberals may both hate Trump but that doesn’t make them political allies. As even right-wing Democratic Times columnist remarked: “It is simply a fact that leftists, as well as the generally disaffected, need to be courted just as moderates do.” But the establishment right-wingers in charge of the Democratic Party are not only not courting leftists, they keep actively snubbing and insulting them. They’ve even renewed the last election cycle’s “Stop Sanders” propaganda campaign. Stopping progressives Bernie Sanders and Elizabeth Warren appears to be the raison d’être of Joe Biden’s last-second candidacy.

Democrats’ dismissive and condescending treatment of the Squad sends a clear signal to progressives: We don’t like you. Go away.