It’s Up to Nancy Pelosi to Cave In 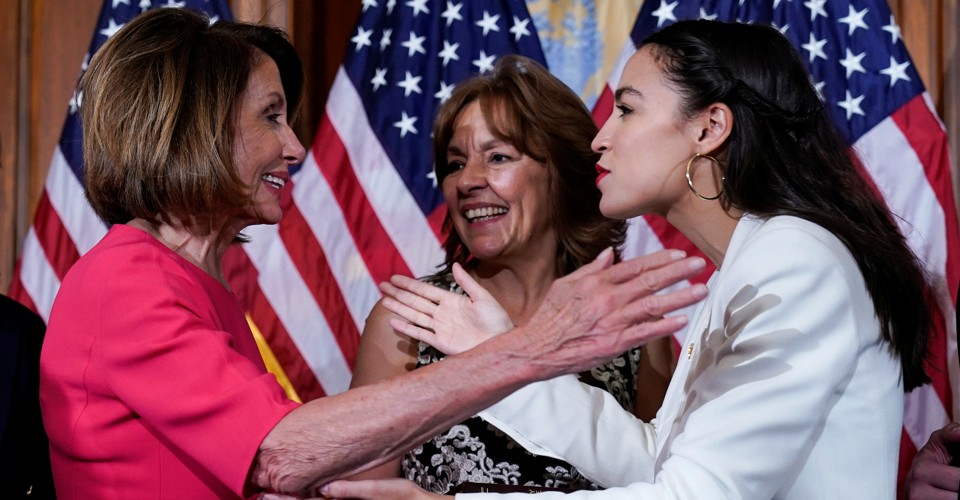 How should the Democratic Party resolve its civil conflict between progressives and centrists? Society has a simple rule. When an argument gets out of control, it’s up to the side with the most money, power and social standing to extend an olive branch. Even when kids are wrong, parents must make nice first.

In the workplace, a good boss knows that smoothing her employee’s ruffled feathers is her responsibility.

The same is true about international diplomacy. When a dispute between two nations becomes a crisis there’s a stronger chance of keeping the peace when the bigger, stronger, richer country makes the first concession. (The United States doesn’t see things this way, which leads to many unnecessary wars.)

The vast majority of Democratic voters are self-identified progressives. Left populist progressives like “the Squad”—House Representatives Alexandria Ocasio-Cortez of New York, Ilhan Omar of Minnesota, Ayanna Pressley of Massachusetts and Rashida Tlaib of Michigan—have millions of followers on social media, providing them with outsized influence beyond their status as incoming freshmen.

Yet the party apparatus remains under the control of the same center-right corporatist clique that took over in the 1970s. The DNC is chaired by Tom Perez, a moderate aligned with the Clintons, Rahm Emanuel, Nancy Pelosi and Chuck Schumer. They control party pursestrings, ballot access, debate invitations and the imprimatur of legitimacy in the media outlets they control, like The New York Times, NPR and MSNBC.

It’s easy to see why establishment Democratic leaders like Pelosi are irritated by upstarts like AOC and “their public whatever and their Twitter world,” as she recently sniped. But Pelosi is 79 years old to AOC’s 29. She’s worth $30 million; AOC has zero savings. As Speaker of the House she has sat in the room watching President Obama blow up people with drone missiles. AOC was tending bar.

Nancy Pelosi is a big girl. And she should act like one.

She should be mending the rift within her party. She should not be picking fights with someone young enough to be her granddaughter. It makes her look small. And it alienates progressive voters. When 72% of your party’s voters are progressives and you’re not progressive yourself, you have to step gingerly if you want to avoid a revolt that topples you from power. If she wants to preserve her and her center-right faction’s control of the party, Pelosi should make amends with AOC’s Squad in word and in deed.

Episodes from opposite sides of the electoral-political spectrum illustrate the foolishness of the Pelosi Democrats’ broadsides against insurgent progressives.

California and national Republicans had been wary of Arnold Schwarzenegger when he entered the wild gubernatorial campaign that followed the 2003 recall of California governor Gray Davis. GOP leaders thought he was too moderate. But Schwarzenegger climbed in the polls, party bosses embraced him and he won.

Faced with rising political stars within their party of whom they initially disapproved, Republican gatekeepers have been remarkably nimble at pivoting to adjust to the popular will expressed by their voters. They wanted Jeb! Bush in 2014 and 2015 but were happy to join the formerly dreaded Team Trump by 2016.

Faced with populist challenges, Democratic bosses stubbornly defend their preselected moderates against populist challenges from the left: Jimmy Carter against Ted Kennedy in 1980, John Kerry against Howard Dean in 2004, Hillary Clinton against Bernie Sanders in 2016. They’re repeating the pattern now with Joe Biden.

Center-right Democrats give progressives no quarter. They’re like Genghis Khan’s army, slaughtering with abandon, salting the fields, nothing left behind.

Hillary embodied this take-no-prisoners approach. After defeating Sanders—by repeatedly, overtly cheating—she offered no quarter. No offer of a veep spot. Even though they were popular with voters she wanted none of his ideas. She refused to hire Sanders’ campaign workers.

It mostly went unnoticed but Obama did the same thing, ignoring the progressive surge of John Edwards’ “two Americas” campaign during the 2008 primaries. Obama’s cabinet didn’t include a single liberal.

Dean and his supporters similarly found themselves left out in the cold after Kerry secured the 2004 nomination.

Considering the fact that snubbing the progressive base rarely works out for Democrats—it failed in 1980, 1984, 1988, 2000, 2004 and 2016—you’d think DNC insiders would rethink their strategy. It’s pretty clear that they would rather lose as a center-right party than win as a center-left one.