Media Censors the Opinions of 37% of Americans. And Now They’re Gloating About It. 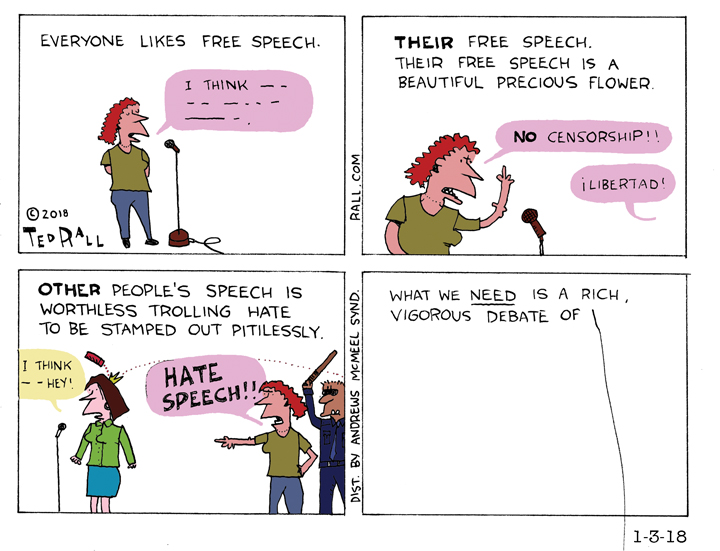 Thirty-seven percent of American citizens are socialist or communist. That’s far more people than voted for either Hillary Clinton (28% of eligible voters) or Donald Trump (27%) in 2016.

The majority is voiceless. A privileged minority rules. The United States is a political apartheid state.

If the Left were allowed on the ballot in this fake democracy, given space in newspapers and on television, invited to join political debates, and if it wasn’t brutally suppressed by the police and FBI, the Left wouldn’t need to wage a revolution in order to take over the country. Leftists could easily win at the ballot box if America were a real democracy.

Media censorship plays a major part in the conspiracy to deny the majority Left its rightful role as the nation’s rulers. Socialist and communist Americans read newspaper editorial pages and draw the false conclusion that they’re members of a lunatic fringe. More than 1,000 papers—yet not one single leftist opinion columnist or editorial cartoonist on staff?!?

Leftist Americans exist by the millions but many are isolated from one another. They watch CNN, MSNBC and FoxNews and figure they’re all alone. None of the three major cable news networks employs a single left-wing commentator. They go to the polls but there’s no left party on the ballot. Or if there is, they’ve never heard of it and don’t want to waste their votes.

To be a Leftist in America today is analogous to how black people felt until recently while watching TV: you don’t see anyone like you. The powers that be want you to feel like the Invisible Man, as though you didn’t exist. You know you exist. But you can’t miss the system’s message that you don’t matter.

American politics is a party to which you have not been invited.

This has been the state of affairs for as long as I can remember. Even as more Americans become disgusted by runaway capitalism, censorship of the Left has become increasingly thorough and ferocious.

There used to be a little space. In the 1990s lefties like me were granted occasional mentions in The New York Times, Washington Post, CNN and NPR. Even FoxNews had us on to serve as punching bags. Shortly after 9/11 we disappeared along with the Twin Towers, relegated to a few blogs and alternative weeklies. Now newspapers and cable TV news and corporate news websites never give space or air to representatives of the Left. (Don’t email me about AOC. She’s a Democrat, not a leftist.)

Censorship of the really-existing Left is impressively thorough. You’ll find exactly as much opposition to the government on the media here in the U.S. as you’ll find in North Korea.

Ashamed and afraid, the gatekeepers used to have the decency to keep secret their suppression of people whose political sin is that they really, truly believe that all humans are equal. They didn’t even think they were biased. They thought they were reasonable. Moderate. Middle of the road.

Censorship with a smile is no longer enough for America’s corrupt news media. Now they’re brazenly contemptuous. The bastards even seek to elevate censorship of the Left to a proud American value!

On May 12th the Times ran another in a string of hit pieces on RT America, a television network it described as “the cat’s paw of Russia’s president, Vladimir Putin.” RT, the Times complained, “amplifies voices of dissent, to sow discord and widen social divides. It gives the marginal a megaphone and traffics in false equivalence.” Imagine that: giving airtime to people we’ve always censored! “Voices of dissent” must never be “amplified.” They must be silenced.

This has become a standard talking point.

The formerly-liberal Guardian has gotten into the act: “Fringe opinion takes centre stage [on RT],” it wrote in 2017. “Reporting is routinely bolstered by testimony from experts you have never heard of, representing institutions you have never heard of.” It is true that RT rarely interviews “experts” like John Bolton and William Kristol, neocon architects of the Iraq War who despite their evil idiocy pop up everywhere from CNN to the Bill Maher show. Far more often, they interview people who have been right year after year about issue after issue—people like me.

I get interviewed by RT often. (Disclosure: I am a frequent guest on RT’s sister radio network Sputnik News and draw cartoons for them too.) Never once have they told me what to say or not say. I wish I could say the same about many “mainstream” U.S. media outlets.

Many attacks against RT originate with the U.S. government’s national security apparatus. The Times piece blithely cites the RAND Corporation, Molly McKew, a right-wing lobbyist for the anti-Russian government of Georgia, and the Director of National Intelligence to support its allegations. A 2017 report issued by the DNI groused: “RT’s reports often characterize the United States as a ‘surveillance state’ and allege widespread infringements of civil liberties, police brutality, and drone use. RT has also focused on criticism of the U.S. economic system, U.S. currency policy, alleged Wall Street greed, and the U.S. national debt.”

Notably, the report did not question the accuracy of those assertions.

It certainly didn’t suggest that the U.S. stop doing all those things that make it look so awful.

To U.S. corporate propagandists the solution is clear: censor more and censor better.