I Told You So: Only Idiots Believed in Russiagate 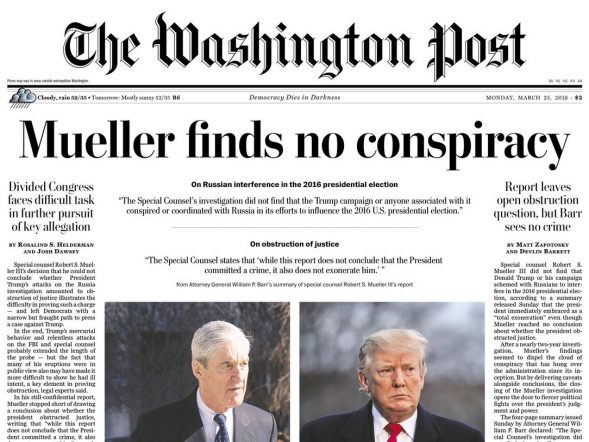 There they go again.

In 2002 and 2003 corporate media idiots speculated that secular socialist Saddam Hussein might give nukes that he didn’t and couldn’t have to radical Islamists who wanted to kill him. That story wasn’t true. Worse than that, it couldn’t have been true. I said it over and over and over. So did others.

But we skeptics were outsiders. Corporate media’s strict idiots-only hiring policy keeps journalists-as-stenographers, propagandists and broken-brain logic-haters employed by censoring those of us who are always right. The idiots’ idiotic lies about WMDs justified a war that left more than a million Iraqis dead.

Corporate media didn’t fire their idiots after the WMD fiasco. Why would they? They were in the war business and the suck-up-to-government business. Had they been in the truth business, losing their credibility might have mattered.

Idiots gonna idiot. So it’s no surprise that in 2016 the same corporate media morons fabricated another conspiracy theory so outlandish that not only was it obviously untrue, it could not possibly have been true—and that it would again have devastating real-world consequences.

Russiagate was a propaganda campaign waged by the Democratic Party and its media allies with a daily blizzard of overheated speculation that Russia installed Donald Trump as its stooge by hacking the 2016 presidential election. Several years and millions of dollars later, special counsel Robert Mueller has concluded that it didn’t happen.

Of course it didn’t happen. It couldn’t have happened.

As I wrote last year: “You’re asking us to believe that Trump’s people met with Putin’s people, not to discuss Trump’s sleazy real estate developments in the former Soviet Union, but to encourage Russian hackers to break into the DNC, steal Hillary’s emails and funnel them to WikiLeaks with a view toward angering enough voters to change the outcome of the election in Trump’s favor. Trump doesn’t even read one-page memos. Yet we’re being asked to believe that he supervised a ridiculously complex Machiavellian conspiracy?

“WikiLeaks didn’t get the DNC documents from Russia or any other state actor. They got them from a disgruntled pro-Bernie Sanders staffer at the DNC. Anyway, the intelligence community — you know, the friendly folks at the CIA, FBI and NSA whom Democrats worship the way Republicans revered firefighters after 9/11 — says whatever Russian hacking occurred did not affect the outcome of the election.

“Then there’s this: Trump didn’t actually want to win. Why would he go to such lengths to steal something he didn’t want?”

As Chris Christie pointed out January 28th, how the hell could a shoestring operation like the Trump campaign, which was “just trying to figure out how to get field people hired in places like Pennsylvania” be so internationally sophisticated as to “run some sort of Tom Clancy operation”?

My colleague Matt Taibbi writes, and he’s right: “Nobody wants to hear this, but news that Special Prosecutor Robert Mueller is headed home without issuing new charges is a death-blow for the reputation of the American news media.” Whatever credibility U.S. media still had after pimping those imaginary Iraqi WMDs, The Los Angeles Times allowing its stock to be sold to the LAPD and then taking orders from the police, and “experts” repeatedly reporting that Donald Trump had no chance of winning, lies in tatters.

The media idiots’ WMD BS cost a million-plus Iraqis their lives. Their Russiagate crap has vastly increased the chances that Trump will win reelection. Russiagate will make it all but impossible to impeach the bastard as he deserves and as the country desperately needs.

As I said on the radio after the Mueller news broke: “Business corruption would have been, should have been the focus of Democrats looking for legal means to remove this president. That’s the low-hanging fruit; that’s where something actually happened. Instead, they went after the president for something he didn’t actually do, and so they look really foolish, and Trump is going to beat the Mueller report over the heads of the Democrats all through next year, and it’s going to be hard for the Democrats to put this behind them.”

Trump is a corrupt real estate magnate with ties to the mafia and sleazy autocrats around the world. Anyone out to get him should have started by following his misbegotten money. Instead Democrats tried to do three things at once: get Trump, destroy U.S.-Russia relations to provoke a new Cold War that would profit the military-industrial complex and explain away the bankruptcy of Hillary Clinton’s brand of centrist corporatism.

Democrats are now turning their attention to the New York-based investigations of Trump and his business affairs by U.S. Attorneys. The president faces significant legal jeopardy on several fronts, including abusing a charitable organization to evade taxes and the likelihood that his hush-money payoffs to Stormy Daniels violated federal campaign finance laws. When he leaves office, Trump might even face jail time.

But none of that matters. Trump is so old and fat he’ll probably die before facing prosecution. The real threat to Trump from New York is current and political. Thanks to Mueller’s exoneration on Russiagate, Trump is largely politically inoculated from the New York stuff even if the Department of Justice files major charges. “Just another witch hunt,” he’ll say—and voters—not just his base—will nod their heads. The media will go on and on about wrongdoing that under normal circumstances would amount to one hell of a scandal—but who will listen other than partisan Democrats?

The second Trump Administration that just became likelier will hasten the destruction of the planet by pollution and climate change, widen income and wealth disparity and gut the Affordable Care Act. The U.S. system may never recover. All because the corporate media idiots went after a serial criminal for the one crime he didn’t commit.

Wanna know the richest irony? Trump knew how this would turn out. He knew what the Mueller Report would say. For two years he’s been watching DNC mouthpieces like MSNBC’s Rachel Maddow rant about Russiagate. He knew he’d use those clips for one attack ad after another.

Actual collusion! Democrats and their media outlets conspired to install Donald Trump as president in 2020.