SYNDICATED COLUMN: Why Do the Democrats Take Trump’s Trolling Lying Down? 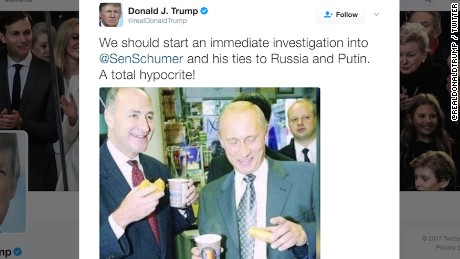 This is advice for the Democrats. Democrats never take my advice. So why do I keep giving it to them?

These “what Democrats ought to do” columns aren’t really for the Democratic Party leadership. They’re for you, dear left-of-center reader. I’m explaining what the Dems should be doing and comparing it to what they’re actually doing. That gap between what makes sense and what is going on, I hope you’ll conclude, is so big that we should declare the Democratic Party dead and gone. Giving up on the Dems is important.

The Left will never roll up its sleeves and start building a genuine alternative to the current system until it stops trying, somehow, to take over or sway the Distracticats.

This week, I’d like to showcase the stunning ineptitude of the Democrats’ communications strategy.

There are many examples to choose from, but lately I have been marveling at Democratic leaders’ wimpiness in the face of the president’s Twitter-trolling.

On November 28, 2017, Trump tweeted: “Meeting with ‘Chuck and Nancy’ today about keeping government open and working. Problem is they want illegal immigrants flooding into our Country unchecked, are weak on Crime and want to substantially RAISE Taxes. I don’t see a deal!”

Senate Minority Leader Chuck Schumer and House Democratic Leader Nancy Pelosi canceled their scheduled meeting with Trump. “Given that the President doesn’t see a deal between Democrats and the White House, we believe the best path forward is to continue negotiating with our Republican counterparts in Congress instead,” Pelosi and Schumer said in a joint statement. “Rather than going to the White House for a show meeting that won’t result in an agreement, we’ve asked (Senate Majority Leader Mitch) McConnell and (House Speaker Paul) Ryan to meet this afternoon.”

Schumer and Pelosi were right to cancel — but not because of Trump’s stated pessimism about arriving at an agreement. They should have canceled because Trump insulted them. “Chuck and Nancy”? Really?

As Frederick Douglass said, people naturally have contempt for a person who won’t stand up for himself. Schumer and Pelosi should have fought back. They should have refused to let Trump big-dog them.

They could have taken the high road: “Until the President learns to address us politely, like an adult, using our proper titles and names — Senator Schumer, Representative Pelosi, Leader Schumer, Leader Pelosi — we Democrats will have no communications with him whatsoever.”

Or they could have gone the Ted Rall route: “We’re sorry, silly fat Orange Donald, that your mother didn’t raise you properly. Until you delete your Twitter account, apologize on TV and sign a contract agreeing to never darken social media again — oh, and no pussy grabbing either — you can go f— yourself.

Either way, they’d have to mean it. That would mean no more meetings, no more tolerating the president’s wanton rudeness. Total obstruction.

I know. It ain’t gonna happen. Democratic leaders obviously believe that they risk debasing themselves if they lower themselves to Trump’s rhetorical level. What they don’t get is that Trump is a bully. The only way to deal with a bully is with shock-and-awe brutality.

The debasement follows the insult. Your decision not to climb into the gutter with the bullying idiot may seem admirable — “when they go low, we go high,” Michelle Obama said — but it allows your tormentor to cast you as a coward. When you allow the bully to insult you over and over and over, as Trump does to his enemies, you tacitly endorse their insults. Why, otherwise, do you tolerate disrespect?

Or, to look at it another way, consider why Trump’s fans love him. They love him because he “says it like it is,” doesn’t take prisoners, doesn’t mince words. One person’s lack of impulse control is another’s courage. Imagine, if a progressive were as rude and aggressive as Trump, how exciting that would be?

On January 26, 2018, Trump was back at it — not that he ever took a break. “DACA has been made increasingly difficult by the fact that Cryin’ Chuck Schumer took such a beating over the shutdown that he is unable to act on immigration!” Trump tweeted.

Imagine you were Chuck Schumer. You’re a U.S. senator. He’s been in Congress since 1974, when Trump was still making his name refusing to rent apartments to black people. Why, you might ask yourself, should I put up with this patak who dares to give me a ridiculous nickname?

Schumer and the Democrats won’t even defend themselves. Do you seriously think they’ll lift a finger for you and me?

(Ted Rall (Twitter: @tedrall) is co-author, with Harmon Leon, of “Meet the Deplorables: Infiltrating Trump America,” an inside look at the American far right, out now. You can support Ted’s hard-hitting political cartoons and columns and see his work first by sponsoring his work on Patreon.)