SYNDICATED COLUMN: Democrats Can Only Beat Trump By Out-Trumping Him 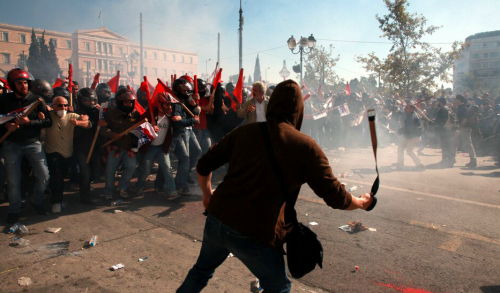 At a water cooler or Starbucks near you, speculating about Donald Trump’s psychological state is America’s newest cultural obsession. Is the president crazy? Or crazy like a fox?

I don’t know. What I do know is that Trump’s Democratic opponents are doomed if they think they can beat him by acting reasonable. Haven’t they learned anything from Hillary’s disastrous “when they go low, we go high” shtick?

Point of order: what follows are musings about political strategy, not an impassioned “Trump is evil and here’s how to get rid of him” advisory column. If this makes you want to read no further, here’s the big reveal: Democrats are congenital wimps.

This Week In Trump (TWIT): the president accused ex-president/drone killer/kitesurfer/eight-figure author Barack Obama of having his phones tapped during last year’s election. Is he right?

I don’t know. What I do know is that corporate media is ridiculing Trump for “offering no evidence.” That phrase was in the New York Times’ headline. Nice qualifier; a similar expression of uncertainty would have saved hundreds of thousands of Iraqi lives during the Bush-Judy Miller days. “Citing no evidence,” said the Los Angeles Times about Trump’s claim. Since when does that corrupt paper care about evidence? If you can see past its crazy tone and placement on Twitter, the substance of Trump’s charge is hardly outlandish.

True or false, Trump’s accusation is a blockbuster. Whether by design or coincidence, the resulting tsunami of coverage wiped the question of whether attorney general Jeff Sessions lied under oath about meeting with the Russian ambassador and whether he made any untoward promises during those rendezvous.

Political observers have noticed a pattern in Trump’s behavior. Whenever he’s under fire, Trump does something bigger and more outrageous.

“Grab them by the pussy,” Trump was caught saying on video just before his key second debate against Hillary Clinton. “You can do anything.” Seasoned politicos, including your humble narrator, thought his campaign was all over. So Trump invited three women who’d accused Bill Clinton of sexual misconduct to attend the debate. It was a gangster move. A WWE move. And no one could stop talking about it.

Again, I’m not weighing in on Trump or his policies here. This is about politics and human psychology and how Trump understands them better than the Democrats.

It has been suggested to me by frustrated Democrats and progressives that Americans should be reminded that the Real Issue is Jeff Sessions’ lying about Russia. They say that the media ought to ignore Trump’s accusation against Obama.

Asking the media to throw shade on PhoneTapGate is insane. Interest in our wild and crazy president is Making the Media Great Again! Newspaper circulation is up for the first time in decades! So are broadcast ratings — because TV cable news covers stuff like this.

There’s only one way to beat crazy: with more crazy.

More over the top.

Love does not Trump hate. It certainly doesn’t Trump Trump.

If I were running the DNC, I’d replace the party’s milquetoast rhetoric of watered-down feints with full-bore Trump-style attacks.

Bad: “I am going to be sending [Jeff Sessions] a letter to have him explain himself.” (Al Franken)

Lame: “This is a very real & serious threat to the national security of the United States.” (Elizabeth Warren)

Better But Not Good Enough: “He has proved that he is unqualified and unfit to serve in that position of trust.” (Nancy Pelosi)

To beat Trump, you have to out-Trump Trump with talking points the media can’t ignore and people can’t stop talking about. Here are some lines that might make Sessions the story again by washing away Trump’s TWIT distractions (the alleged Obama tap and Trump’s Muslim Ban 2.0).

Good: “Jeff Sessions is a traitor. He should be locked up in prison, now.”

Better: “Let’s say Sessions is telling the truth. Let’s assume Jeff Sessions can’t remember meeting with the Russians. Then he’s a goddamn idiot and too stupid to be attorney general. Why is Trump appointing morons to the cabinet?”

Best: “Of course Obama tapped Trump. Snowden told us. Obama tapped everyone! Which is how we know Sessions is a traitor!”

These sample talking points would be scurrilous. They would be unfair. They’d play fast and loose with the facts.

But they’re the only approach that would work.