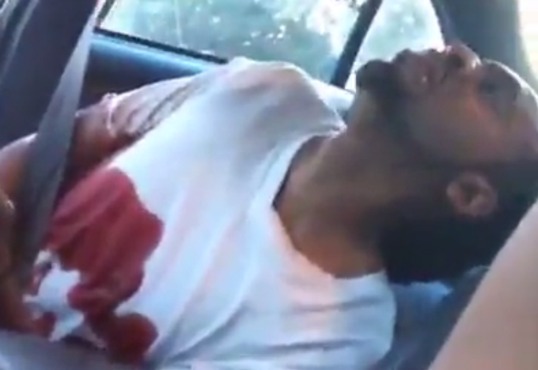 Racism is complicated. When America’s most brilliant thinkers set out to explain its nature in terms as clear as the English language allows, as Michael Eric Dyson did in his searing July 7th essay “Death in Black and White,” even the relatively sophisticated readers of the New York Times didn’t get it. Commenters didn’t understand that Dyson wasn’t criticizing every white person, but “white America” — shorthand for a dominant power structure that is fundamentally racist while (of course) not every white person is.

If anti-racist white people take writing as straightforward as Dyson’s personally, if they take offense at his passion and so miss his message, is there any hope of “black America” and “white America” just getting along?

It’s been a hell of a week. Two more black men, Alton Sterling and Philando Castile, were gunned down by the police under the usual incomprehensible circumstances — events the media, and thus the government, are paying attention to only because someone invented the smartphone. Then a 25-year-old sniper, a veteran of America’s brutal war against Afghanistan, shot 12 police officers at a march in Dallas protesting the deaths in Minnesota and Louisiana. Five died.

Needless to say, the Dallas cops didn’t have it coming. They didn’t have anything to do with what happened in entirely different states.

Well, it shouldn’t need to be said. But it does. Because, no matter how many times we hear public officials tell us that the police protect and serve us, it doesn’t ring true. Three out of four African-Americans tell pollsters they don’t think police are held accountable for their actions. So do 40% of whites.

Let’s be honest. If we think about them at all, we don’t mourn the slain Dallas police officers as deeply as we did the children who died in the day care center blown up in Oklahoma City, or the nightclubbers murdered in Orlando.

We need to talk about why that is.

We have been hearing more about racial profiling, how blacks are targeted by police officers more than whites, how they are physically assaulted more often, how they are charged with more serious crimes for the same offenses, how they get longer prison sentences and harsher fines. Good. This discussion is long overdue. Way too many people still don’t get it.

It is right and proper to focus on Black Lives Matter. To say it. To believe it. A retort that All Lives Matter is far worse than pabulum. Because it distracts from a point that still hasn’t received proper consideration in the media or in electoral politics, All Lives Matter is racist. Even the first black president has addressed the racism behind police violence only in “it sure is sad, we should do better” niceties rather than meaningful, sweeping policy changes. (He could start with blanket presidential pardons of black inmates serving ridiculously long prison sentences.)     Black Lives Matter. That’s what we need to talk about now. For a good long time, too.

One possible place to start is the reaction of many people to the Dallas sniper attack. Like 9/11, it was shocking. Like 9/11, it also wasn’t surprising. You can’t go on acting like a bully forever. The powers that be can’t pressure their victims forever. Eventually the prey strike back. No, it isn’t justified. Nor is it right. But it is chickens coming home to roost.

Like the Bush Administration after 9/11 (“Why? Why do they hate us?”), the police and the political elites the police actually protects and serves look silly when they pretend that they can’t possibly imagine why anyone might dislike them. “There is no possible justification for these kinds of attacks or any violence against law enforcement,” President Obama said after Dallas. No justification? Sure.

No possible justification? Before they blew him up with a robot bomb in an extrajudicial assassination (there weren’t any hostages), suspect Micah Johnson told police negotiators that he was “upset about the recent police shootings…[that] he wanted to kill white people, especially white officers.” You’d have to be especially thick, or really really white, not to see why a black guy might snap after watching the Alton Sterling and Philando Castile snuff videos.

Obama continued: “Anyone involved in the senseless murders will be held fully accountable. Justice will be done.” Naturally, Obama was referring only to justice for the murdered police officers. There’s never any justice for those murdered by police officers (c.f., Freddie Gray, Michael Brown, Walter Scott, Eric Garner, etc.).

There’s a lot to worry about in all this. As for me, I’m concerned that the true nature of the police, the roots of its brutality in its role as the armed guards of the ruling classes, has been obscured by the racial divide. Racism is real. It’s complicated.

So is class warfare.

Even if you are privileged as I am – white, male, able-bodied, Ivy League-educated – odds are that your interactions, like mine, with the police are generally unpleasant. Mostly, I run into them when they pull me over to give me a ticket. If I’m lucky, they are merely rude, overbearing, aggressive and condescending. Once in a blue moon, a cop manages to be merely gruff. And I’m lucky. I’ve seen the way cops act in black neighborhoods. It’s much, much worse. They’re disgusting.

I had a bad experience with a Los Angeles police officer in 2001. He arrested me for jaywalking — falsely. He roughed me up and handcuffed me. This being America, I couldn’t help wonder whether he might have targeted me because he was black and I was white. But he never said anything that indicated that. Maybe he had a quota to fill.

Black or white, the police are paid to oppress, not protect. Black or white, citizens have good cause to be afraid of them. That’s the nature of the system. It’s another reason the system has got to go.