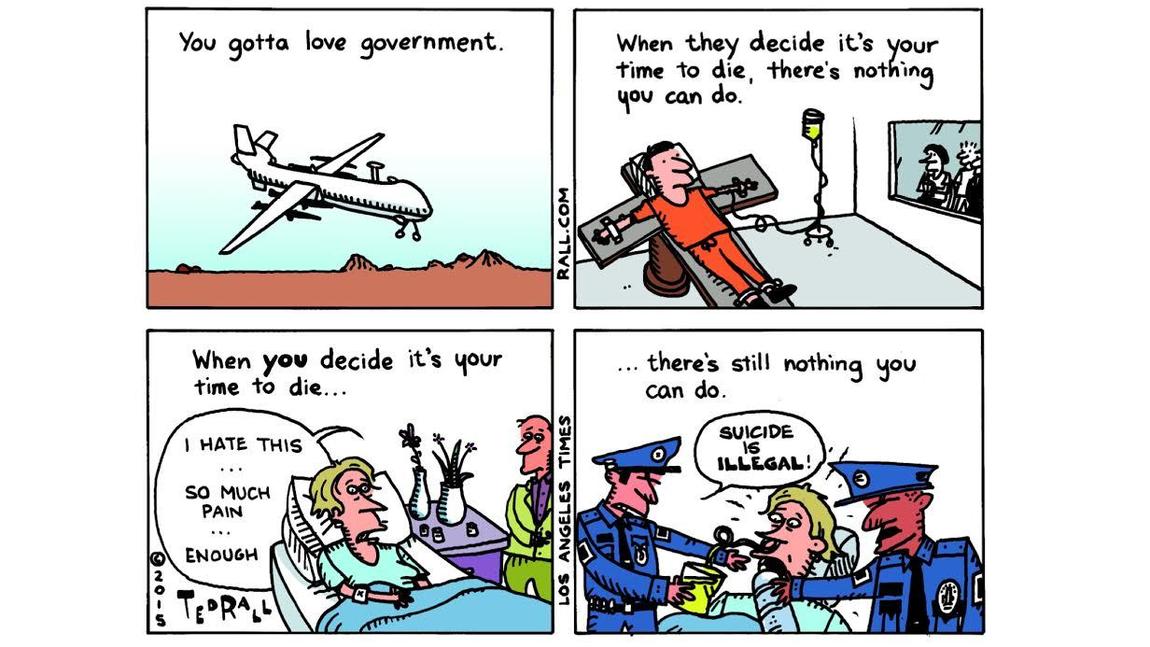 I have never understood why society tries to prevent people who want to die from doing so.

As a young Catholic, I was told that suicide was a sin. My priests couldn’t explain why. Besides, assuming that the suicide attempt is successful, you’re dead. Who’s going to shake you down for penance?

But assisted suicide — helping someone kill himself or herself, typically to bring an end to a painful terminal illness — is illegal in most of the United States, including California. But a proposed bill could change that.

“California’s new legislation is modeled on Oregon’s, making assisted death available to those 18 or older who are diagnosed with a terminal illness that is expected to result in death within six months, provided they are mentally capable of making healthcare decisions. The proposal would go further, giving pharmacists and physicians legal immunity in such deaths,” Patrick McGreevy reports in The Times.

Passage is anything but a shoo-in, in part due to opposition by religious groups. It’s almost as if the living are members of a club, and anyone who wants to quit makes those who remain feel insecure.

But there are also valid reasons to worry that unscrupulous political leaders and decision makers in the healthcare industry could abuse legalized euthanasia. Not least is the example of the Nazis’ so-called euthanasia program of killing disabled people in gas vans and mass shootings, which began before the Holocaust.

Advocates for disabled people also are against the proposal, which could become a ballot proposition should it fail in the Assembly. They don’t trust the corporate healthcare industry: “There’s a deadly mix when you combine our broken, profit-driven healthcare system and legal assisted suicide, which would instantly become the cheapest treatment,” Marilyn Golden, a senior policy analyst for the Disability Rights Education and Defense Fund, told Times columnist George Skelton. Death panels, in other words.

This is a complicated issue. But my sympathies lie with the right of sick individuals to decide — free of pressure from family members or hospitals looking to save money — if and when they have suffered enough and want to opt out. If there’s a chance for recovery, doctors clearly have a moral obligation to pull out all the stops. When there’s not and the future only points to more suffering, not so much.

The inspiration for this week’s cartoon is the paradox of a government that cavalierly kills people regularly, at will and often unnecessarily. It does so with drone strikes overseas, or executing inmates who pose no threat to anyone while they are locked up in maximum security prisons here, or more often through neglect — by failing to help the poor, unemployed, underemployed, mentally disabled and other marginalized people.

Government wants to decide whether you live or die, but it won’t give you the same choice. It’s sick.