Only Biden Can Stop This Political Dumpster Fire Redux 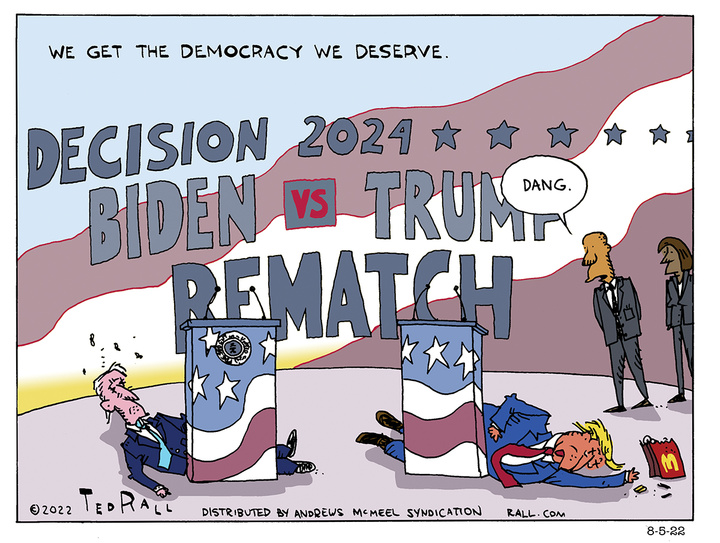 Grover Cleveland beat Benjamin Harrison in 1884. The same men faced off in 1888, with the opposite result. A second rematch took place in 1892, and Cleveland was restored. If you died in 1892, you didn’t miss a thing during your first four years of death.

What could be drearier or more indicative of calcified politics, save for four consecutive terms of FDR?

Since Joe Biden’s milquetoast Democratism basically make him Hillary Clinton not-in-a-pantsuit, we now face the dreadful possibility of a third Trump run and a second Biden run that feels like his third. This could be a presidential campaign between two eldercoots we would have been better off never having seen run for, much less achieve, control of the executive branch in the first place. And it could happen all over again.

A Trump v. Biden rematch, of course, is the exact opposite of what we want.

Two years from now, on Election Day 2024, Donald Trump will be 78 and Joe Biden will be nearly 82. Nancy Pelosi will be 84. There’s nothing wrong with old age per se — wisdom, experience, blah blah blah — but Biden, 78 at the time, didn’t have the energy to run a full-fledged campaign last time. What is he going to do when he’s 82, campaign from someplace even more convenient than the basement of his house? Will he Zoom in from bed?

A nation with this many octogenarians at its helm feels more like the Soviet Union during the bitter-end pre-collapse 1980s (Brezhnev, Andropov and Chernenko all died in short order) or Zimbabwe at its most wildly dysfunctional at the conclusion of Robert Mugabe’s endless reign. A country doesn’t have to be governed by Millennials to be vibrant or successful. Too many young people in charge can lead to disaster — look at Twitter before Musk swept in. Still, a repeat contest between two incredibly old white guys is algorithmically engineered to generate a tsunami of apathy.

Nobody needs this retread. Well, Trump needs it; he thinks prosecutors will be reluctant to indict him for one of the myriad of crimes he has committed now that is a declared candidate for president, and he is right. But two-thirds of the voters, to the extent that they matter anymore, don’t want Trump to run again. Here, finally, we find bipartisan common ground: two-thirds of Americans also don’t want Joe Biden to run again!

True, they are different two-thirdses. But there’s overlap. Millions of Americans sing in perfect harmony that they want something or someone or two someones different. That has to count for something — even if it will take a week or two to tally in Arizona. A nation cries as one: Don’t run, baby, don’t run!

Like all politicians, Joe Biden says a lot of things that aren’t true. Unlike things that people actually want, like abortion rights and student loan forgiveness that he lies about, Biden is almost certainly lying when he says he’s running again. And most Americans believe and hope that he’s lying about that.

But he may be telling the truth.

Democrats lost the midterms. But they beat the point spread. So they’re declaring victory. Even as Biden goes from a Democratic House and Senate to a Republican House and Democratic Senate, he is upgrading his report card like a kid using a pencil to change a D to a B. After such a magnificent pyrrhic victory, maybe he really should run again! The New York Times and at least part of the White House staff seems to think his “victory” has earned him another shot at the White House. “[Biden] regularly notes that he is the only person who has ever defeated Mr. Trump, implying that he would have the best chance of doing it again,” the newspaper reports.

I don’t see the logic. Then, neither does Biden.

The United States has a pretty lame voter participation rate. In a country where it is already hard to convince people that they should care about politics and engage in the electoral system, nothing could be less exciting than recreating the 2020 presidential election—a race that only became exciting after Trump lost and tried to overthrow the government.

Which he did lamely. A younger despot’s putsch would have had more oomph.

But, as referenced above, Trump will stay in, do or die. He must, to stay out of prison. Perhaps Ron DeSantis or some other evil Republican will win the nomination instead. But right now, it’s Trump’s to lose.

Biden, therefore, is the only human who can spare us from the horror of a 2020 replay. If he really loves America, if he cares about the American people, he will do the right thing and refrain from running again.

Thus clearing the field for Hillary.