How We Got Here: A Brief History of the Ukraine Conflict 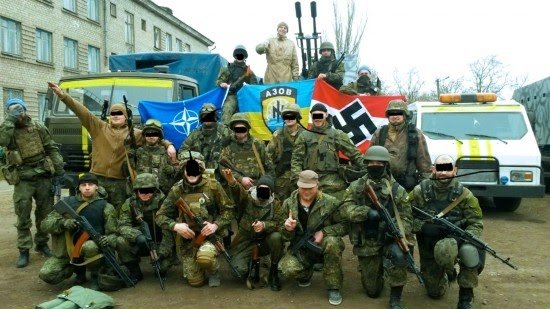 American media outlets characterize Russia’s invasion of Ukraine as, variously and concurrently, the bloodthirsty act of a Hitlerian madman, part of an attempt to reconstitute the former Soviet Union and, predictably continuing the silently-debunked Russiagate narrative of the last six years, an assault on the concept of democracy motivated by President Vladimir Putin’s supposed fear that his own people might get jealous of the freedom next door. Senator Marco Rubio even implied that U.S. intelligence officials believe two years of COVID lockdown drove Putin nuts.

Any, some or none of these explanations born of pure speculation may be accurate. None of them is as likely as something simpler. The fall of the Soviet Union was followed by three decades of nearly constant provocation and encirclement by the United States and its Western allies. Putin decided enough is enough; here’s where we draw a line on the steppe.

Frenemies fighting the common threat of Nazi Germany, World War II concluded with Europe divided along the lines where the Allies and the Red Army met in 1945, with Germany divided between the two.

Proxy conflicts in which the Soviets took sides in Turkey, Greece and Czechoslovakia prompted Western European nations to join the North Atlantic Treaty Organization, a U.S.-run collective-security arrangement formed in 1949 under President Harry Truman. Famously, an attack against one member is considered as an attack against all. Weirdly, no one was bothered by the fact that World War I began in large part because of a similar set of entangled alliances.

The USSR retaliated by grouping the Eastern European countries under its domination under the Warsaw Pact. This 1955 alliance was structured as a direct response to NATO and organized the same way except that all major decisions were controlled directly by Moscow, whereas NATO theoretically required unanimous consent by its members.

The Soviet Union was disbanded in 1991. Russia, economically devastated, politically demoralized and militarily emasculated under the incompetent and corrupt presidency of alcoholic pro-Western President Boris Yeltsin, became merely the largest of 15 now-independent former Soviet republics. Russia has three-quarters the land mass and half the population of the old USSR.

The Warsaw Pact went away. Yet NATO lived on.

NATO’s website explains: “NATO endured because while the Soviet Union was no more, the Alliance’s two other original if unspoken mandates still held: to deter the rise of militant nationalism and to provide the foundation of collective security that would encourage democratization and political integration in Europe. The definition of ‘Europe’ had merely expanded eastward.” Toward Russia.

Russia focused inward, transitioning into capitalism. Yet the West and NATO acted as though the Cold War had never ended.

In 1991 NATO was far away from Russia. The post-communist Russian Federation was separated from NATO territory by Eastern Europe plus the former Soviet republics of Moldova, Ukraine, Belarus and the Baltic republics of Lithuania, Latvia and Estonia, also former republics of the USSR. That soon changed.

Over the next 20 years all of the former Warsaw Pact nations of Eastern Europe joined NATO, shrinking an 800-mile buffer zone by half. The Baltics signed up in 2004.

Moldova’s constitution guarantees neutrality so it will never join NATO, but its geopolitical status as a buffer state is relatively inconsequential. Belarus remains a staunch Kremlin ally. Which brings us to Ukraine.

If Ukraine were admitted to NATO, Russia’s buffer zone would vanish. In its place would appear a vast open corridor between Russia and Europe. Ukraine, the same route Nazi Germany used to invade the Soviet Union in 1941, resulting in the deaths of 27 million Soviet citizens — the same place where many Ukrainian locals greeted advancing German forces as liberators — would fall under the control of the NATO alliance. Russia’s enemy would be at its border.

The current Ukrainian government wants to join NATO. It came to power as the result of a U.S.-backed coup d’état. Ukrainian President Viktor Yanukovych, democratically-elected and pro-Russian, was deposed in a 2014 covert operation carefully orchestrated by the Obama Administration. “The United States had no right to try to orchestrate political outcomes in another country—especially one on the border of another great power,” Ted Galen Carpenter of the Cato Institute commented in 2017.

Adding to Russian anxiety, right-wing extremists, including neo-Nazis, played an outsized role in the 2014 Maidan uprising.

Now notorious anti-Semitic paramilitary groups like the swastika-wearing Azov Battalion have become an important component of the official Ukrainian military. As the media watchdog group Fairness and Accuracy in Reporting notes, however, American media consumers are not being told about this. FAIR reports that a “crucial case of propaganda by omission relates to the integration of neo-Nazis into the Ukrainian armed forces. If the corporate media reported more critically about Western support for the neo-Nazi-infested Ukrainian security services, and how these forces function as a front-line proxy of U.S. foreign policy, public support for war might be reduced and military budgets called into greater question.”

The BBC reported back in 2014 that “ultra-nationalists, and their extreme right fringe, are a small part of the overall campaign — a subgroup of a minority.” But the leaders of the new government “have at various points seemed unable, unwilling or even afraid to rein in the radical right, who are mostly concentrated in an umbrella organization called Right Sector.”

Azov has grown since 2014. It has now become a movement with its own politicians, newspaper, even children’s camps.

Another far-right extremist group, C14, now controls Ukraine’s police and National Guard, according to Reuters. The Trump Administration considered declaring Azov and the Ukrainian National Guard a terrorist organization. Now, The New York Times reports, alt-right militants from France, Finland and other European nations are flocking to fight Russia alongside the Azov Battalion, whose ranks include soldiers wearing Nazi insignia.

Though Jewish himself, Ukrainian President Volodymyr Zelenskyy has turned a blind eye to the neo-Nazis within his own government. So have his American allies. Sam Biddle of the Intercept reported last week that “Facebook will temporarily allow its billions of users to praise the Azov Battalion, a Ukrainian neo-Nazi military unit previously banned from being freely discussed under the company’s Dangerous Individuals and Organizations policy.”

For Americans, an enemy of an enemy is always a friend. Unlike Russia, Americans don’t live next door to a country that welcomes Nazis into its military.

NATO repeatedly provoked Russia over the past few decades, most notably planning to place ballistic missiles in the former Warsaw Pact nation of Poland. “From what we have seen in recent years—the creation of a missile defense system, the encirclement of Russia with military bases, the relentless expansion of NATO—we have gotten the clear impression that they are testing our strength,” then-Russian President Dmitry Medvedev observed in 2008.

Until last August, NATO and the U.S. had fully occupied Afghanistan—which borders the former USSR—for 20 years.

The United States portrays itself as a critic of aggressive militarism carried out by Russia. At this writing, however, Russia has one military base outside the former Soviet Union, in Syria. The United States has over 800 around the world. After the 2001 terrorist attacks in New York and Washington, the Bush Administration rented military airbases from the former Soviet republics of Central Asia along Russia’s southern border, which it claimed it needed in order to wage airstrikes and deliver materiel inside U.S.-occupied Afghanistan.

The U.S. took over the Khanabad base in three former Soviet republics bordering and near Russia: Uzbekistan, Bishkek airport in Kyrgyzstan, and the airfield in Kulob, Tajikistan. NATO forces set up a base at Termiz, Uzbekistan, and outside the Tajik capital, Dushanbe.

The U.S. troop presence in former-Soviet Central Asia ended in 2014. But maintaining American military forces within striking distance of southern Russia is clearly still on American officials’ minds. In April 2021 the new Biden Administration reached out to the governments of Kazakhstan, Uzbekistan, and Tajikistan about using bases there.

None of this is to justify all of Russia’s actions in Ukraine. Still, it is impossible to accurately assess the current crisis in the far reaches of Eastern Europe without considering Russia’s motivations. After years of encirclement in a one-sided Cold War directed at Russia, a Ukraine that is anything less than at least neutral (or ideally an ally) is simply too close for Moscow’s comfort.