The Democratic Centrist-Progressive Alliance Hinges Upon Build Back Better 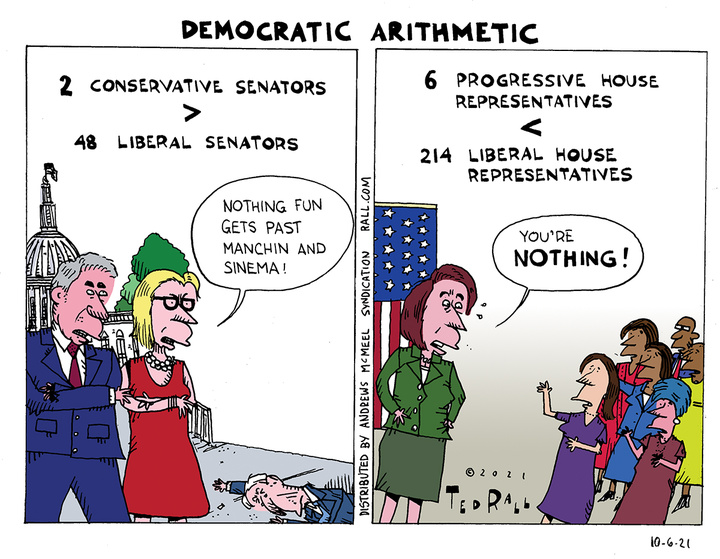 “At a certain point, we have to trust one another,” Representative Peter Welch (D-VT), said as he left a meeting of the Progressive Caucus meeting. Progressives had just acquiesced to President Joe Biden’s pleas that left-leaning House members sign off on the $1 trillion infrastructure spending bill they’d been holding up in order to pressure the chamber’s centrists to support their own $1.75 trillion package of social programs.

The progressive bloc extracted a written promise from five key centrists to vote for the Build Back Better bill assuming that the Congressional Budget Office verifies the math behind the spending.

The question grassroots progressives are asking themselves is: is trust wise? Will the corporatists deliver? Or are we just rubes who about to get rolled again?

The immediate electoral viability of the Democratic Party depends on the answer.

Progressive voters and activists who form the ideological base of the party and provide most of its energy believe they have long been taken for granted by the Democrats’ dominant, minority, corporatist ruling elite. Their long-simmering resentments boiled into explosive rage after the insulting and, they believe, corrupt manner Bernie Sanders and his supporters were treated by the DNC and its blackout-enforcing media allies throughout his 2016 primary challenge to Hillary Clinton and during the Democratic National Convention.

Clinton’s campaign openly courted anti-Trump Republicans in the general election campaign, telling progressive Democrats she didn’t need them to win. Millions of them took her at her word, sitting on their hands on election day, handing the presidency to Donald Trump.

Then the defeated centrists had the nerve to blame progressives for not voting.

Incited by anti-Trump fever, left populists turned out for Joe Biden in 2020. But they did so reluctantly, doubly so after that year’s primary process featured yet another overt DNC operation to derail Sanders. The Vermont senator’s early primary surge crashed the night before Super Tuesday, when sleazy southern party boss James Clyburn orchestrated simultaneous endorsements of Biden by former rivals Amy Klobuchar, Pete Buttigieg and Beto O’Rourke, an establishment favorite who entered late after being recruited by DNC insiders in order to stop Sanders.

Biden ran as the anti-Trump, nothing more. He didn’t campaign on—and therefore can’t claim a mandate for—ambitious infrastructure and social spending measures, which were only conceived after taking office in order to heal his rift with his party’s progressive wing. As anyone who has been near a news source over the last six months knows, the president has had a difficult time convincing right-leaning Democrats like Kyrsten Sinema of Arizona and Joe Manchin of West Virginia to play ball. Separating the spending packages into the relatively easy-to-pass infrastructure and the challenging social program bills was an inelegant, consummately inside-the-Beltway solution that may be about to blow up in the Democrats’ faces.

The White House promises that Build Back Better is 100% revenue-neutral and therefore won’t increase the deficit. The five moderate holdouts who signed the House letter say their support is contingent on the CBO confirming that claim. But the CBO already determined that the infrastructure bill by itself would increase the deficit by $256 billion. One of the more generous assessments of Build Back Better, by Ohio Republican Senator Rob Portman, found that it would add $100 billion to the Treasury. That still leaves an overall shortfall big enough for the five congresspersons to justify backing out.

Assuming it survives, Build Back Better goes to the Senate where the infamous parliamentarian will rule on what bits and pieces of legislation are permitted in the reconciliation process. Will progressives still be happy with what’s left? Will Manchin and Sinema drop their long-standing objections?

Then, assuming it gets through the Senate — which seems like a long shot at this point — changes have to be reconciled between the House and Senate versions.

Progressive voters aren’t going to be happy unless the lion’s share of what’s currently in Build Back Better gets signed into law by President Biden. If the results are significantly watered-down or, still worse, nonexistent, hell has no wrath to compare with the rage of progressives who have long had it with the Democratic Party.

Their sense of betrayal will be boundless. They will be furious at themselves for having been so gullible as to have trusted the perfidious centrists who repeatedly screwed them over. And enough of them will be anywhere but at the polls on election days 2022 and 2024 to make all the difference.