Taliban Fashion and Why It Matters 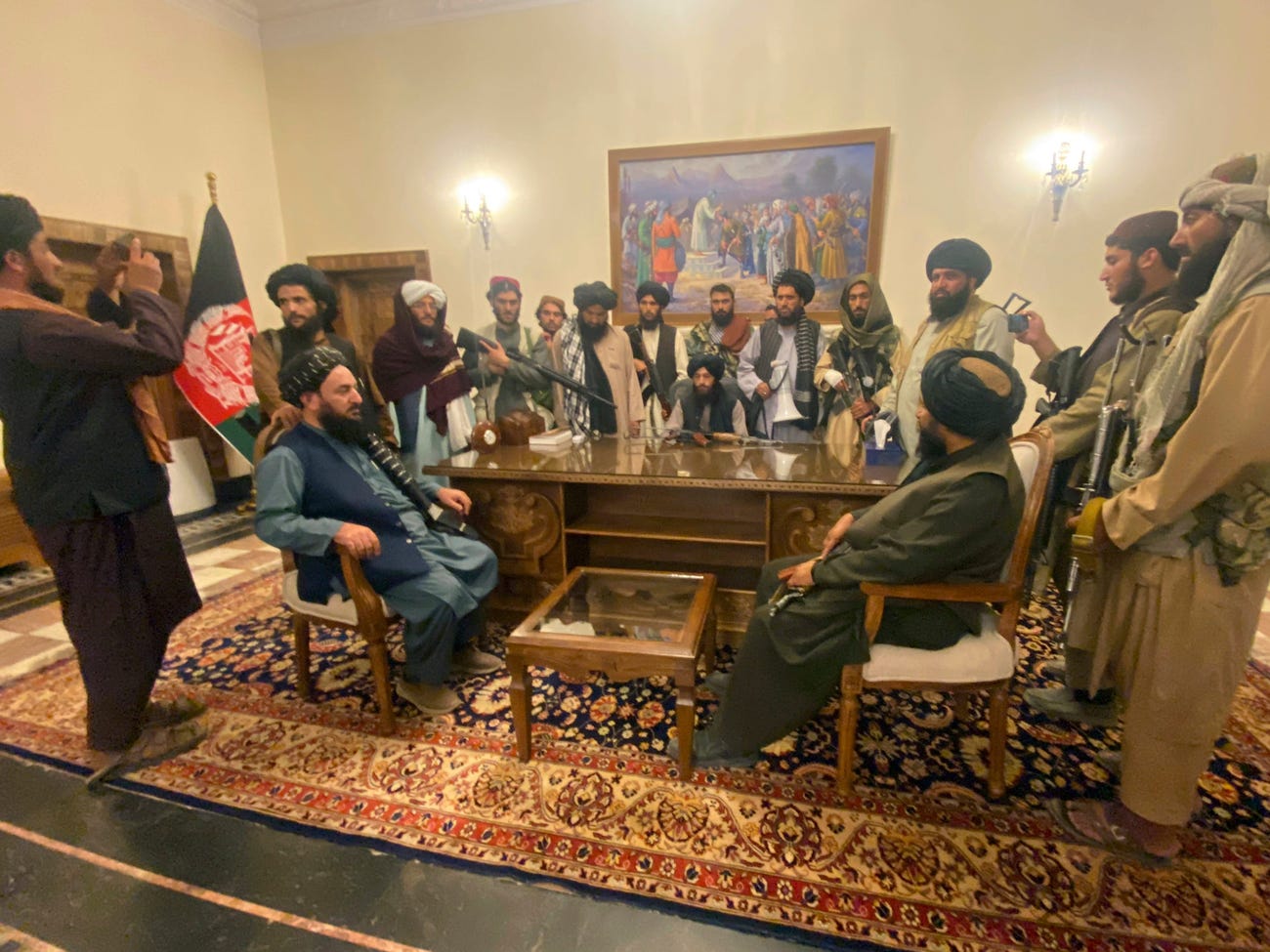 The British tabloid The Daily Mail is taking small-arms fire for publishing an article bearing the headline: “It’s the trendy Taliban! Young fighters accessorize their traditional clothes with sunglasses, stylish trainers and own-branded baseball caps — while cracking down on Western dressing.” Though the piece took note of the brutal comportment of Afghanistan’s new and former rulers, woke journos at the Independent, Guardian and Politico slammed the very idea of talking about the wardrobe choices of the world’s most notorious insurgent army as “ridiculous,” a “puff piece” and “a Godawful take.”

“Call me old-fashioned but the thing that stands out from the photos isn’t their fashion choices but that they are carrying MASSIVE GUNS,” the Politico railed.

They’re not looking hard enough. If big guns defined the Taliban, I would be more worried whenever I see heavily-armed soldiers at Penn Station.

Fashion matters more than you think and less than the fashion industry knows. Meryl Streep’s passionate rant in The Devil Wears Prada comes as close as possible to validating the socioeconomic importance of the fashion industry. Call me 60% convinced; no one could have done better. Anyway, Taliban 2.0 clothes and accessories are anti-fashion. That’s why they matter.

“There is no easy way to describe the [anti-fashion] movement,” writes fashion blogger Mireya Perez. “Anti-fashion does everything fashion doesn’t do. It is a movement that goes against the mainstream.” Fashion signifies. Devotees of anti-fashion reject what everyone else takes for granted.

Americans don’t talk about the raging cultural and political battle across the globe about the future, but people in other countries do. Modernizers want their country to feel, look and work more like the United States and Europe: high tech, long hours, low pay, zero connection. Traditionalists reject modernizing for the sake of globalization. Fashion is an under-discussed barometer of this struggle.

There was once a time, within the memories of Baby Boomers and Generation Xers (Millennials remember nothing), when the boldface names of international politics groomed and dressed themselves with disregard or outright contempt for a world homogenized by Western fashions.

Scan group photos of world leaders attending conferences like the G20 or the U.N. and you’ll see a lot of different ethnicities stuffed into off-the-rack business suits. Women don’t get a pass: business jacket over blouse, pearl necklace and big round gold earrings are the required uniform of 21st century post-modern modernity. Nearly alone, the Taliban are bucking the trend.

Thirty or forty years ago, you could scarcely shake a General Assembly without a bunch of Nehru jackets, an esoteric scarf or an African animal print falling out. Saudis and Pakistanis aside, sartorial diversity is as endangered as the cheetah. The bar scene in Star Wars has become after work at Hoolihan’s.

North Korean leader Kim Jong Un began his ten-year reign with the traditional Mao jacket favored by his father and grandfather, an easy-to-understand visual riposte to Western capitalist mores. Yet the baby-faced scion of dead-ender Stalinism quickly jazzed up the Mao cut with pinstripe fabrics. Now he has succumbed. He wears Western-style business suits, albeit with a retro vibe. “Kim Jong Un’s got some cool clothes,” raves fashionista Michael Madden. “If he were from America, he would be one of these fellas we see in Portland, in Brooklyn, one of these hipster guys.” The revolution will be accessorized.

Libya’s Colonel Muammar Qaddafi, Pan-Arabist and the longest-serving despot of both Africa and the Arab world, went his own way when it came to his wardrobe, donning a dazzling array of Dr. Evil suits, Hawaiian shirts, kufis and gaudy bemedaled military uniforms worthy of a Terry Gilliam movie. The way things are going, with even journalist-slaughtering Saudi Crown Prince Mohammed bin Salman ditching his dishdasha for a business suit, there is no place for Qaddafi and his Tarantino-esque brigade of kung-fu-fighting female bodyguards (actual name: The Revolutionary Nuns). Had he survived being blown up by a U.S. drone and subsequently sodomized with a bayonet, Qaddafi would probably be another pinstriped face in the crowd of political cut-and-pasters.

In a world Ameri-homogenized into ever-blander dreariness, the combination of the Taliban’s victory over the most powerful empire in history and their stubborn refusal to change much about themselves, Taliban anti-fashion does indeed matter. One of the most iconic images of the transfer of power in Afghanistan was the photo of Taliban fighters gathered behind the president’s desk recently vacated by the ousted U.S. puppet ruler, Ashraf Ghani. The contrast between heavily-armed fighters and the ready-for-TV choreographed corridor of power was striking; then guerillas’ unabashedly anti-Western clothes and turbans were downright startling. You’re in power now. Where are your suit and ties?

(Ted Rall (Twitter: @tedrall), the political cartoonist, columnist and graphic novelist, is the author of a new graphic novel about a journalist gone bad, “The Stringer.” Order one today. You can support Ted’s hard-hitting political cartoons and columns and see his work first by sponsoring his work on Patreon.