How to Stop the Next Stupid War before It Starts 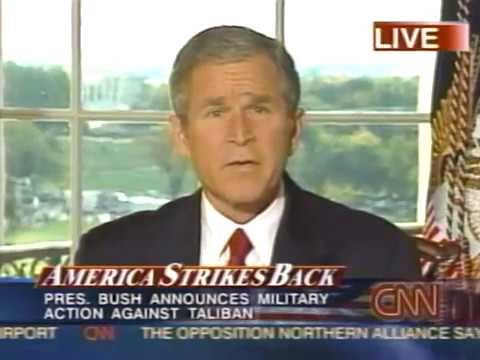 Americans are politically fractured but they agree that our longest war was a mistake. 77% of Americans, including many Republicans, told a recent CBS News poll that they agree with President Biden’s decision to withdraw from Afghanistan. That’s a reversal from the conflict’s early days, when between 85% and 90% of Americans supported the invasion.

What changed? We were lied to; now we know it. The Taliban were characterized by the news media as primitive religious fanatics, a fringe group that ruled by fear in a power vacuum created by our abandonment of the anti-Soviet mujahedin in the late 1980s. In fact they were a popular, homegrown phenomenon perfectly situated to frame themselves as a nationalist resistance organization. To whatever extent that Afghans felt “abandoned,” they wanted cash and infrastructure with no strings attached. Instead we imposed a corrupt puppet regime that they viewed as a humiliation.

The main casus belli, revenge for 9/11, fell apart after the world’s most wanted man was found and assassinated in Pakistan in 2011. If Osama bin Laden had been living in Pakistan for years, why were we still looking for him in Afghanistan? Why were we paying his Pakistani hosts billions of dollars? Voter support for the war evaporated after the killing of bin Laden.

Barack Obama said “we took our eye off the ball when we invaded Iraq,” which he called the “dumb war.” He argued that “our real focus has to be on Afghanistan.” Now most people agree that they were both dumb.

How do we avoid fighting more stupid wars in the future? How can we stop ourselves from wasting trillions more dollars and thousands of more lives?

First we must remember how most wars start—with government lies. From the Tonkin Gulf non-incident to fairy tales about Iraqi soldiers yanking Kuwaiti babies out of ventilators to Saddam’s nonexistent weapons of mass destruction, American presidents, generals and media stenographers have conned one gullible generation after another into killing and being killed. The truth eventually comes out. By then, though, it’s too late.

The next time a president goes on TV to tell us we ought to go to war, we should turn our skepticism dial up to 11. After all, we’ve been lied to so often in the past—why give them any benefit of the doubt?

Ironically for a country whose values center around free-thinking and rugged individuality, naïvely going along with the call to war is hardwired into our political culture, no matter how outlandish the justification. If the president asks us to sacrifice our lives in a war, we’re expected to comply, no questions asked.

Consider the infamous Supreme Court decision in which chief justice Oliver Wendell Holmes, Jr. famously wrote that “protection of free speech would not protect a man falsely shouting fire in a theatre.” In the case in question, Holmes continued, “the words used are used in such circumstances and are of such a nature as to create a clear and present danger…”

In Schenck v. United States the court ruled that, when it comes to war, there is no room for vigorous debate, much less dissent—First Amendment be damned.

The subject of that case is lost to history: Socialists Charles Schenck and Elizabeth Baer were jailed for the crime of mailing out flyers urging men to resist the military draft during World War I. The “clear and present danger” was not to the country itself. It was to pro-war propaganda. What if the leftists’ argument were to succeed? What if the government had to work harder in order to convince young men to fight and die in the charnel house across the Atlantic?

Holmes came to regret his decision and Schenck was partly overturned and discredited. Yet schoolchildren are still taught that the First Amendment runs into limits with “shouting fire in a theatre.” Those who ought to know better, like Senate Majority Leader Chuck Schumer, went so far as to write that “while the First Amendment protects freedom of speech, no one has a right to falsely shout ‘fire!’ in a crowded theater,” in an op-ed favoring gun control in 2012.

As Christopher Hitchens noted, the governments of Europe and the United States lit and fanned the flames of a war most of its combatants believed to have been pointless. The socialist pacifists were trying to restore sanity.

Someday, no doubt sooner rather than later, this president or the next will take to the airwaves in order to ask us to support another war. War is the most serious undertaking that a nation-state ever considers. It is therefore the highest duty of every citizen to carefully weigh the evidence and justification given to attack a foreign adversary with an open mind including the jaundiced knowledge that such arguments often unravel after the spilling of a lot of blood.

If we had lived up to our civic duty back in 2001, we would have done a little digging ourselves. We would have paid attention to the fact that none of the 19 hijackers was from Afghanistan. We would have noted the news reports that bin Laden was already in Pakistan and that the majority of Al Qaeda’s training facilities were also in that country, not in Afghanistan. We would have listened to academic experts and veterans of Russia’s failed occupation during the 1970s and 1980s, who warned that Afghanistan was the “graveyard of empires” because the one thing that pulled its people together was hatred of foreign invaders.

We should not have given George W. Bush a blank check to invade a sovereign state that never attacked us and never meant us harm. We should have withheld our support and tacit consent. We should have protested and demanded that Congress stop the war before it began.

We should never again take a presidential call to war at face value.