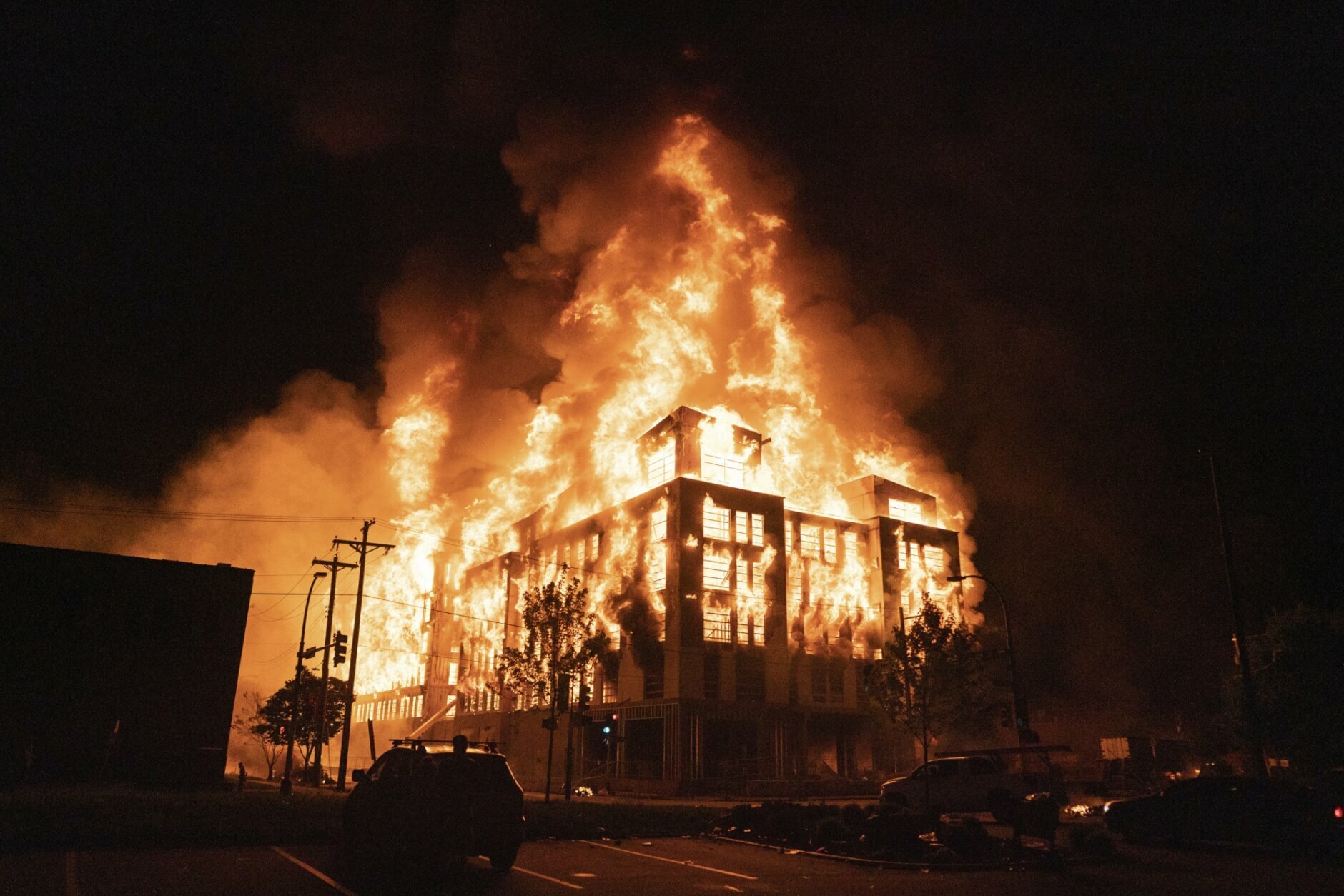 As people of good will celebrate or merely breathe a sigh of relief in response to the conviction of Minneapolis police officer Derek Chauvin in the videotaped torture and murder of George Floyd, it is worth noting that this victory would likely not have occurred had it not been for a spectacular act of property destruction.

Yes, there was that damning video. True, the police chief testified for the prosecution. Those factors caused Chauvin’s rare conviction. But you can’t convict unless you indict first—and there was no move to indict Chauvin before city officials were scared into filing charges.

Floyd was killed May 25, 2020. Three days later, demonstrators burned down the Minneapolis Third Precinct police headquarters, which had been abandoned by fleeing cops. On May 29, the next day after the conflagration, prosecutors announced charges against Chauvin.

In October 2020 a right-wing “bugaloo boi” was charged with setting the building ablaze. But no one knew that right-wing infiltrators had been involved at the time of Chauvin’s arrest.

Throughout the modern history of the American left there has been a raging debate between militant pacifists who believe violence has no place in the struggle for political emancipation and revolutionaries who think powerful institutions and individuals will never relinquish control or allow the radical solutions we need to our worst problems unless they face violence or the credible threat thereof.

(Many on the left do not believe that destruction of property is a form of violence. Ignoring this question in this essay because it would be a distraction from the issue at hand, I use here “violence” as shorthand for any act of political resistance or protest which goes beyond physical passivity, including vandalism, arson, etc.)

From the 1980s until the current Black Lives Matter movement, the pacifists won the argument. Marches against Reagan’s budget cuts and globalization, LGBTQA demonstrations and antiwar protests were coordinated with local authorities to obtain parade permits and internally disciplined by so-called, ironically violent “peace police” who separated violent pro-“black bloc” marchers from the cops. When I raised the temperature of my speech to the Occupy rally in D.C., shouting pacifist organizers dressed me down afterwards for what they believed to have been incitement.

Everyone is for nonviolence as a tactic against oppression. Nonviolence is the dominant tactic to be used against a system we primarily oppose precisely because of its violence at home and abroad. But no one intelligent, no one who studies history, can deny that revolutionary change — the sweeping transfer of power from one class to another — has never resulted from the victory of a purely nonviolent movement. Indeed, the past 40 years of leftist activism in America, a period 99% characterized by nonviolent protest, is a case study in failure. Reagan’s destruction of the post-New Deal social contract was thoroughly internalized by presidents of both parties, including Barack Obama. Outsourcing American jobs and crushing labor unions is standard practice. We fight one war after another, none justified, all of them doomed efforts though we can’t admit it. We can’t even increase the minimum wage.

No one knows whether the conviction of former Officer Chauvin will set a precedent that holds cops accountable for killing unarmed suspects in their custody. Personally, I doubt it. Very few police killings play out on video over nine minutes; defense attorneys can create a bucketload of reasonable doubt among jurors who wonder what they would do in the course of a few confusing seconds. As Minneapolis Mayor Jacob Frey pointed out before Chauvin was charged: “We are not talking about a split-second decision that was made incorrectly,” Frey said. “There’s somewhere around 300 seconds in those five minutes — every one of which that officer could have turned back, every second of which he could have removed his knee from George Floyd’s neck.” Frey called for Chauvin to be charged, but only after two days of rioting raised fears that the police had lost control of the city.

That’s when city officials decided to throw Chauvin to the wolves in a trial with a surprising feature: the police chief testifying against one of his own officers.

What we do know is that Chauvin’s conviction was a rare victory for a left unaccustomed to winning even when, as in the case of the brutal beating of Rodney King, the facts are not in question. We also know that that victory followed days of riots punctuated by a spectacular act of violence that terrified the powers that be into doing the right thing.