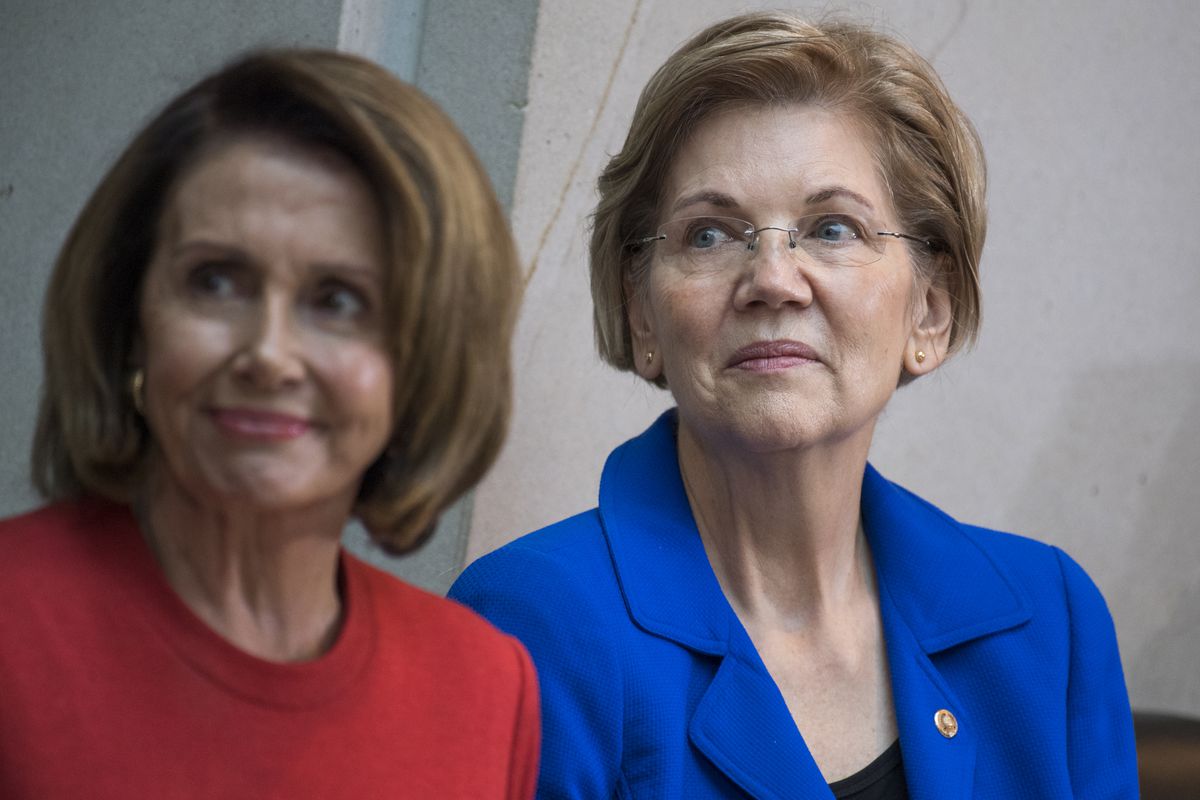 Is Nancy Pelosi using impeachment to mess up Elizabeth Warren?

Some Republicans see the Ukraine/Biden impeachment inquiry as a deep-state coup attempt against President Trump. Some progressives are beginning to scratch the surface of an alternative, but equally cynical, analysis that I think leftists ought to consider:
The impeachment of Donald Trump is a DNC/centrist coup attempt against progressives inside the Democratic Party.
Democrats could have launched impeachment proceedings over any number of more compelling issues: Trump’s child separation policy at the border, the Muslim travel ban, emoluments, the president’s erratic behavior on social media. Why the Ukraine/Biden affair?
The House inquiry is hardly ideal from a framing perspective. The only conceivable reason that the Ukrainian natural-gas company Burisma hired Vice President Biden’s screw-up drug addict alcoholic son, with zero experience in the energy sector, to sit on its board of directors for $50,000 a month was that he was the vice president’s son. Vox notes that “the situation constituted the kind of conflict of interest that was normally considered inappropriate in Washington.” Pre-impeachment, no one knew about this sleaze.
Knowing that his worthless son was working a no-show “job” there for a company brazenly trying to buy his influence, Vice President Biden ought to have been the last Obama Administration official to call the president of Ukraine about anything. Democratic leaders, corporatists to a man and firmly on team Biden, nonetheless are aware that their impeachment inquiry risks exposing their preferred candidate to the kind of scrutiny that can lose an election.
Biden apologists like the New York Times’ resident conservative columnist Ross Douthat are furiously spinning the argument that Americans should ignore Biden’s corruption to focus on Trump’s worse corruption. “Hypocrisy is better than naked vice, soft corruption is better than the more open sort, and what the president appears to have done in leaning on the Ukrainian government is much worse than Hunter Biden’s overseas arrangements,” argues the Dout. But impeachment is a political, not a legal (or legalistic) process. We knew what Trump was when we elected him; this point goes to the president.
So why go after Trump over Ukraine/Biden and not, say, the fact that he’s nuts?
Risks aside, the Democrats’ Ukraine investigation—not successfully, I think, but anyway, it tries—to rescue Biden’s flagging campaign by transforming him into a victim. Liberals love victim narratives.
And now the crux: Elizabeth Warren. When Nancy Pelosi announced the impeachment inquiry, the self-styled progressive from Massachusetts was rising in the polls so fast that many analysts, me included, believed that she had become the most likely nominee. I still do. That goes double following Bernie Sanders’ heart attack, which fuels concerns about his age.
As impeachment proceedings do, the current effort to sanction Trump—remember, odds of getting 67 senators to vote to remove him from office are exceedingly long—will dominate news coverage as long as they go on. It’s going to be impeachment, impeachment, impeachment, 24-7.
The drone of impeachment will eclipse Warren’s remarkably disciplined campaign. She has a plan for everything but the media won’t cover them. Warren trails Biden on name recognition; how will voters get to know her? I’d be spitting bullets if I were her campaign manager.
As I’ve written for The Wall Street Journal, progressive ideas are dominating the current presidential campaign cycle on the Democratic side. Most of the top candidates have endorsed Bernie Sanders’ key 2016 promises: free college, Medicare for All, $15 minimum wage. Nearly three out of four Democratic voters self-identify as progressives.
Bernie lost the Battle of 2016 to Hillary Clinton but he won the war. Corporatists still control the DNC but the vast majority of Democrats lean left. Before Biden entered the 2020 campaign it seemed clear that four decades of Third Way/Democratic Leadership Council/New Democrats/Clintonite rule of the party was coming to an end. A progressive, either Sanders or Warren, would almost certainly be the nominee.
Biden’s campaign is about one thing: blocking progressives.
Samuel Moyn, interviewed in Jacobin, sort of gets it. “[Democratic Congressman] Adam Schiff and many others are not concerned about saving the Democratic Party from its historical errors, including its own disaster in 2016,” Moyn says. “If impeachment becomes a distraction from that much more pressing campaign to save the Democratic Party for the Left, then it will have been a disaster.”
What better way for moderates to recapture control of the Democratic party than by impeaching Donald Trump? The impeachment brigade has progressive allies like AOC’s “squad.” But the pro-impeachment Democrats who are getting airtime on MSNBC, unofficial broadcast organ of the Democratic Party, are the centrist/DNC “national security Democrats.” (Note the new/old branding. Scoop Jackson, call your office.)
Impeaching Trump may not be a fiendishly clever conspiracy to recapture the Democratic Party from the left. It may simply work out that way—dumb luck for dumb corporatists. Regardless, pro-impeachment progressives are dupes.
Why impeach Trump when it seems so unlikely to result in his removal from office? Why risk energizing and further unifying the Republican Party?
As their backing of Hillary over the more popular Bernie in 2016 showed, the old DLC cabal is more interested in getting rid of the progressives in their own party than in defeating Donald Trump. Impeachment may not nominate, much less elect, Joe Biden. But it just might neutralize Elizabeth Warren.
(Ted Rall (Twitter: @tedrall), the political cartoonist, columnist and graphic novelist, is the author of “Francis: The People’s Pope.” You can support Ted’s hard-hitting political cartoons and columns and see his work first by sponsoring his work on Patreon.)