Death to the D.I.Y. Society 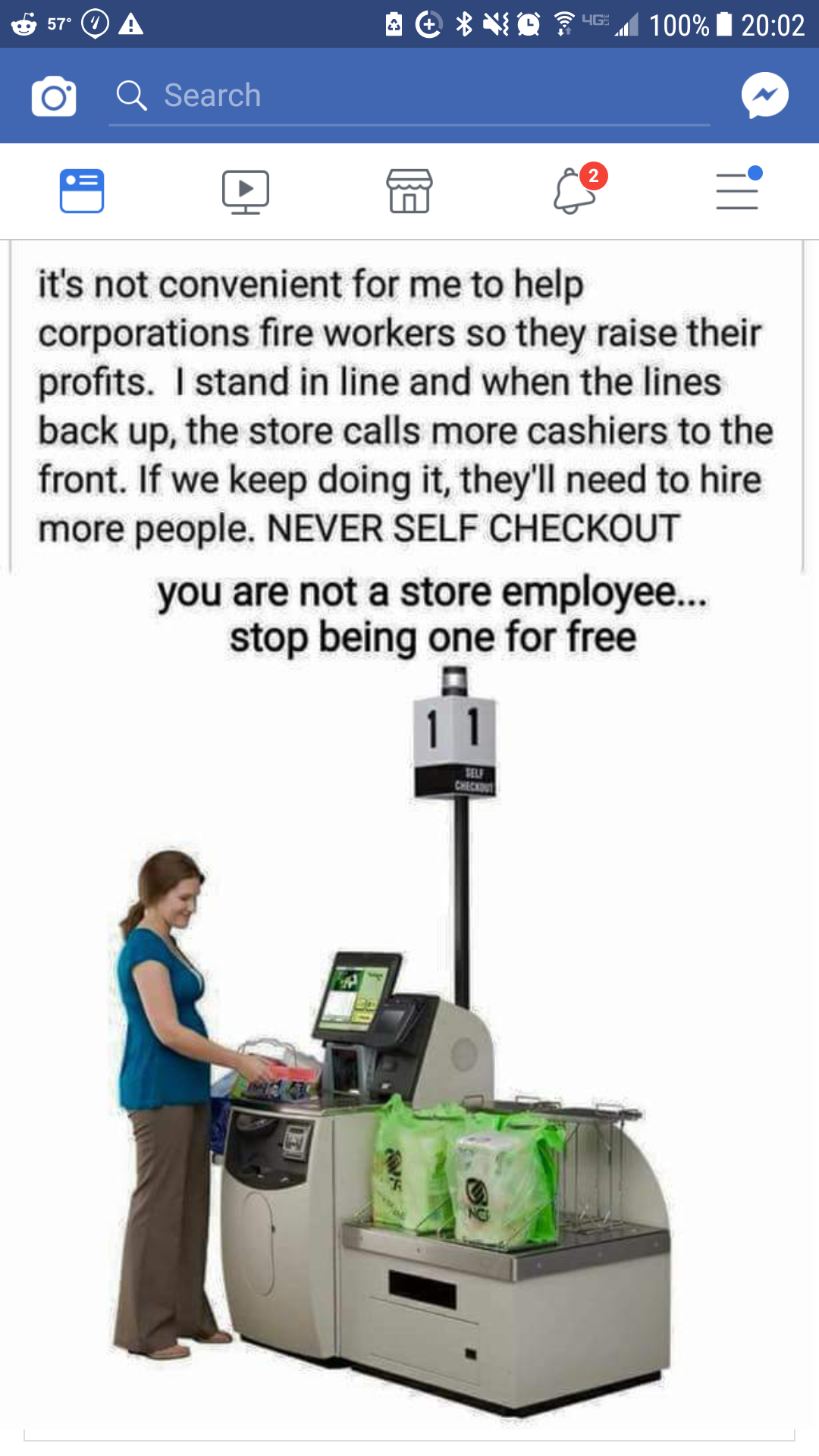 I admit it: my bias derived from self-interest. I was a bag boy. But that didn’t make me wrong when I reacted to the news that supermarkets would make customers bag their own groceries. This, I told my friends at the time, is the first brick in a road to perdition.

Since the 1970s corporate efficiency experts have burdened American consumers with a constantly expanding galaxy of tasks that businesses used to perform for them. Craig Lambert calls it “shadow work”—labor imposed on you that you’re not conscious of.

The Do It Yourself (because companies won’t hire workers to do it anymore) movement faced little resistance in a culture that elevates personal responsibility and rugged individualism. Which is how, in less than half a century, we have become accustomed to pumping our own gas and planning our own vacations and scanning our own groceries and running our own cable TV diagnostic tests, forgetting how much easier life was with service station attendants and travel agents and cashiers and technicians who came to your actual house. Not only do we work harder, we earn less due to the disappearance of service personnel jobs from the    labor market.

I recently visited a Burger King with touchscreen kiosks where you’re supposed to order your food because God forbid BK should fork out $10 an hour to a human being so you can simply tell him you’d like a #2 combo, size medium, drink is a Coke please. Come the Revolution may the scoundrel who thought of this be deported to an exceptionally unpleasant re-education camp.

Now that they have us doing everything ourselves, companies are making us provide our equipment as well.

On United Airlines from Los Angeles to New York recently, the plane was new—and the infrastructure was retro. In place of the seatback TVs that have long been standard on long-haul flights were plastic clips where you’re supposed to place your tablet or smartphone. You can imagine the discussion at United corporate:

“We’ve already conned the idiots into checking themselves in on their phones. Seat-back televisions cost as much as $10,000 per seat to install and maintain. Passengers have their own devices. Let them watch movies on their own tech!”

“Screw ‘em. Plus they have to download our app and register to watch movies, so we collect more data!”

Liberal: “Some people might say we’re being mighty cheap for a company that makes $3.2 billion in profits a year.”

“And now it’ll be more billions!”

I have a smartphone. And a tablet. And a laptop. But as long as aviation remains a for-profit business sector (one with atrocious customer service), I don’t see why I should subsidize a CEO’s outrageous paycheck with wear and tear on my personal hardware.           It’s only a matter of time before we’ll have to fly the planes ourselves too.

Feeling stressed out? Overworked with a million little annoying things to do? It’s not your imagination. The D.I.Y. society has you performing jobs that older generations had done for them by someone paid to do it—and was better at it, too. Every upward tick of the Dow Jones Industrial Average is fed by the rising stress and anxiety caused by corporations schluffing their work onto us.

I would like to think that the market will self-correct by inspiring a new generation of entrepreneurs to build businesses predicated on old-fashioned standards of service. But there’s no sign of that—not for ordinary people. Only the wealthy command bespoke attention, and only from luxury brands.

It is hard for most Americans to grasp how unpleasant the DIY society has made our lives because few of them travel overseas. If they did, especially to the developing world, they would find overstaffed restaurants and stores. Because labor is cheap in those countries, there is always someone available to wait on you. They can’t afford automation so the human touch dominates. Travel agents, for example—if you’re too young to remember the pleasures of having a professional work out a complicated multi-city itinerary and score you a great hotel deal via a personal relationship, you should try it when you go to the developing world. It’s a wonderful vibe and I miss it terribly stateside.

Our only hope is individual resistance.

It’s already begun. Many shoppers refuse to bag their groceries. Others are boycotting self-scanning checkout lines to save the jobs of flesh-and-blood cashiers. “They’re trying to basically herd everyone in, get everyone used to the self-checkouts to continuously cut down on staff,” a Canadian named Dan Morris explained to the CBC. “Machines don’t pay taxes, they don’t pay into the pension plan.” Only 11% of Canadians use self-checkouts.

On that United flight fewer than a third of passengers watched a movie. Who wants to clutter their device with an app for every airline they fly? I will avoid carriers like United and American that eliminate seatback TVs, favor those like Delta that are not, and so should you.

Any time a company gives you a choice between human and machine, like at BK, choose the person. Pick full-serve over self-serve. Patronize businesses that keep people on the payroll and avoid automated BS.

The DIY society will probably win. But we shouldn’t go out without a fight.