SYNDICATED COLUMN: L.A. Times Lawyer to Court: “This is Not a Case About Quote/Unquote Truth” 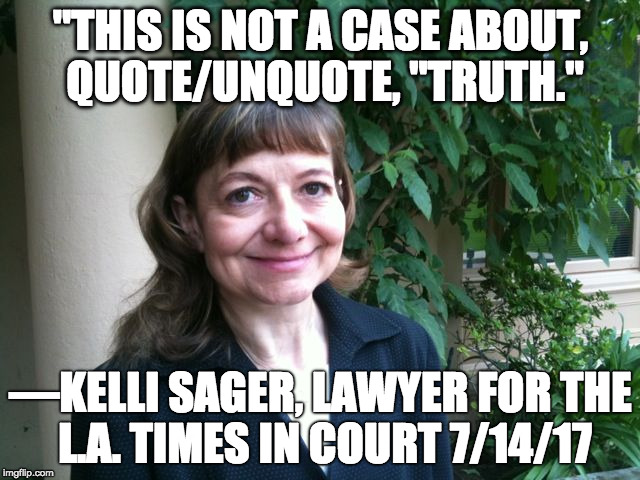 Every defendant is entitled to a vigorous defense. That’s a basic principle of Western jurisprudence.

My belief in that precept was sorely tested by oral arguments in my defamation and wrongful termination case against The Los Angeles Times. It’s one thing for a lawyer to represent a distasteful client like the Times, whose crooked top management sold out its readers to the Los Angeles Police Department in a secret backroom deal. But when framing facts turns into outright lying in court, count me out.

I have great new lawyers. On July 14th, however, I was “between lawyers” because my previous ones had just dumped me and the scorched-earth Times defense team refused to grant me a delay so my new attorneys could get up to speed. So I was forced to represent myself pro se against a senior partner with three decades of experience as a courtroom litigator.

“Since the beginning of this case,” I opened, “the defense has tried to make this a complicated case about technicalities. In fact, it’s actually a very simple case.”

I went on to explain how, after a spotless six-year record as the paper’s cartoonist, the Times received a static-filled audio recording of unknown provenance from LAPD Chief Charlie Beck. Beck claimed the CD-R showed I’d lied in a blog post when I wrote that I was mistreated by a LAPD cop who’d arrested me for jaywalking.

I continued: “In fact, the audio did not show anything of the kind. In fact, the audio was obviously never listened to, because if they had, even if nothing else had happened, they would have been able to, in a quiet room with headphones, they would have been able to hear people arguing with the police officer. They would have heard phrases along the lines of, ‘Take them off. Take off his handcuffs,’ that sort of thing. The Times rushed to judgment. They operated extremely recklessly, negligently. They did not investigate the audio. They did not give me any benefit of the doubt whatsoever even though the doubt was 100 percent.”

She is paid to be unimpressed.

“So Mr. Rall has repeated a lot of the stuff that’s in the [filing] papers. But as we said in our reply [motion] and as the court ruled on the individual defendants’ motion already, this is not a case about, quote/unquote, ‘truth.’”

I am so naïve. We were in a courtroom. If the truth — sorry, the quote/unquote ‘truth’ — doesn’t matter in a court, what does?

The Times’ answer: technicalities. Bear in mind, the Times is a newspaper. Their job is to print the truth.
“That’s not the argument that we made in the SLAPP motion [stet], whether or not the statements that he’s complaining about were true or not,” Sager continued. “The Fair Report Privilege doesn’t need the court to adjudicate the truth. The Fair Report Privilege looks at whether the gist and sting of what the articles reported were from records of the LAPD statements made by people in the LAPD that were official statements and so forth.”

Translation of the Times’ defense: It doesn’t matter if the Times published lies and refused to retract. Under California’s anti-SLAPP law — which is abused by deep-pocketed corporations so they can libel poor individuals with impunity — the Times can write whatever it wants as long as it generalizes about something a policeman said in a police record. This, of course, ignores the existence of defamation and libel statutes.

Sager went on: “Whether the Times had a good motive or bad motive is irrelevant under the law.”

Not really. The Times claims that I am a public figure. If the court agrees, Sullivan v. New York Times, the 1964 case that redefined defamation law, would be pertinent: “The Court held that the First Amendment protects the publication of all statements, even false ones, about the conduct of public officials except when statements are made with actual malice (with knowledge that they are false or in reckless disregard of their truth or falsity).” When the Times published its two pieces about me, they knew that what they were publishing (that their audio showed I was a liar) was false and they didn’t care. Motive matters.

Oh, the lies! Like when Sager said: “So there is no dispute that the records came from the LAPD.”

An hour earlier, in the same hearing, in front of Sager, I had said:

“I dispute that these records were officially released by the LAPD. There is a declaration by the investigative reporter Greg Palast in that giant pile of paper next to you in which he says that he contacted the public information office of the LAPD and in no uncertain terms they denied ever having released the documents and the audio. And in fact, that they’re still in the evidence room over at the LAPD. So what we have here is a case of conflation; a cases of many lies of omission, some lies of commission. But one of the big lies of omission is that the L.A. Times is trying to pretend that Chief Beck is the LAPD. And that is no more true than President Trump is the United States government. The official records have never been released.”

How could she say there was no dispute?

Sager couldn’t argue the facts. So she pretended the facts didn’t exist.

You can read the whole transcript here.
You can support my fight for free speech here.