SYNDICATED COLUMN: Sue the SOBs? It’s Harder Than You Think 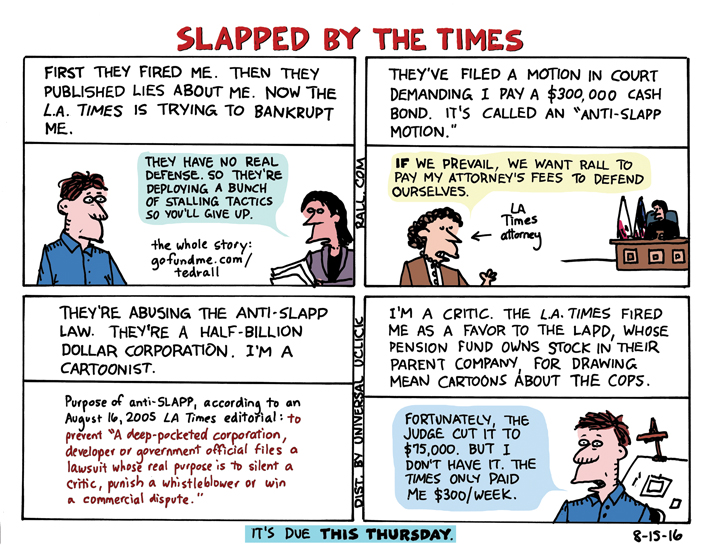 Are you one of those Americans who say it’s too easy to file a lawsuit? As I can tell you from personal experience, it’s anything but. The canard that U.S. courts are jammed up by litigious jerks is based on anecdotes spread by corporate propaganda.

We do need “tort reform” — but we should make it easier to sue, not harder.

What about all those “frivolous lawsuits” you’re always hearing about? You hear about them because deep-pocketed corporations run TV ads complaining that they’re being victimized by predatory trial lawyers. The truth is, big companies don’t want to be held accountable in the courts for their misdeeds.
What most people don’t know is that judges are good at ferreting out frivolous lawsuits before they get very far. If you get sued, the first thing your defense lawyer will do is file a “motion for summary judgment” — a request that the judge throw out the case because it’s weak. Between this and other methods of winnowing out bad cases, at least 95% of civil claims never make it to trial.

The dirty secret is that American courts have created so many hurdles to sue that it’s become daunting for all but the most determined plaintiffs to pursue justice. My case against The Los Angeles Times illustrates how hard it is for an individual to sue a large entity.

The Times fired me as its editorial cartoonist in July 2015, apparently as a favor to LAPD’s police chief, whom I had mocked in my cartoons.

Neither I nor Times readers were aware that there was a conflict of interest between the paper and the fuzz: the LAPD’s union pension fund was a major shareholder of the Times’ parent company.

The Times published an article accusing me of having lied in a blog post. I was able to show that I’d told the truth. But after I sent the Times the exonerating evidence — which attracted worldwide media attention and calls for my reinstatement — instead of issuing a retraction and giving me back my job, Times executives doubled down, publishing a second piece reaffirming the first one. In March 2016, I filed suit in LA Superior Court against the Times for defamation, wrongful termination, blacklisting and other charges.

As I expected, the Times’ defense attorney filed a motion to dismiss my case on the grounds that it was not meritorious. The judge denied.

After that, California’s legal and financial hurdles became nearly insurmountable.
When free speech groups like the Electronic Frontier Foundation get behind something, I’m usually all for it. The First Amendment is my religion. But speech advocates’ support for a federal anti-SLAPP law is wrong — and terrible for freedom of expression. Perhaps they haven’t thought this all the way through.

Twenty-eight states and D.C. have passed anti-SLAPP laws. On paper, they sound great. A “SLAPP” (strategic lawsuit against public participation) is a lawsuit the plaintiff doesn’t think he’ll actually win. The purpose of a SLAPP is to harass you by forcing you to hire a lawyer and tie you up in court. It’s an intimidation tactic sometimes used by big companies to silence individual whistleblowers and critics. Is the problem really widespread? No one knows. No one has done a serious study.

If you get sued in a state with an anti-SLAPP statute, your anti-SLAPP motion is a powerful tool. Discovery (depositions, subpoenaing of evidence) halts. If the judge rules in the defendant’s favor that a suit is frivolous, the case gets tossed and the plaintiff pays the defendant’s attorney fees. This is supposed to make jerky plaintiffs think twice before filing a SLAPP.

There are two big problems with this theory.

First, anti-SLAPP isn’t likely to deter frivolous SLAPPs filed by wealthy companies and individuals. Wealthy entities have more than enough money to litigate anti-SLAPP and to absorb the potential awarding of attorney’s fees to defendants. In fact, proponents have never come up with any statistical evidence that anti-SLAPP laws deter frivolous lawsuits.

Second, the intent of anti-SLAPP laws — to protect the little guy from the big guys — is constitutionally prohibited. You can’t grant rights to some defendants but not others; there are plaintiffs and defendants, period. So there’s nothing to prevent a rich megacorporation from using anti-SLAPP against Joe Schmoe.

Which is how the LA Times, the fourth largest newspaper in the U.S. and part of a $512 million media conglomerate, was allowed to file an anti-SLAPP motion against a $300/week cartoonist. In other words, the Times censored my cartoons and tried to ruin my journalistic career for their owners, the police. Then they accused me of violating their First Amendment rights!

Starting with their anti-SLAPP motion, Times’ lawyers have unleashed a barrage of tactics to delay my suit and harass me. And it’s worked — for nearly a year, I haven’t been able to question Times editors or LAPD officials under oath or subpoena documents that would help me build my case — or my defense to the anti-SLAPP motion. I’ll get my case before a jury in 2018 or 2019 — if I’m lucky.

Or I’ll be broke.

Three days of anti-SLAPP hearings in Rall v. Los Angeles Times begin February 28th in LA Superior Court. My attorneys spent many hours preparing our opposition to that motion. Legal fees aren’t cheap, so the expense of defending against an anti-SLAPP filing before the case even begins is enough to deter some plaintiffs from filing valid lawsuits.

If the judge rules for the Times, I’ll be ordered to pay the Times their legal fees. The Times told the court their bills would be at least $300,000. If she rules for me, the Times can and probably will appeal to the Court of Appeals. That means more work for me and my lawyers and months, maybe another year, of delay — and justice delayed is justice denied. If the appellate court agrees with the Times, my case gets thrown out and I’ll have to pay the Times’ bills — which by then will be significantly higher.

I know I’m right. And I think the law is on my side. But by filing a lawsuit in an anti-SLAPP state, I’m risking bankruptcy. How many would-be plaintiffs get scared away from pursuing their legitimate claims? How many defendants get away with illegal behavior by abusing anti-SLAPP laws?

Anti-SLAPP opens the door to unfair defense tactics. LA Times lawyers invoked an obscure California statute to require me, as a non-California resident, to post a cash bond to guarantee the Times’ legal bills if they win on anti-SLAPP. They asked for $300,000; the judge knocked it down to $75,000. Just to keep my case going — before it begins, really — 75 grand was the cost of entry.

Thanks to concerned readers who gave to my GoFundMe campaign, I raised the $75,000. After I turned over the money to a bond company who filed it with the court (more fees there), the Times tried to get the case thrown out on the ground that the form hadn’t been filled out perfectly.

Congress should pass a federal law about this — one that bans anti-SLAPP laws.