The Killing of Abu Bakr al-Baghdadi: Illegal, Disgusting and Degenerate 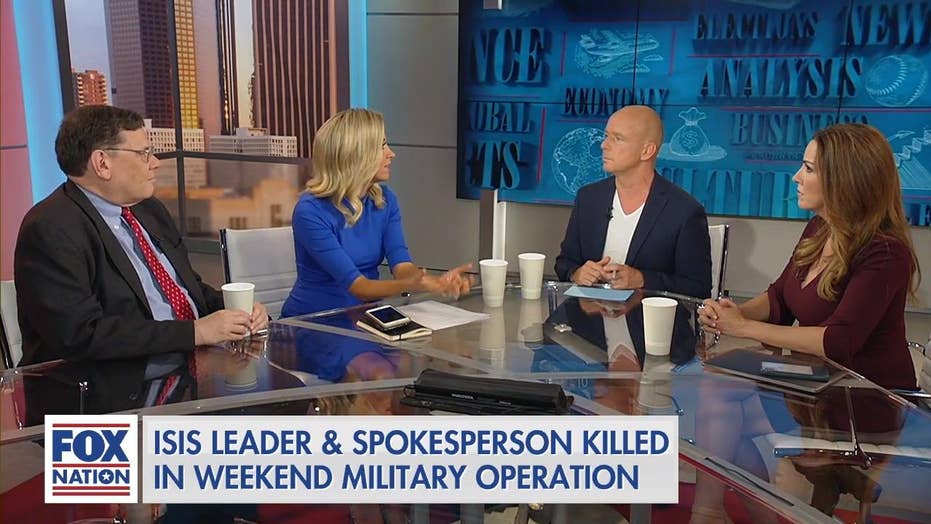 As a society degenerates, life cheapens. The rhetoric that follows death coarsens. Respect paid to fallen rivals is replaced by triumphalism.

Historians observed this trend in ancient Rome. As republic turned to empire and domain expanded and so also arrogance and hubris, vanquished chieftains who previously might have been allowed to keep their thrones as the head of a vassal state were gruesomely executed at public triumphs. Early Christians got tossed to the lions. Gladiatorial combat became all the rage.

The assassination of Islamic State leader Abu Bakr al-Baghdadi by U.S. special forces operating under orders from President Trump reminds us that ours is a nation in moral decline—bloodthirsty and crass, functioning more like a vengeful crime family sending a message to its rivals than a nation of laws, a hell pit so devoid of basic ethics that it doesn’t even occur to its ruling party’s adversaries to raise the question of legality.

Nor does it cross the minds of journalists to mention the United States’ responsibility for the rise of ISIS. Rather than defend the secular socialist government of Bashar al-Assad or staying out of it, the Obama Administration armed and funded the Free Syria Army, parts of which allied with ISIS. This began the civil war. By most accounts al-Baghdadi was radicalized by his time in a hellish prison in U.S.-occupied Iraq—that’s on George W. Bush.

Inserting the caveat that ISIS committed many terrible crimes under al-Baghdadi ought not to be necessary here. Alas, such is the depth of our depravity that to omit such a mention is to risk being accused of approving of ISIS, its religious extremism, its kidnapping, enslavement, torturing and beheading because one suggests, as I do here, that a culture that had not lost its moral moorings would not tolerate what Trump did, what the media fails to question and what even those on what passes for the “left” not only tolerate but cheer.

So here: ISIS sucks. Moving on:

“Thank you and congratulations to our special operations forces and others involved in tracking and getting rid of ISIS/Daesh leader Baghdadi,” tweeted Tulsi Gabbard.

Gabbard is, by far, the least militaristic candidate for president.

“In tone and substance,” Vox noted, “the announcements of the deaths of Abu Bakr al-Baghdadi and Osama bin Laden couldn’t have been more different.” In 2011 Barack Obama used “nearly clinical tones” in his taped statement; Trump made fun of the dead jihadi, dubiously claiming that he left this world “whimpering and crying and screaming all the way” before detonating a suicide vest. He “died like a dog, died like a coward,” Trump told a press conference. Perhaps Caesar had something similarly classy to say about Vercingetorix.

If ISIS had been defeated as the president previously stated, the death of al-Baghdadi wasn’t a military victory. Worse than the BS was the undiluted repulsiveness of the president’s statement. Trump’s degeneracy did not spring out of thin air; rather, it was the culmination of his predecessors’ increasingly shameless contempt for the human lives we have given them the power to snuff out, and their discovery that holding up a severed head as a trophy can get you votes.
Obama played it cool. He put his surrogates in charge of his death-gloating. “If you are looking for a bumper sticker to sum up how President Obama has handled what we inherited, it’s pretty simple: Osama bin Laden is dead and General Motors is alive,” Vice President Joe Biden bragged as he stumped for Obama in 2012. No one in the media questioned the White House about the lack of legal justification for the operation.

“We came, we saw, he died,” Secretary of State Hillary Clinton cackled in 2011 after she watched on TV as a U.S. drone missile hit the Moammar Khaddafi’s car, driving him into the hands of American-armed radical Islamists who sodomized the Libyan leader with a bayonet. Running for president in 2016, she reminded audiences that she’d been in the Situation Room watching bin Laden being whacked.

“Good riddance,” George W. Bush said after Iraqi President Saddam Hussein was hung and decapitated. Bush invaded Iraq on the pretext that Saddam had weapons of mass destruction. In fact, Colin Powell admitted to associates that the evidence he presented in a ballyhooed speech to the United Nations was “bullshit.” Saddam never threatened the U.S. Impeaching Bush for conning America into war, Nancy Pelosi said in 2006, was “off the table.”

We have come a long way since 1981, when Ronald Reagan, a conservative Republican, signed Executive Order 12333, which states: “No person employed by or acting on behalf of the United States Government shall engage in, or conspire to engage in, assassination.”

E.O. 12333—which remains in force—was part of the aftermath of the Church Committee hearings of the 1970s, which exposed assassinations and other illegal acts committed by the CIA in Latin America and elsewhere at the height of the Cold War. American spooks conspired to murder political adversaries and heads of state, mainly on the left, all over the world. Back then, the political class had the grace to pretend to be ashamed.

When asked whether they had ordered extrajudicial assassinations, presidents of that era issued what came to be known as the Glomar response: they refused to confirm or deny. They would never have admitted, much less boasted about, murdering people. The press would never have looked the other way. If they had, the American people would not have tolerated either the politicians or the journalists.

As Long as Enemies of the State Keep Dying Before Trial, No One Should Trust the State

There is no other way to say it: it was a political assassination.

Osama bin Laden was unarmed. SEALs captured him alive. Following brazenly illegal orders from Washington, they executed him. “The [Obama] administration had made clear to the military’s clandestine Joint Special Operations Command that it wanted bin Laden dead,” The Atlantic reported on May 4, 2011.

State-controlled media outlets like The Atlantic claimed that Obama was desperate to avoid a trial that would give the Al Qaeda leader a “high-profile platform for spreading his extremist views.” Left unsaid, as so much is in the American steno-journalism reminiscent of the Soviet Union, was a more pressing reason to silence the Saudi scion.

As much as the families of 9/11 victims craved justice, it was infinitely more important to the U.S. political establishment to deny bin Laden an opportunity to publicly expound on his ties to the CIA and the CIA-funded Pakistani intelligence agency ISI when they were training and funding the “Afghan Arabs” who fought Soviet occupation forces in Afghanistan during the 1980s. Letting people learn that 9/11 would likely never have happened if not for the CIA would have been…awkward.

Such is the fate of enemies of the state.

Last week, not so much an enemy but a man whose existence had become inconvenient, not exactly to the state but certainly to a cabal of powerful men including a former president as well as the sitting one, joined bin Laden in the kingdom of the dead.

The official narrative of billionaire accused pedophile Jeffrey Epstein’s death shifted faster than a New York subway rider when a homeless guy plops down next to them on a hot day. First they said Epstein had been on suicide watch, then that he hadn’t. Prisons are full of cameras yet there’s still no video of Epstein’s death. Then, suicide watch or not, they claimed he’d been checked on every 30 minutes. Then more like every three hours. The medical examiner said his injuries were consistent with strangulation by a second person but then thought better of it and ruled Epstein’s convenient demise a suicide.

I tweeted the morning of Epstein’s passing: “Bill Clinton is the happiest man in America today.” Clinton flew on Epstein’s infamous “Lolita Express” private jet at least six times, including to such sex-tourism destinations as Thailand and Hong Kong. Perhaps he refrained from partaking of the underaged prostitutes and rape victims Epstein stands accused of procuring for his traveling companions. Whatever happened or didn’t, the Epstein-Clinton connection is sketchy as hell.

As is Epstein’s suicide—the first at the Manhattan Correctional Facility since 1998.

At this writing it seems unlikely that we’ll ever know who killed Epstein, whether it be himself or someone else. What we do know is that, if we take the government at its word, it was incompetent and negligent to an unfathomable extent. Being insanely stupid and lazy is its defense.

Now we’re descending into the usual idiotic post-death-of-a-pain-in-the-ass debate between credulists (those who believe anything the government and its pet media say) and conspiracy theorists. Truth: no one knows anything. We weren’t there. The video was—but they deep-sixed that.

We don’t know how Epstein bit it but the fact of Epstein’s death tells us everything we need to know about America today. No matter what, Epstein died because the government let it happen. He was a ward of the state, the highest of high-profile prisoners, a man whose trial stood to expose extreme wrongdoing at the expense of numerous horribly violated victims, yet no one in charge took steps to make certain that he appeared at every hearing happy, healthy and alive.

The powers that be’s carelessness de minimis reflects their confidence that they shall never, ever, be held accountable for anything whatsoever.

So another man vanishes, few questions asked with many left unanswered—intentionally.

So it was with Moammar Khaddafi, the Libyan dictator who signed a deal with the U.S. to rid Libya of a nuclear program only to be blown up by one of Obama’s assassination drones lest he say too much about his relationship with the Bush administration.

So it was with Chris Dorner, the police officer who went on a shooting spree after he was fired by the LAPD, apparently in retaliation for reporting a fellow cop’s excessive force against a mentally-ill suspect, before being hunted down and killed in a cabin the police set ablaze with “pyrotechnic tear gas” cannisters.

So it was with Sandra Bland, the African-American woman beaten, jailed and supposedly suicided by the police for the crimes of failing to signal a lane change, sassiness and the likelihood she would have spoken out about being brutalized.

So it was with a bunch of Nazi war criminals who escaped judgment at Nuremberg.
So it was with Lee Harvey Oswald, whom the authorities couldn’t resist parading before reporters, without screening attendees like Jack Ruby for weapons.

It’s better for those in charge.

Inside the Dictator’s Suite