On Foreign Policy, Joe Biden is Worse Than Trump 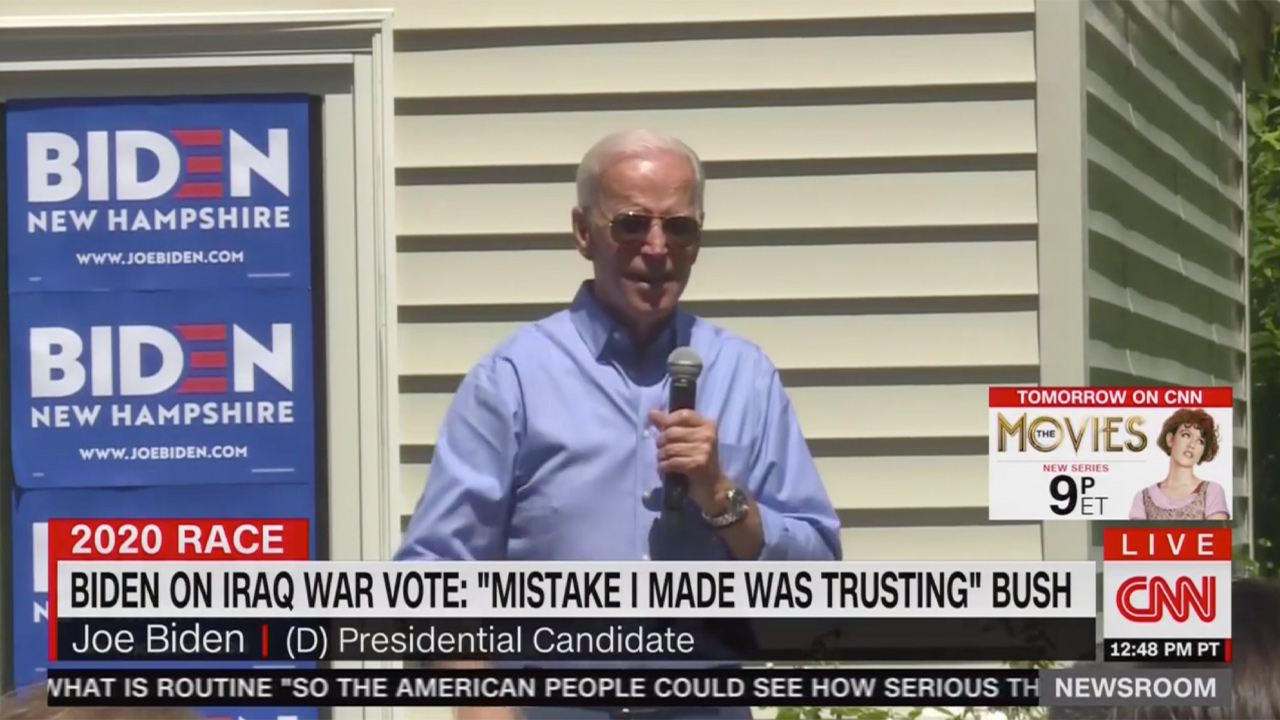 Trump is terrible. Biden is just as bad. In some ways the Democrat is worse.

You shouldn’t vote for either one.

Trump is erratic and unpredictable, which is dangerous. Even so, Biden is worse than Trump on international relations.

At the center of the president’s worldview is a deep, admirable and prescient skepticism about foreign interventionism. Trump began criticizing the Iraq War soon after it began, when the U.S. invasion was still popular. His critiques continued during the 2016 primaries—have you known of another Republican to campaign against militarism? As president-elect Trump told a room full of service members: “We will stop racing to topple foreign regimes that we know nothing about, that we shouldn’t be involved with.”

Trump signed the first peace agreement with the Taliban; he plans to bring home the last American troops in Afghanistan before Election Day—even sooner than required under the deal. He refuses to be goaded into a new Cold War against Russia, has met with the leader of North Korea and has offered direct talks with Iran—positions far to the left of hawkish pro-war Democrats like Hillary Clinton, Barack Obama and Joe Biden.

Because most Americans are self-centered and unconcerned about brown people in other nations, it’s ridiculous yet necessary to remind you that the Afghans we bomb are real people like you and me, that Iraqis are scarred for life when their children are hobbled by American bullets, that Yemenis cry for their dead blown to bits by American missiles, that our insane decision to turn Libya from the most prosperous country in Africa into a failed state with 21st century slave auctions is an atrocity, that we have murdered hundreds of thousands of innocent people in the last couple of decades for no reason that can be justified under common sense or international law.

The United States is the greatest exporter of death, oppression and exploitation on the planet. Every human being has the duty to oppose it. We who pour our taxes into the U.S. government have the biggest duty of all to fight the war machine. That begins with holding the murderers and their enablers accountable for their—there is no better word—evil.

Wars of choice are not horrors of happenstance, like a tornado. Political leaders vote to slaughter and maim men, women and children and ruin economies around the globe, leading to still more death. Some politicians are especially nefarious, convincing other politicians to vote for mass murder.

Most recently, after Trump signaled his willingness to dump U.S.-backed rightist Juan Guaidó and meet with Venezuelan president Nicolás Maduro, a socialist, Biden called Maduro a “dictator” and pledged fealty to right-wing Venezuelan exiles in South Florida. It was the latest in a long line of foreign policy calls that we have come to expect from a right-wing Republican like George W. Bush—yet Biden plays a “Democrat” on TV.

“He’s registered some antiwar positions from time to time, as when he voted against the first Gulf War or opposed the funding of the Nicaraguan contras in the 1980s. But overall, he’s racked up a track record of supporting overseas adventures,” observed Branko Marcetic, writing for Jacobin.

Biden, notes Marcetic, pushed for “the 1999 bombing of Serbia, which actually dissolved the local pro-democracy movement and rallied popular support around the country’s dictator.” Biden voted for the U.S. wars against Afghanistan and Iraq. “I voted to go into Iraq, and I’d vote to do it again,” Biden said in August 2003. Now he defends himself by saying he was so stupid that he fell for Bush’s lies about WMDs.

Biden was the guy who convinced Obama to ramp up Bush’s drone assassination program, which kills 50 innocent bystanders for every 1 targeted “militant”—who often gets away and is rarely a threat to the United States, just to our authoritarian allies. Someday soon Biden’s drone killings abroad will be used to justify killing Americans here at home.

Elsewhere Marcetic writes: “When Reagan invaded Grenada in 1983, bombing a hospital in the process, Biden said he ‘did the right thing.’ When he bombed Libya three years later, killing 36 civilians and dictator Muammar Gaddafi’s 15-month-old daughter, Biden said, ‘There can be no question that Gaddafi has asked for and deserves a strong response like this.’ And when George H. W. Bush invaded Panama three years after that, an outrageous war to depose a leader who had been a CIA asset and that saw dead civilians ‘buried like dogs,’ as one witness put it, Biden called it ‘appropriate and necessary.’”

A vote for Biden isn’t just a vote against Trump. It’s a vote in favor of Biden’s vote to kill one million Iraqis. If we elect Joe Biden, we will send a message to the world: America hates you, we’re glad we killed all those people and we plan to kill more.

It will also send a message to Biden: Heckuva job, Joe!

SYNDICATED COLUMN: If Hillary Clinton Had Won, We’d Be Even Worse What if Hillary Clinton had won 114,000 more votes in four key states? Or, what if she’d picked up the two to three percent of the vote she lost because Bernie Sanders’ supporters sat on their hands on election day? She’d be “Clinton 2” or “Clinton 45” or “the second President Clinton” — and the world would look very different.

In terms of personnel and therefore policy, a Clinton Administration II would look and feel like a mash-up of Obama’s third term and a throwback to figures who populated her husband’s White House during the 1990s. Having moved to the right since Bill’s first term, progressive figures like then-Labor Secretary Robert Reich would be out in the cold. Rahm Emanuel and Timothy Geithner could expect cabinet offers. So could some Bush-era neo-cons like Robert Kagan.

Hillary didn’t promise much change to domestic policy during her campaign. Her biggest proposal was to spend $275 billion on infrastructure, which would have left us $1.3 trillion short of what’s needed. Not that she could have gotten it through the Republican Congress.

The alternate presidential history of 2017 differs most significantly in two respects: foreign policy, and tone.

Clinton’s liberal supporters always glossed over her long history of hawkish, arguably far-right, approaches to military matters. Those who mourn her loss to Trump today have completely forgotten that she convinced Obama to back military coups against the democratically-elected leaders of Honduras and Egypt. She also successfully advised advised Obama to arm and fund radical Islamist militias in Syria and Libya, plunging two modern Muslim countries into civil wars that have reduced them to failed states. Clinton’s famous cackle after a U.S. drone blew up Libyan ruler Moammar Khaddafi’s convoy, leading to his being sodomized by bayonet on video, is terrifying.

“It’s impossible to know which national security crises she would be forced to confront, of course,” Micah Zenko speculated in Foreign Policy in July 2016. “But those who vote for her should know that she will approach such crises with a long track record of being generally supportive of initiating U.S. military interventions and expanding them.”

Two months later, another FP writer penned an astonishing look behind the Kremlin walls at the thinking of top Russian officials worried about the U.S. election: “Moscow perceives the former secretary of state as an existential threat… That fear was heightened when Clinton surrogate Harry Reid, the Senate minority leader, recently accused Putin of attempting to rig the U.S. election through cyberattacks. That is a grave allegation — the very kind of thing a President Clinton might repeat to justify war with Russia,” wrote Clinton Ehrlich.

Would Hillary’s tough talk have triggered World War III with Russia by now? Probably not. But it’s not impossible — which shows us how far right she stands politically on the use of the force.

More likely and thus more worrisome, Hillary might have leveraged the current U.S. presence in Iraq and Afghanistan into attacks against neighboring Iran. “I want the Iranians to know, if I am the president, we will attack Iran” if Iran were to attack Israel — even if there were no Congressional authorization or a clear and present danger to the U.S., Clinton said in 2008. “And I want them to understand that… we would be able to totally obliterate them [to retaliate for an attack on Israel].” Unlike Iraq and Afghanistan, Iran has a real military and thus a real ability to defend itself — which would mean a long, costly and possibly unwinnable war.

Like Trump, Hillary would almost certainly be authorizing the construction, deployment and use of more assassination drone planes.

The one arena where most people agree that President Clinton would have been better than President Trump is presidential tone. Yes, “she does yell into microphones and speak in an overly enunciated voice—two factors that may make her seem abrasive.” But this is a woman whose campaign assigned 12 staffers to compose a tweet; they went through 10 drafts over 10 hours. There wouldn’t be any Trump-style 3 a.m. Twitter diarrhea coming out of a Clinton White House.

When George W. Bush was president, there wasn’t one morning I didn’t regret that Al Gore wasn’t there instead. Gore wouldn’t have invaded Iraq. He might not have gone into Afghanistan either. Unlike pretty much every other president, he cared about the environment.

There isn’t a single moment I miss President Hillary Clinton, though. Trump is a disaster, a real piece of crap. But everyone knows it. Because Trump is so loud and stupid and cruel and greedy and corrupt, all liberals and not a few conservatives clearly discern the true nature of his administration, and of the system itself.

If Hillary Clinton were president, the left would still be just as asleep as it was between 2008 and 2016. First woman president! Aren’t we just the best.

Meanwhile, the drones fire their missiles and U.S. troops and spooks prop up tyrants, and the filthy rich rake in their loot.

Trump gives us clarity. That is no small thing.

(Ted Rall (Twitter: @tedrall) is co-author, with Harmon Leon, of “Meet the Deplorables: Infiltrating Trump America,” an inside look at the American far right, out now. You can support Ted’s hard-hitting political cartoons and columns and see his work first by sponsoring his work on Patreon.)