SYNDICATED COLUMN: The Blame is Bipartisan: How the Democrats Ruined Central America and Worsened the Mess at the Border 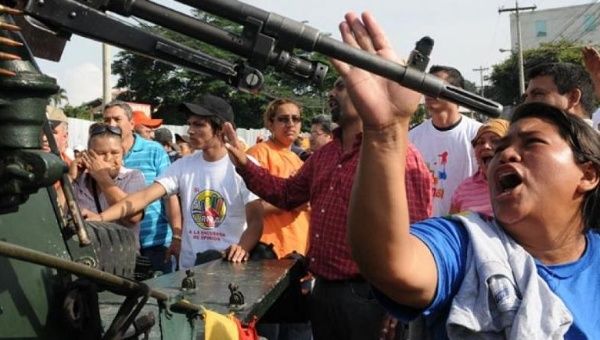 Those who forget history are doomed to repeat its mistakes blah blah blah, someone said —Americans don’t even pay attention to the news, so how the heck are they supposed to remember it after it becomes history?

So we keep making the same mistakes over and over. In foreign policy the biggest mistake the United States keeps making is interfering in the sovereign domestic politics of foreign countries it doesn’t know enough about. More often than not, the U.S. supports the wrong side: a privileged minority who oppresses the people, aka the majority. Eventually, because they are the majority, the people overthrow the jerks. Unsurprisingly to everyone except the State Department, the new government is pissed at the United States.

A classic example followed the decision of the CIA to arm the mujahedin in Afghanistan against the Soviets during the 1980s. The mujahedin gave rise to Al Qaeda, who caused us some sort of trouble in 2001 though I can’t remember exactly what happened there. Then there was the CIA-backed coup that ended the rule of the democratically-elected prime minister of Iran in 1953. I’d be shocked if five percent of Americans have heard of Mohammad Mossadegh, but the Iranians have and they remember and for some reason they just won’t shut up about it and sometimes they give our citizens a hard time.

Blowback isn’t always terrorism and it doesn’t always originate in the Muslim world.

At this writing the Trump Administration’s mistreatment of illegal immigrants attempting to enter the United States from Mexico has drawn international condemnation, and rightly so. The cliché that most migrants come here to pursue economic opportunities is out of date. Nowadays much if not most of the migratory flow is comprised of refugees from violence, specifically from the so-called “Northern Triangle countries” of Central America: Honduras, El Salvador, Belize and Guatemala. Homicide rates are especially high in Honduras and El Salvador. A 2015 Doctors Without Borders survey of refugees from these countries found that most Central Americans seeking political asylum on the southern border were fleeing physical attacks or threats of violence against themselves or a close family member. More than 40% had had a family member killed in the previous two years.

American officials blame the violence on the drug trade, and accept some responsibility by noting the U.S. demand for illegal narcotics that is behind the violence. But while drug cartels are indisputably a big part of the problem, what no one wants to talk about — especially not Democrats who are having a field day watching the Republicans get beat up in the polls because the optics of forcibly separating children from their parents are so hideous — is the U.S. interventionism, most recently carried out by former President Barack Obama, behind the disintegration of civil society in Central America.

Shortly after becoming president in 2009, Barack Obama and his bellicose secretary of state Hillary Clinton faced a foreign policy dilemma: what, if anything, to do about a military coup that toppled Honduras’ democratically-elected president Manuel Zelaya. As Al Jazeera remembers: “Latin American leaders, the United Nations General Assembly and other international bodies vehemently demanded his immediate return to office.”

The people’s will be damned; the U.S. government wanted Zelaya out because he was a leftist, an ally of Venezuela’s charismatic leader Hugo Chávez and an enemy of Honduras oligarchs, who had long been propped up by the U.S. and U.S. corporations. Zelaya’s crime: he wanted to reduce the country’s staggering chasm between a tiny clique of wealthy families and the rest of the population, who were desperately poor. But Obama had been elected post-Bush because he opposed the Iraq war. He couldn’t be seen as backing a Cold War-style intervention in favor of Latin American thugs.

So he played a double game. In public — after an embarrassing, telling silence — Obama decried the coup and called for Zelaya’s return to power.

Thanks to WikiLeaks we know that behind the scenes and in defiance of international law, Clinton reached out to the new junta leader to assure him of U.S. support and rejected the international community’s requests that the U.S. demand Zelaya’s reinstatement. The secretary of state worked hard to make certain democracy did not return to Honduras so that the new junta could remain in power.

The right-wing military junta, many of whom graduated from the Pentagon’s notorious assassin-training School of the Americas, were not good stewards. “The homicide rate in Honduras, already the highest in the world, increased by 50 percent from 2008 to 2011; political repression, the murder of opposition political candidates, peasant organizers and LGBT activists increased and continue to this day. Femicides skyrocketed. The violence and insecurity were exacerbated by a generalized institutional collapse. Drug-related violence has worsened amid allegations of rampant corruption in Honduras’ police and government. While the gangs are responsible for much of the violence, Honduran security forces have engaged in a wave of killings and other human rights crimes with impunity,” Al Jazeera reports.
Next door in El Salvador — the only other Northern Triangle nation with a higher murder rate than Honduras — Obama propped up sellout former leftist president Mauricio Funes, who abandoned his populist roots to open his country up to looting by transnational corporations. Poverty, violence and drug trafficking increased dramatically.

There is no excuse for the way the Trump Administration is treating applicants for asylum as they enter the U.S. from Mexico. But it’s worth noting that both major political parties are to blame here. Many of the children showing up at the U.S.-Mexico border are there in the first place because of the mayhem to which Obama and Clinton contributed.

SYNDICATED COLUMN: Those Kids Crossing the Border from Mexico Wouldn’t Be There if Obama Hadn’t Supported a Coup the Media Doesn’t Talk About

If you’re reading this, you probably follow the news. So you’ve probably heard of the latest iteration of the “crisis at the border”: tens of thousands of children, many of them unaccompanied by an adult, crossing the desert from Mexico into the United States, where they surrender to the Border Patrol in hope of being allowed to remain here permanently. Immigration and Customs Enforcement’s detention and hearing system has been overwhelmed by the surge of children and, in some cases, their parents. The Obama Administration has asked Congress to approve new funding to speed up processing and deportations of these illegal immigrants.

Even if you’ve followed this story closely, you probably haven’t heard the depressing backstory — the reason so many Central Americans are sending their children on a dangerous thousand-mile journey up the spine of Mexico, where they ride atop freight trains, endure shakedowns by corrupt police and face rapists, bandits and other predators. (For a sense of what it’s like, check out the excellent 2009 film “Sin Nombre.”)

NPR and other mainstream news outlets are parroting the White House, which blames unscrupulous “coyotes” (human smugglers) for “lying to parents, telling them that if they put their kids in the hands of traffickers and get to the United States that they will be able to stay.” True: the coyotes are saying that in order to gin up business. Also true: U.S. law has changed, and many of these kids have a strong legal case for asylum. Unfortunately, U.S. officials are ignoring the law.

The sad truth is that this “crisis at the border” is yet another example of “blowback.”

Blowback is an unintended negative consequence of U.S. political, military and/or economic intervention overseas — when something we did in the past comes back to bite us in the ass. 9/11 is the classic example; arming and funding radical Islamists in the Middle East and South Asia who were less grateful for our help than angry at the U.S.’ simultaneous backing for oppressive governments (The House of Saud, Saddam, Assad, etc.) in the region.

More recent cases include U.S. support for Islamist insurgents in Libya and Syria, which destabilized both countries and led to the murders of U.S. consular officials in Benghazi, and the rise of ISIS, the guerilla army that imperils the U.S.-backed Maliki regime in Baghdad, respectively.

Confusing the issue for casual American news consumers is that the current border crisis doesn’t involve the usual Mexicans traveling north in search of work. Instead, we’re talking about people from Central American nations devastated by a century of American colonialism and imperialism, much of that intervention surprisingly recent. Central American refugees are merely transiting through Mexico.

“The unaccompanied children crossing the border into the United States are leaving behind mainly three Central American countries, Honduras, El Salvador and Guatemala. The first two are among the world’s most violent and all three have deep poverty, according to a Pew Research report based on Department of Homeland Security (DHS) information,” reports NBC News. “El Salvador ranked second in terms of homicides in Latin America in 2011, and it is still high on the list. Honduras, Guatemala and El Salvador are among the poorest nations in Latin America. Thirty percent of Hondurans, 17 percent of Salvadorans and 26 percent of Guatemalans live on less than $2 a day.”

The fact that Honduras is the biggest source of the exodus jumped out at me. That’s because, in 2009, the United States government — under President Obama — tacitly supported a military coup that overthrew the democratically elected president of Honduras. “Washington has a very close relationship with the Honduran military, which goes back decades,” The Guardian noted at the time. “During the 1980s, the US used bases in Honduras to train and arm the Contras, Nicaraguan paramilitaries who became known for their atrocities in their war against the Sandinista government in neighbouring Nicaragua.”

Honduras wasn’t paradise under President Manuel Zelaya. Since the coup, however, the country has entered a downward death spiral of drug-related bloodshed and political revenge killings that crashed the economy, brought an end to law, order and civil society, and now has some analysts calling it a “failed state” along the lines of Somalia and Afghanistan during the 1990s.

“Zelaya’s overthrow created a vacuum in security in which military and police were now focused more on political protest, and also led to a freeze in international aid that markedly worsened socio-economic conditions,” Mark Ungar, professor of political science at Brooklyn College and the City University of New York, told The International Business Times. “The 2009 coup, asserts [Tulane] professor Aaron Schneider, gave the Honduran military more political and economic leverage, at the same time as the state and political elites lost their legitimacy, resources and the capacity to govern large parts of the country.”

Talk about brass! The United States does it everything it can to screw up Central America — and then acts surprised when desperate people show up at its front gate trying to escape the (U.S.-caused) carnage. Letting the kids stay — along with their families — is less than the least we could do.

I draw cartoons for The Los Angeles Times about issues related to California and the Southland (metro Los Angeles). This week: U.S. Border Patrol agents are asking Mexican and Central American TV stations to discourage illegal immigration. But simply reporting the news about the terrible US economy ought to do the trick.

Obama accuses his critics of hypocris on Honduras because, this time around, the U.S. is not lifting a finger to help remove a dictator–as opposed to its usual practice of working hard to install them.