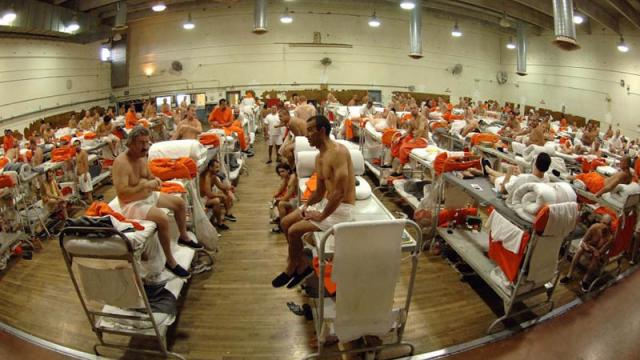 The Washington Post recently published a revealing and heartbreaking story about forced separation of children from their illegal immigrant parents — not the Trump-ordered fiasco we’ve watched over recent weeks at the U.S.-Mexico border, but in the Midwest as the result of brutal ICE raids that have ripped families apart under Presidents Obama and Bush before him. It’s beautifully written, worthy of a literature award if not a Pulitzer for journalism.

One line leapt out at me: “Who benefits from this?”

Nora, an 18-year-old girl who lost both her parents to ICE raids and is now raising her 12-year-old brother like something out of a dark 1970s ABC Afterschool Special or a Dave Eggers story, wondered why the U.S. government carries out such vicious policies and tactics, like using offers of free food to lure poor migrants into the clutches of heavily-armed immigration goons.

“Was it American taxpayers, who were paying to finance the raid and resulting deportations? Or American workers, most of whom were so disinterested in low-paying farm work that Ohio had announced a crisis work shortage of 15,000 agricultural jobs? Or Corso’s Nursery, a ­family-owned business now missing 40 percent of its employees?”

OK, so the canard about Americans being unwilling to fill low-paid agricultural jobs is transparent BS. The key phrase is low-paid. If all the illegal immigrants disappeared tomorrow the labor-market version of the law of supply and demand would force agribusiness employers to offer higher wages. Plenty of Americans would be happy to pick fruit for $25 an hour. Sorry, Corso’s — if you can’t afford to pay a living wage, you deserve to go out of business.

Still, Nora’s question is a good one. Whether you believe in open borders, want Trump to build The Wall or fall somewhere in between like me (build the wall, legalize the people already here who haven’t committed serious felonies, deport the criminals), everyone who cares about immigration should know the why and wherefore of how the U.S. government carries out deportations.

Contrary to what some liberals seem to believe, there is nothing unreasonable about border control. Determining who gets to enter your country’s territory, and who gets turned away, is one of the principal defining characteristics of a modern nation-state. Just you try to sneak into Latvia or Liberia without permission and see what happens. You can probably make it into Libya, but that’s because it’s a failed state.

After you catch illegal immigrants the question is, how do you deal with them?

Some countries, like Iran, deport unauthorized persons immediately, no due process. That’s what Trump wants to do.

Others treat them like criminals. Illegal immigrants caught in Italy face a hefty cash fine and up to six months in prison.

The United States falls in between. Applicants for political asylum are theoretically entitled to a hearing before an immigration court. Economic migrants receive no due process. Both classes face lengthy detentions before removal.

Lengthy detention is the key to Nora’s question.

The answer is: America’s vast, secretive, politically connected, poorly regulated $5 billion private-prison industry. “As of August 2016, nearly three-quarters of the average daily immigration detainee population was held in facilities operated by private prison companies—a sharp contrast from a decade ago, when the majority were held in ICE-contracted bedspace in local jails and state prisons,” writes Livia Luan of the Migration Policy Institute.

Crime rates have been falling for years. So prison populations have been declining too. Adding to the down trend has been a rare area of bipartisan agreement in Congress; Democrats and Republicans agree that we need criminal justice reform centered around shorter sentences.

Originally sold as an innovative market-based solution to alleviate overcrowding in government-run prisons and jails for criminals, the private prison sector had been facing hard times before Trump came along. Private institutions were sitting empty. Until two years ago, private prisons had been scheduled to be phased out entirely by the federal sentencing system.

According to the UK Independent ICE arrests during Trump’s first nine months in office increased 43% over a year earlier. “Many of those immigrants are funnelled into a multibillion dollar private prison system, where between 31,000 and 41,000 detainees are held each night. In many cases, those private prison corporations — led by the behemoths GeoGroup and CoreCivic, formerly Corrections Corporation of America — have contracts with the federal government guaranteeing their beds will be filled, or that they will receive payment regardless of whether they have a full house on any given night.”

With profits guaranteed by pro-business government contracts, Wall Street is bullish on prisons for profit. “The Trump administration’s tough-on-immigration policies are unlikely to fade anytime soon, meaning investors should expect continued strict enforcement, more arrests by ICE and the need to accommodate a growing number of arrested individuals,” an analyst advised investors.

That’s likely to continue. In a classic example of the revolving door between government and private industry, the CEO of GEO is Daniel Ragsdale, who left his post as #2 at ICE in May 2017. Talk about swampy: ICE is extremely cozy with for-profit prisons.

When your customer base is as disenfranchised, unpopular and defenseless as convicts and undocumented workers, it’s tempting to cut corners on costs for their care. Reports of abuse and neglect are even more widespread in the private prison sector than in traditional government-run lockups. “The conditions inside were very bad. The facilities were old. The guards were poorly trained. If you got sick all they would just give you Tylenol and tell you to get back to your cell,” said Adrian Hernandez Garay, who served 35 months for illegal immigration at the Big Spring Correctional Institution, a Texas facility run by the private corporation GEO. He told Vice he was fed rice and beans seven days a week. He described Big Spring as “far worse” than other prisons where he was held.

Even if you think illegal immigrants are criminals who should be tossed out on their ears, you ought to be highly suspicious of the private prison industry. After all, they don’t want illegals deported. They want them housed indefinitely in their sketchy facilities. And you’re paying the bill.

(Ted Rall (Twitter: @tedrall), the political cartoonist, columnist and graphic novelist, is the author of “Francis: The People’s Pope.” You can support Ted’s independent political cartoons and columns and see his work first by sponsoring his work on Patreon.) The Clash sang-advised: “know your rights.” But few people do.

President Donald Trump is hell-bent on deporting millions of people, including kids who came to the U.S. so young that they’re Americans in every way but their immigration status. He even signed an executive order that would allow the arrest and deportation of fully-vetted green card holders the authorities say are suspected of any offense — including a traffic ticket.

I don’t believe in open borders. A country that doesn’t control who enters its territory hardly qualifies as a nation-state. But let’s get real about the estimated 11 million illegal immigrants in the U.S. They’re not criminals. They’re victims.

Corporations strive to keep the wages and negotiating leverage of American workers low. They’ve pressured their pet politicians — both Democrats and Republicans — to increase the labor supply with immigrants both legal (e.g. the much-abused H1B visa program) and undocumented. Illegals are powerless and scared. Business can’t get enough of them.

If you’re un- or underemployed, illegal immigrants are your comrades. Your joint struggle should be fought against your mutual enemy, the cheap and greedy employers who deploy divide-and-conquer propaganda like Trump’s.

Like the people of Nazi-occupied Europe, we will someday be judged for our actions (and inactions) in response to the Republicans’ inhumane mass deportations. But what should we do? Unlike Europeans, white Americans never developed a culture of resistance or a system of ethical standards to which decent people are expected to adhere.

First, know your rights. Even if you’re here illegally, you have rights under the Constitution. However, the police and their colleagues in Immigration and Customs Enforcement don’t want you to know that — and they’ll lie straight to your face. So get educated about the basics.

If an ICE agent comes to your door, don’t answer. They can’t come in without an arrest warrant signed by a judge. If you talk to them, the ACLU advises, don’t open the door. If you do open the door, they may ask if they can come in. Say no. If they present a warrant for your arrest, don’t physically resist. Go with them. Simply demand to speak with an attorney and declare that you will remain silent. Then shut up. Always carry contact information for an attorney with you, and memorize his or her name and phone number since a card or phone will be taken away from you in jail.

If you are here legally, spread this information to people you know who are not.

Second, don’t snitch. If you know or suspect that someone is here illegally, do not tell the authorities or anyone in contact with them. At the bare minimum, discretion requires limiting your contact with members of law enforcement and, of course, ICE agents. Talking to cops or ICE agents is always fraught but never more so than now — so ethics-minded American citizens should break off contact with anyone they suspect of working for the deportation squads.

Morality dictates that you lie to police or ICE agents if they ask you for information about an undocumented neighbor. But be aware of the risks: Trump’s mass deportation order provides for criminal penalties for Good Samaritans “who facilitate [illegals’] presence in the United States.”

Finally, if you’re a deportation thug you must quit your job. Needing to earn a living does not absolve you from accountability for wrongdoing. Death camp guards and slave catchers had bills to pay too. They could tell themselves that what they were doing to get by was lawful. But it wasn’t right — and a lot of people knew that at the time.

Consider, for example, the case of Guadalupe García de Rayos. After 22 years in the U.S. — her parents brought her to the U.S. from Mexico when she was 14 — she was arrested by ICE agents in Phoenix, who deported her in 24 hours. She left behind two U.S.-born children, both citizens. How can those ICE idiots live with themselves?

It is better to sleep under a bridge and starve to death than to participate in a mass-scale deportation program targeted at the most vulnerable members of society — and the most law-abiding (except for their presence in the U.S.). On the other hand, there is incredible power in refusing to obey an immoral order. How long would Trump’s mass deportations — or his presidency — last if thousands of police officers and ICE agents were to call press conferences and resign rather than deport an innocent family?

I draw cartoons for The Los Angeles Times about issues related to California and the Southland (metro Los Angeles). This week: U.S. Border Patrol agents are asking Mexican and Central American TV stations to discourage illegal immigration. But simply reporting the news about the terrible US economy ought to do the trick.