SYNDICATED COLUMN: Hillary Doesn’t Care That Much About Abortion Rights 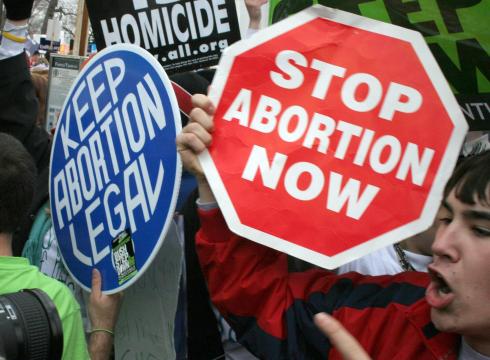 Hillary Clinton’s recent attack on fellow presidential hopeful Marco Rubio (R-FL) over abortion (“offensive,” “outrageous” and “troubling,” she said) reminded me of something I’ve been wanting to wonder aloud for some time:

Why doesn’t the Democratic Party call for a federal law legalizing abortion?

Thanks to the landmark Roe v. Wade decision, abortion is legal. Given the 5-4 balance of the Supreme Court barely in favor of that 1973 decision, however, federal abortion rights could vanish following the next vacancy on the high bench, especially if it happens under a Republican president. (Abortion would remain legal in liberal states.)

If Hillary, Bernie Sanders and Congressional Democrats really believe in a woman’s right to control her own body — for the record, I think they do — they should jointly endorse a bill legalizing abortion throughout the land.

It is true, of course, that full-throated support for reproductive freedom carries political risks.

With only 50% in support of abortion rights and 35% against, Democrats would risk losing some of the conservatives we used to call Reagan Democrats, or just swing voters, especially Catholics. Incredibly, you’re more likely to poke someone who likes gay marriage than abortion when you shake a stick.

Of even greater concern to Democratic strategists is losing leverage over their progressive wing. Following decades of marginalization and watching their political views overlooked in favor of Clintonite “Third Way” centrists, the left is disgruntled, voting and giving donations in smaller numbers. One thing that still motivates these liberals to turn out for Democrats is the prospect of a Republican-controlled Supreme Court, followed by the overturning of Roe v. Wade — a threat many social-issue liberal Democrats find appalling.

If Congress legalizes abortion, this motivation goes away — and leaves a party that went along with the wars against Afghanistan and Iraq, passed welfare reform, and enthusiastically pushed through a spate of free trade agreements viewed by economic populists as corporate giveaways that kill American jobs.

This is almost certainly why Hillary Clinton talks a good game on abortion — and that’s where it ends. She just doesn’t care enough to take a chance.

Despite the downsides, Clinton, Sanders and the party ought to press for a federal bill. Bill Clinton and Barack Obama played to the polls, the latter endorsing gay marriage, saying his views had “evolved” only after surveys told him it was safe. Voters are starving for leadership, for politicians who point the way forward, telling us where we should go before we form a national consensus.

Certainly, such a move would solidify support for the party among women by signaling that it is willing to take risks. The bill could go down to defeat. But legislative defeat could become a moral victory, as in Ellen Pao’s unsuccessful sex discrimination lawsuit.

It would also put Congressional Republicans on the spot, forcing them to go on the record as voting against abortion rights — which most American women support. This tactic, forcing opponents to vote “nay” so you can beat them up with attack ads later, is rarely used by Democrats. I don’t understand why. Is the SCOTUS threat really so powerful that it justifies the real possibility that tens of millions of women and girls in conservative Southern states will lose abortion as an option? Aren’t strategists worried that, at some point, liberal women in particular will get wise, and ask the same question I’m posing here: why don’t Dems even try for a federal abortion-rights bill?

If nothing else, it would be nice to see an end to the 42-year-old ritual of protests outside the Supreme Court in Washington, attended by pro-choice and pro-life factions yelling insults at each other.

It’s time for American political culture to get real and grow up about abortion. It’s silly and weird and unproductive for a major nation to remain so paralyzed so long over such a major issue. Women deserve to be able rely upon more than a flimsy court decision.

There ought to be a law — and Democrats should lead the charge.

(Ted Rall, syndicated writer and the cartoonist for ANewDomain.net, is the author of the book “Snowden,” the biography of the NSA whistleblower, to be published August 25th. Want to support independent journalism? You can subscribe to Ted Rall at Beacon.)